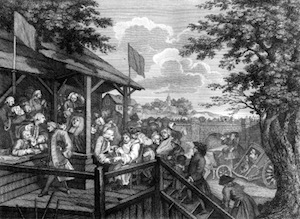 If you’ve been online for a while, you may have already heard of services like SurveyMonkey, Wufoo, and PopSurvey. (And if you haven’t, hop on over to those sites and check ‘em out).

Surveys can be a great way to keep your finger on the pulse of your prospects and clients.

They help you know what your audience thinks is important, what they want more of, and what motivates them to buy or change their habits.

But that isn’t the only thing surveys can do.

How do I know? I just completed one of the biggest surveys of my self-employed life (and learned more than a few things in the process).

Now, thanks to Copyblogger, I get to share some of those goodies with you …

The back story (Caution: Your eyes are bigger than your stomach)

One of my big goals this year was the completion of a market research project. But not any old research. Nope.

When I say big, I mean big, hairy, and audacious enough to make your eyes water.

Big enough to break new ground. Big enough to catch the attention of thought leaders. Maybe even big enough to get on the radar of the government officials whose job it is to support and promote the growth of small businesses everywhere. (A girl can dream, right?)

And perhaps it was that statistics class I had in college. Or maybe it was just hubris.

But I really felt that collecting enough data to be “statistically interesting” was not completely out of reach.

The kicker: in order to gather that much data, I was going to need some help.

I knew from past experience, that if I asked my email list to complete a survey (and it was the only request I sent them in that email), the response rate was usually in the neighborhood of 20-25%.

I also knew that I would need at least 1,000 responses if I was going to be able to extrapolate any of that data to the rest of the solopreneur population.

The next task was to recruit those partners!

Who do you know? (and more importantly, who do you want to know?)

First I made a list of every person I had a connection to — weak or strong — who also served my target audience.

My little pitch explained the project and what kind of data I hoped to collect.

I showed them how the information could be useful to them. And I offered some link juice and recognition on the survey itself and the resulting full-length report I would write when we were done. I promised to share all the raw data with them before anyone else.

I was very happy with who said yes. No, it wasn’t quite 50 partners. But it was pretty darn close. And a few of those folks had sizable enough lists that I felt good about hitting our goal for responses.

One of those was the proverbial frosting on the cake: The marketing department of one of my vendors agreed to help. We had a long conversation by phone and they told me I was one of their “power users” and that they’d like to see if there were other ways we could work together, too. (Score! We’re already working on our next project together.)

Lesson: You accomplish so much more when you collaborate with people. Especially those you might consider your “competitors.”

Remember that the CAN-SPAM Act prohibits you from adding folks to your list willy-nilly (something you don’t want to do anyway, ever, CAN-SPAM or not).

And just because someone gives you their email address as part of a survey does not mean they want to get marketing messages from you.

Knowing that if I explicitly told folks they’d be added to my mailing list, they’d probably opt out of the survey, I played it safe. Here’s what I did instead:

I put together a list of enticements — several items donated by myself and the other survey partners — as a way to help folks say, “Sure, I’ve got 5 minutes to take your survey.”

Respondents were able to include their email address if they 1) Wanted to get the Summary Report and 2) Wanted to be included in the raffle drawing.

How’d I get such a great response? I promised not to use their email address for ANYTHING else. That I would protect their privacy at all costs.

So how will this build your email list, you ask?

If they don’t choose to grab the helpful solution(s), then yes — they’ll be lost forever. But it’s more important to keep my promise and leave them alone, if that’s what they’d prefer.

Know, Like, Trust. It’s a process that can’t be rushed.

Lesson: Don’t get greedy. Look at each respondent as a person, not an email address. Take the opportunity to build trust and start a relationship with them. You’ll have a lot less unsubscribes going forward.

Mining for gold with an open-ended question

Most people don’t possess the skill to avoid introducing bias into multiple choice questions. Open-ended questions work because they allow people answer in any way they like.

The open-ended question are where you’ll find the very best (and most profitable) stuff. Our question on this survey was a follow-up to an earlier multiple choice question:

Please expand on your answer to Q1. What have you tried? What’s keeping you from getting results?

When the survey was over, I printed out more than 85 pages of responses to this question! Definitely better reading than the morning paper. Just grab a highlighter and a cup of coffee and you’re set. (Note: It took me three sittings to get through it all.)

In hindsight, I probably could’ve asked a better question. After reading over 1,100 answers, I can tell you there are still things I’d like to know. But they’re specific to my business so I’ll have to save them for a future research project. (Research is never done, my friend.)

What IS significant is that I now have a great (and long) list of ideas for new products, services and yes, even blog posts. AND I’ve got the problems expressed in my audience’s own words. Which will help me know just how to write the copy so it hits home.

Lesson: Think carefully about what kind of information will help you to help your audience. The best questions bring out the best answers.

Dishing up authority and social proof

The good news is that we collected enough responses to have some data that would be officially “statistically interesting.”

And the survey we conducted? It was on a topic that had never been documented before (at least, according to Google).

Knowing that this could be an important piece of research for lots of people, I’m publishing an in depth report and will focus my efforts on its wide distribution. (Note: If the topic of solopreneurs and their online marketing habits, successes and failures is of interest to you, see the link at the end of this post. The report will also detail how the survey itself was marketed and what lessons were learned along the way).

I also created an infographic and a summary report for the general public. I anticipate that these will be cited by others in as-yet-to-be produced content of their own. In fact, a few of my research partners are already developing some of it. (Stay tuned!)

Lesson: If you can publish some solid research — especially on a topic that hasn’t been documented before — you’ll become an authority in your audience’s eyes as well as Google’s.

And that’s more fun than a barrel of survey monkeys.

Editor’s Note: Though Copyblogger has never performed a single survey (yet), Brian Clark nonetheless swears the audience told him everything he needed to know.

Tea Silvestre (aka The Word Chef) is currently finishing up, "Solopreneurs and Online Marketing: What They're Doing, What's Working and What's Failing." You can sign up to get a copy of the report when it's done baking here. Or, follow her on Twitter @TeaSilvestre to stay in the loop.

Previous article: A 10-Point Plan for Connecting with Online Influencers (Without Turning into a Suck-Up)
Next article: 7 Marketing Articles Worth Reading