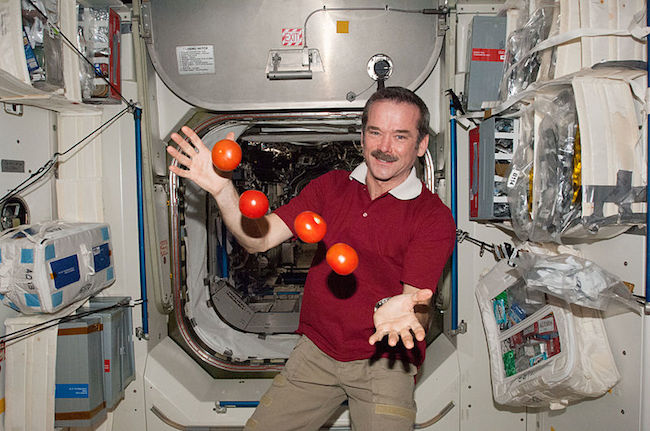 I remember the first time I saw it. Canadian astronaut Chris Hadfield, then commander of the International Space station, had taken his guitar into space. He posted a simple but powerful video of himself performing David Bowie’s classic “Space Oddity” — in space. (Note: Sadly, the license for the video has expired, so for now it’s not publicly available.)

As far as I’m concerned, this pretty well cemented his position as coolest dude there has ever been. I mean, Canadian plus astronaut plus Bowie? That’s the trifecta of cool right there.

(Plus he juggles. In space.)

Like a lot of people, I assumed that Hadfield had an amazing innate understanding of what worked and didn’t work as content. He had been posting neat and interesting content to the web for months —- great tweets and YouTube videos on funny, everyday aspects of life in space.

They were memorable, they were highly shareable, and they paved the way for that 20-million view bombshell.

So imagine how surprised I was when I read Hadfield’s biography — and found out that when he was getting started, he was actually sort of an idiot about content.

But he knew where to go for help … the kind of help that you might benefit from as well.

Hadfield was on Twitter fairly early on … but (by his own admission) his content was pretty bad.

It was boring. It was dry. It wasn’t well suited to the medium.

Fortunately for us, Hadfield’s son Evan is really smart about content. He helped his dad understand what kind of content was worth posting — and would get people talking.

Evan continued to work with his dad on how to make his content more remarkable — up to and including suggesting the Space Oddities cover, and working on securing the rights and getting the video edited.

Chris Hadfield is arguably the most effective promoter for space travel since human beings first landed on the moon. But he couldn’t have done it without his behind-the-scenes help — the “entreproducer” who understood how to make it rain.

In other words, Evan was the one in charge of guiding his dad’s presence and keeping the Seriously Cool factor cranked up to 11.

This is the role a professional content strategist or new breed copywriter can play for you.

You might have amazing abilities. Maybe you’re the equivalent of a space station commander in their field.

But that doesn’t mean you understand anything about what makes content memorable.

It’s possible you’ll still be the one who writes at least some of the words. (It was Chris Hadfield who actually wrote all of the tweets; Evan just provided the guidance and took care of a lot of housekeeping tasks.)

The words matter, but the strategy matters even more.

When you hire a copywriter or content strategist, you may be paying for their wonderful words (or video and audio skills, as the case may be). But remember — you’re also paying for their rainmaker hat.

Keep the world’s coolest person in mind when you’re looking for a writer for your website. What you need is someone who knows how to make you remarkable and memorable.

Previous article: 5 More Great Speakers for Authority Intensive (Event Now Sold Out)
Next article: How to Make Your Content a Star