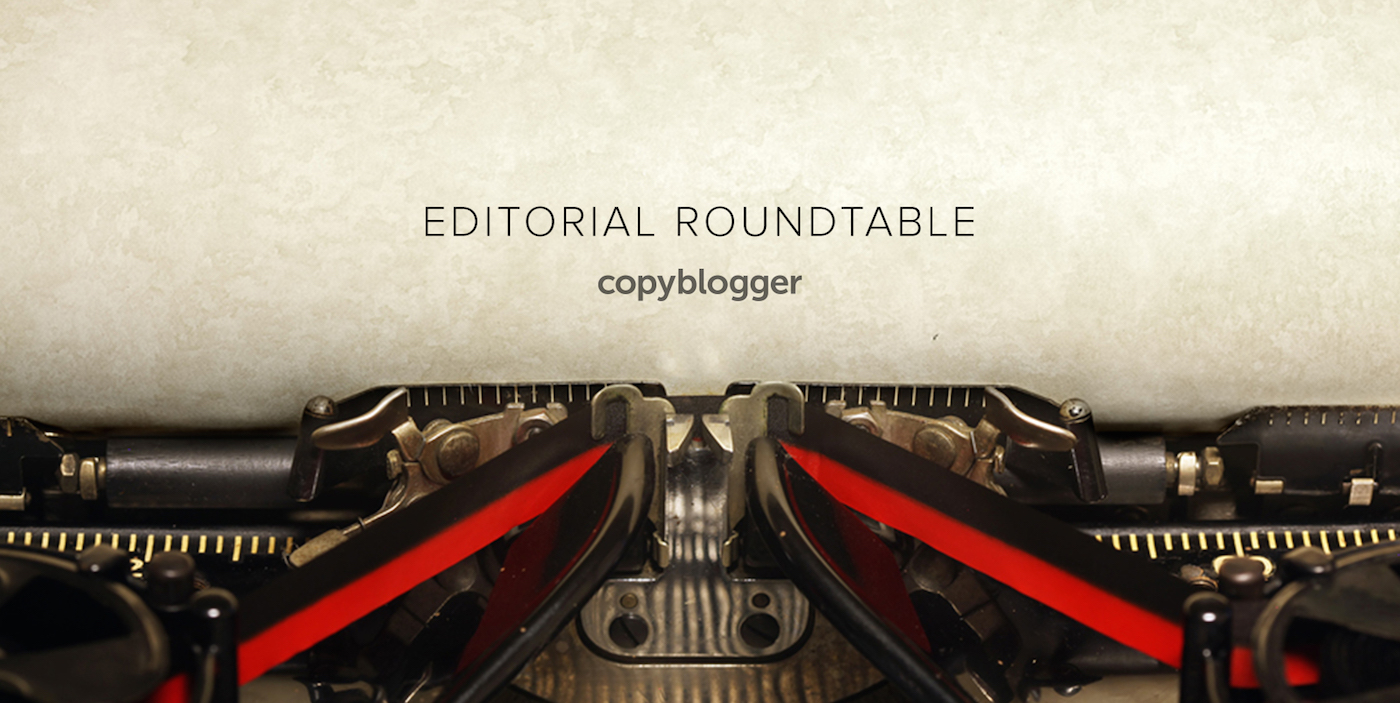 I’ve said for a long time … writers are magicians.

We make something out of nothing. We take syllables and turn them into dreams, sights, sounds. Calls to action and detailed plans for shenanigans.

And as every magician knows, if you want to perform magic … you have to know a thing or two about ritual.

Nearly every writer I know is a bit superstitious about writing rituals and habits. So this month, our Editor-in-Chief Stefanie Flaxman suggested we share them with you (plus photos of our desks).

I won’t promise that these rituals will make you more creatively productive … but crafting a ritual of your own just might do the trick.

Each member of the editorial team was invited to share their own habits and preferences on the following points:

Setting: My desk is my favorite place to concentrate on writing.

Time of Day: I like drafting and jotting down notes all day, every day. But my butt-in-chair writing time typically happens in the afternoon, after I’ve already completed my editing work for the day. That routine works for me no matter what type of writing I’m working on, but morning or evening writing sessions definitely happen when the words have already written themselves in my head and I need to get them out.

Tools: MacBook Air and an outline in a Moleskine notebook. If I start a digital draft before sketching out an article in a notebook, it usually takes me longer to tie all of my ideas together.

Music or Silence?: I write with music. Sometimes a topic I’m writing about will inspire me to listen to a specific album. If that doesn’t happen, The Decemberists Radio or Tom Waits Radio on Pandora are my default writing stations. Editing and proofreading happen without background noise. 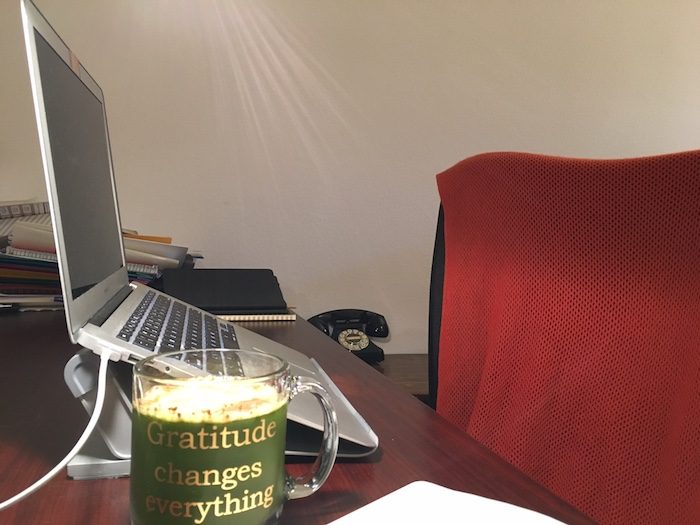 I have far more resistance to doing planned video where I show my face than I do writing, though I can do webinars, podcasts, or even live streams on short notice.

Setting: I have to sit at my desk with my desktop computer. Nothing else allows me to get in flow.

All social media, bings, beeps, and visitors must be banished. I have the good fortune, now that my role has changed, that it is okay not to be on Slack all the time. I love my colleagues, but the “got a minute” messages always seem to be when I have almost figured something out …

That said, stepping away from the challenge, getting angry at Facebook, then taking a sip of coffee can often reset the noggin to the point where I can have another go at a stubborn piece, too.

No lunch until I have made progress. Lunch is for closers. If I have lunch before I have gotten some good progress, then my productivity drops massively. My afternoons are best talking or brainstorming until my second wind at 6:00 p.m., which I am guessing comes from my programming days. I have a third bout of creativity around midnight.

Beverage: Anything coffee, but usually regular Canadian donut store coffee. We walk the dog down to the coffee shop quite often, which in itself sets me up better to be productive.

I have to be caffeinated, though.

Music or Silence?: Silence to write, music to edit (though it can’t have much in the way of discernible lyrics — soundtracks are good, or very instrumental prog rock such as Pink Floyd or Marillion). 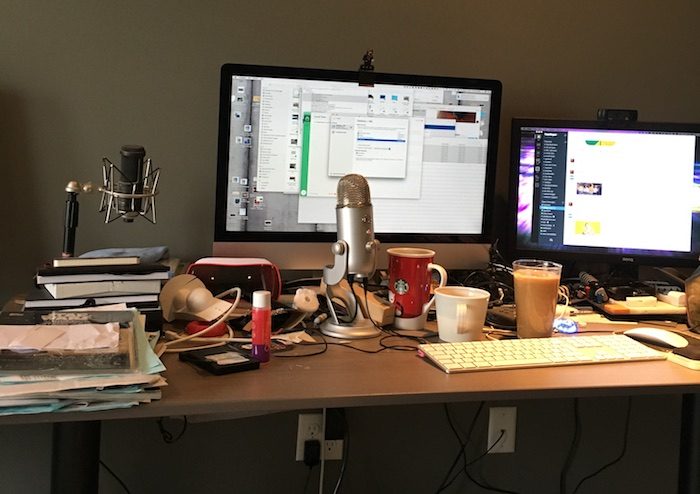 Whether I’m working on a writing project or multimedia production, my habits and rituals tend to be pretty similar.

Setting: I’ve had great success working in coffee shops on tight deadlines, and studies show that working in a public space somehow motivates one to be more productive (not necessarily more cogent — interesting note there).

But I find that scheduling chunks of time, uninterrupted writing sprints in the privacy of my office with short breaks for coffee and stretching, is most productive if I have enough time to let a project marinate before editing.

I always come back to:

Time of Day: I’m best first thing in the morning after breakfast and coffee — kid is at school, no one’s in the house kind of early — until lunch.

I will get a second wind of creative flow from 3 to 6 in the evening, and occasionally after 10:00 p.m..

Tools: Thoughts that I can capture typically land in a small, pocket notebook that is always nearby, and if deemed useful, find themselves on a yellow legal pad in scrawled, rabid sentences that need to be vaccinated and put on leashes.

Healthy sentences often migrate to a full-fledged outline on 4X6 cards that pile up and must be clipped together. A Google Doc is another favorite for getting them all in one place.

Finally, a blank text document will be opened and a terrible first draft will emerge. A first draft needs air. I generally try to walk away from it as long as possible, and then get some fresh eyes on it before attempting to forge it into something anyone would ever want to read.

Music or Silence?: Ambient music I can ignore on the headphones. (Spotify is home to a lot of music for concentration.) Film soundtracks are great for productivity, as are simple white noise apps with rain and whatnot. 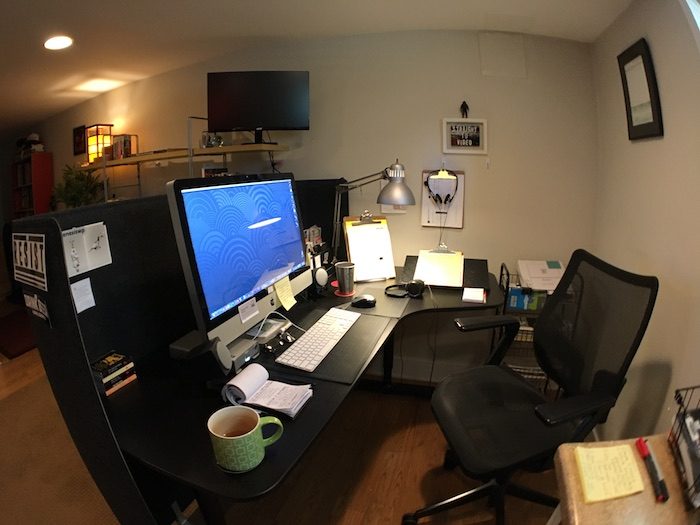 Setting: I prefer to be at my desk, where I have my laptop stand and favorite keyboard, as well as my external monitor. It’s where I’m most comfortable. The only issue is the occasional distraction of a wife and little baby that rarely yield even to closed doors. 🙂 But that’s quite all right. I don’t mind the distraction.

Time of Day: I write best in the morning or late at night. I’m typically at my worst in the early afternoon.

Beverage: Coffee, or if it’s after noon, then water. I’ve tried doing the write-with-a-beer or write-with-a-bourbon thing, but it rarely works.

Music or Silence?: When I’m writing, it has to be silence. I can never quite get into the flow when music is playing. 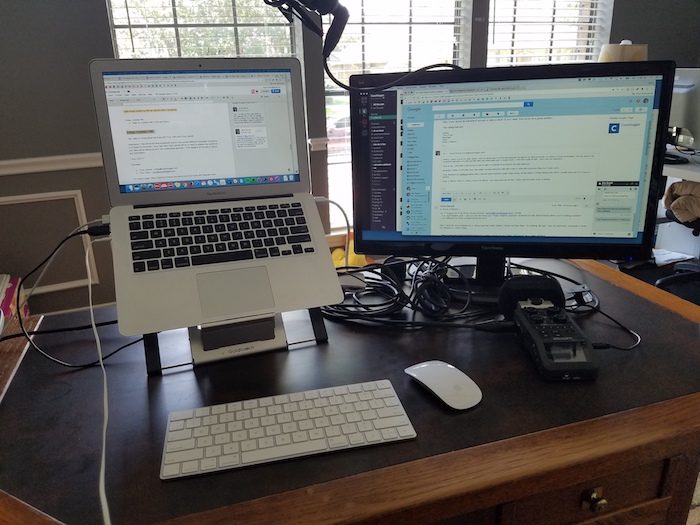 I tend to have the same routines for whatever I’m working on, although doing my best work writing often involves a lot fewer distractions, whereas when I’m doing data work and writing reports, I may be able to keep chat open.

Setting: Depends on the time of day. In the mornings I like to be at a quiet coffee shop (preferably where people don’t know me and therefore don’t try to talk to me), and in the late afternoon I prefer to be at home.

Beverage: Cappuccinos or matcha lattes at the coffee shop, tea or coffee at home (with a mug warmer — I can’t drink lukewarm coffee!).

Tools: Laptop with email and chat closed. Sometimes I’ll even turn WiFi off if I know I won’t need it for research. Headphones are required. For my reports I use Google Docs, but when I’m working on a true writing piece I prefer a plain text editor.

And no phone. Having my phone anywhere near me — even just in the room — is a huge productivity killer. I usually leave mine downstairs most of the day, and only check it on breaks.

Music or Silence?: Music, but it can’t be distracting. Either it has to be music I’ve practically memorized or instrumental (more mood/ambient than classical, though). 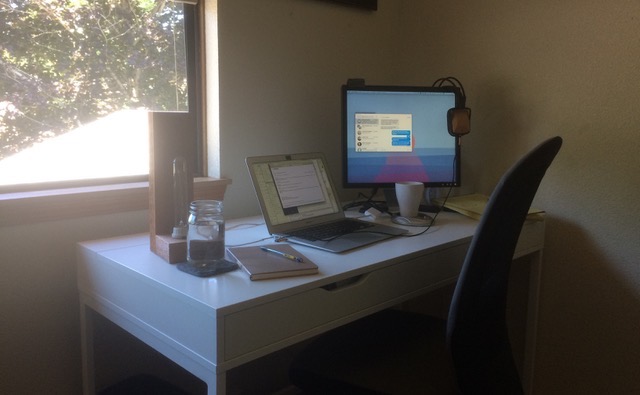 Setting: Travel has made me pretty flexible about where I work. While I was living in Rome, I had a cute (tiny) IKEA desk wedged into the living room of my apartment. Now I’m back in the States and back at my giant old oak desk — a gift, long ago, from my landlord, who couldn’t fit it onto his moving truck.

My real workspace, though, is my MacBook Air, and sometimes it makes a good break to just sit in a comfy chair or in a coffee shop somewhere. I worked on the couch a lot when I was in Italy.

Time of Day: Shifting time zones recently means I’m re-finding what works best for me. Mid-morning is always good, but that’s often when I’m scheduled for a podcast, or a recorded call for the Authority community or Digital Commerce Academy.

I usually get some good creative time in the afternoon as well, before-dinner rather than after-lunch. And I’ll often get another surge of energy in the evening after dinner.

I admire people who can work early in the morning, but if I’m awake in the early hours, I’m not sentient.

Beverage: Every day must begin with two whole milk cappuccinos. After that, it’s cup after cup of Celestial Seasonings Bengal Spice tea. Club soda works if it’s hot outside.

Tools: Previously mentioned MacBook Air is a must. My mic is a Heil PR-40, or if it’s an interview, I use a gamer’s headset mic. I also find it useful to scribble things compulsively in a physical bullet journal (Leuchtturm1917 dot grid, hard cover, blue).

I always write my drafts, which I code in simple HTML markup as I’m writing, in a text editor.

My Fitbit nags me to get up once an hour and walk around a little bit, which seems to be good for my brain as well as helping me stave off various diseases …

Music or Silence?: Never music. If there’s a lot of auditory distraction around, I’ll fire up the rainymood.com site or app and plonk my headphones on. 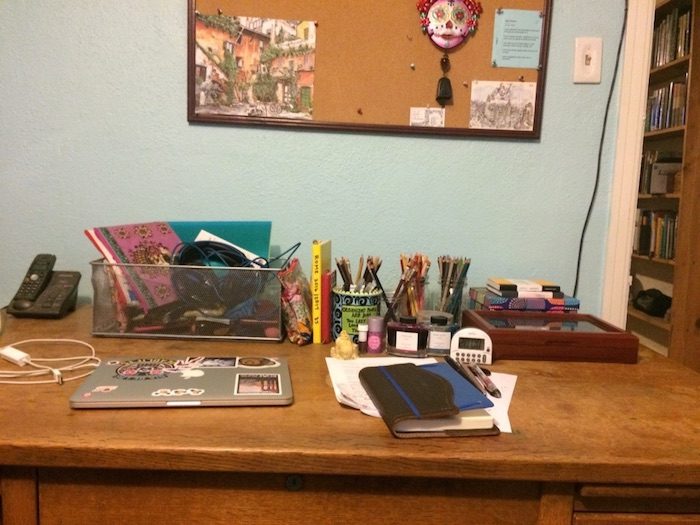 Got any writing rituals? Any special beverages, tools, or audio environments that make the words come?

Let us know in the comments. 🙂

Previous article: 5 Steps to Website Security You Can Trust
Next article: The Resource You Need to Move Your Digital Business Forward