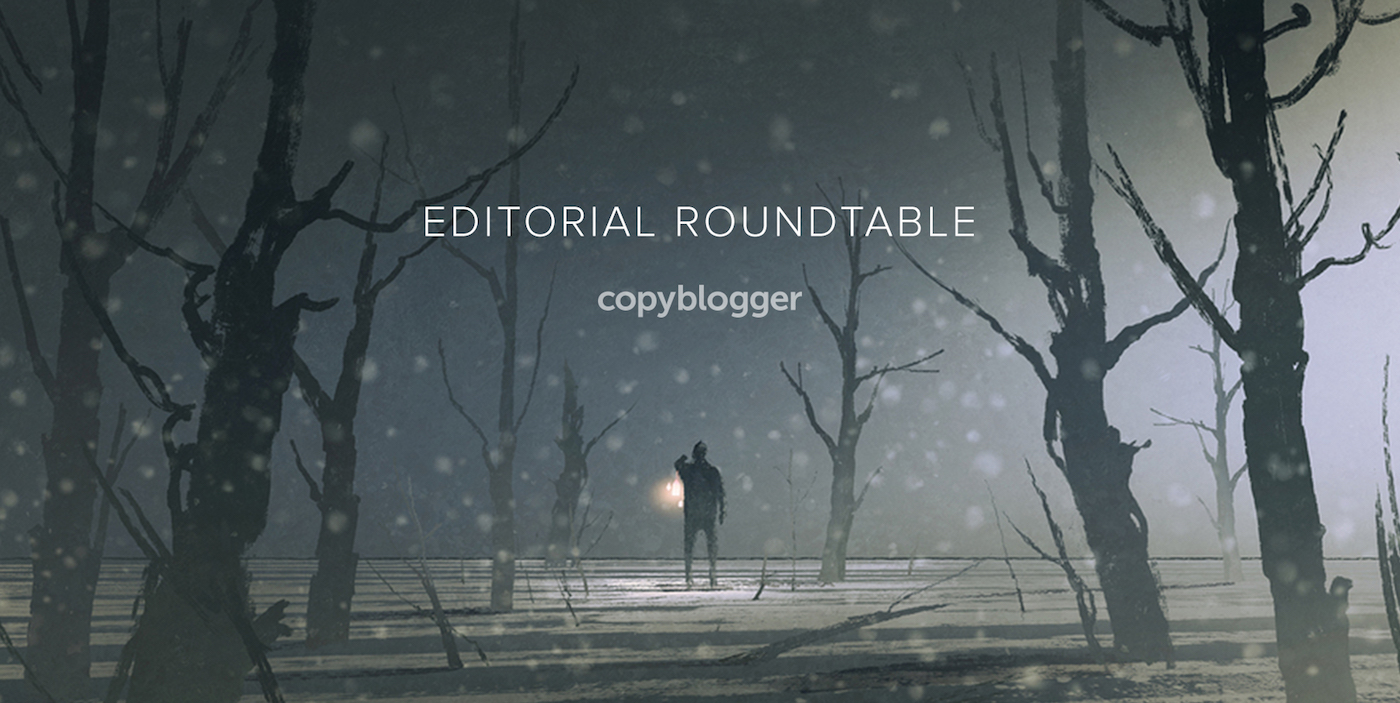 It seems straightforward enough. We human beings are innately verbal creatures. Writing is just taking the language we dream, think, and speak in, and arranging the words on some paper or a computer screen.

So why is it so hard sometimes?

I think it’s because the same inventive brains that gave us Harry Potter, A Midsummer Night’s Dream, and The Matrix are also fiendishly clever at dreaming up horrible scenarios that our writing will lead us to.

And that’s just from mixing up your and you’re.

It’s often struck me that some of the most talented writers have some of the weirdest goblins racing around their heads during the writing process.

So in honor of Halloween, I thought it would be fun to ask the team about their deepest, darkest writing fears for our October roundtable.

Here’s what they came up with.

Last week, in 21 Productivity Hacks from 21 Prolific Writers, Kelton shared a quote from Kevin Kelly with us:

“ … So that means writing stuff that won’t be used, but I have to go through the process.

“That’s painful because when I’m writing it usually isn’t very good. I know I’m not saying anything new … it feels like I’m inadequate … the usual fears that artists have. ‘I’m not very good at this.’”

I resonated with that one, but I think it’s a great fear to have because it shows you’re able to look at your work objectively — that you have a critical eye and aren’t in love with everything you create.

When I’m worried something I’m writing isn’t original, which is most of the time, it pushes me to be more creative and add more of my own voice to the topic.

My fear is based around my usual anxiety about being judged, impostor syndrome, failure, etc. I have zero fears about the work of writing — it’s other people reading that is my fear.

BTW my fear increased 1000 percent when I joined Copyblogger.

Editorial note: Aw! We’re sorry we scare you, Chris. We think you’re swell and we love your incredibly useful posts.

Kim has been writing a lot of internal content these days for our company intranet.

Because I never had a writing job, I felt like I wasn’t entitled to be called a “writer.” What experience or authority gave me the ability to write?

So when I started writing the intranet posts, I felt like everyone would hate them. I was happy that Stefanie and Jerod would edit them, that was my security blanket.  But then as I continued, I gained more confidence. I was so proud of myself.

So you don’t always have to be an editor or a writer to get good at writing. I think that the more you actually do it, the better and easier it gets. As your confidence grows and your fear wanes, you just get better.

(Also get yourself a Stefanie if you can.)

Fear of mediocrity is a big one for me. How do you keep your writing from blending in to the crowd, especially since it’s easier than ever for anyone to share their writing? Diversity and democratization of writing is a wonderful thing, but it definitely adds some anxiety on the individual level, at least for me.

And, of course, impostor syndrome. Whenever I’m writing to teach (whether it’s about riding motorcycles or website analytics data), I have to fight the urge to qualify everything I say with the fact that I’m a relative newbie. It’s not a bad thing to let people know your background, but you can’t let it undermine your message.

I have this ridiculous fear that language in general, but especially the words that I manage to get onto the page, will suddenly become arbitrary or ambiguous, like unintelligible code in some enormous matrix that no one will ever understand, let alone read.

Imagine writing your extensive Senior thesis for a graduate course, then learning that you’d written it in an extinct language that no one could translate. Pretty crazy … or is it?

I seem to spend much of my professional life being terrified of things, but probably my greatest writing fear is being wrong on the internet.

I take anything I write online (sometimes up to and including tweets and Facebook posts) through round after round of self-questioning. Is this true? It it helpful? Why do I believe it? Is the evidence for it compelling? Does the other side have a point?

Possibly the resulting work strikes some people as verbal Ambien. (Hey, insomniacs, if you think my writing is sleep-inducing, you should listen to my podcasts!) But I’ve been online long enough to properly put my foot in it more than once, and I put a fair amount of effort into making sure I can stand by what I say and write.

Got any odd fears or anxieties when you sit down to write?

Share them in the comments! It will help you get braver, and you’ll let your fellow writers know that they are not alone.