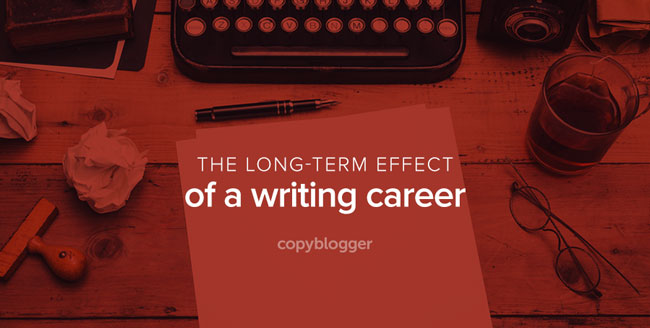 “What’s happened to you is rare,” my friend Mark told me in a conversation that persuaded me to quit my job and write full-time.

“Nobody saw it coming. I know you and I didn’t see it coming.”

That was it. The day I decided to become a writer.

After that conversation, I gave my notice, found a nice corner in our house for a desk, and started writing. The rest, as they say, is history.

In three years, I published four books, built a seven-figure business, and hired a team to work for me. More importantly than all of that, though, I found my calling.

I discovered a deep satisfaction in the work I did and the people whose lives my work touched.

And that, as Mark said, is rare. But it doesn’t have to be.

Looking back years later, I realized none of it would have happened if it weren’t for my commitment to writing.

How writing can enrich your life, minus the Kumbaya

Today, we hear a lot about the power of content. We hear how words can make you rich, how blogs can make you famous, and how writing can sell your products and services.

All of those possibilities may be true, but rarely do we hear enough about the ways in which writing can enrich our lives. And that’s just what it’s done for me.

Don’t get me wrong. This isn’t some Kumbaya crap.

I love making a living off my writing and being able to support my family doing something that is a lot of fun. But the truth is, all the money in the world isn’t worth doing something you hate.

Writing changed my life in every possible way. It awakened me to my purpose when I wasn’t sure I had one and helped me navigate the temptations of fame and success when they were most alluring.

So, here are three benefits of writing that you may have overlooked and a practical step for each to help you become more of a professional in the work you do.

“I write because I don’t know what I think until I read what I say.” – Flannery O’Connor

I write to figure things out. And in that figuring out of things, I discover what I want to say. This is called your voice and it’s the greatest tool you will ever have as a writer.

People get this wrong all the time. They think that your voice just magically appears one day. But it doesn’t work like that.

Don’t wait for clarity to write. Write your way into clarity.

I did this by starting a blog and using it to practice daily for an entire year. Each day, I woke up, wrote 500 words, published those words on my blog, and then continued on with the rest of my day.

At first, it was awkward. But eventually, it became habitual. Even easy. That’s the power of daily practice. Over time, I even began to find my voice.

When I started at the beginning of the year, my message was confusing and clunky. By the end, I was confident about what I had to say.

The more I practiced, the better I got. And honing your craft should never be taken lightly.

No matter what, write a little bit every day.

Try starting with 500 words, using a free daily prompt like my500words.com. The goal is quantity, not quality. Quality comes with time.

2. Writing gives you an audience

“Your audience is one single reader. I have found that sometimes it helps to pick out one person — a real person you know, or an imagined person — and write to that one.” – John Steinbeck

When I started that blog many years ago, I just wanted to share my ideas with the world.

Of course, I hoped someone would listen. I think we all want that. But I had no idea who would hear my words or how.

Soon, I started to understand that what I wrote wasn’t just for me. These words were meant for others too.

As I practiced, people began showing up on the blog. At first, it was only a few people, but eventually many more. One weekend, I had more than 250,000 people visit my blog. Now millions of people read that blog every year.

But can you imagine if I set out to reach all of those people — all at once — in the beginning? It would have been paralyzing.

I started writing for basically just myself. Maybe for one reader who needed what I had to offer. That’s it. No grand delusions of going viral or any of that nonsense. Just writing to help one real person. That’s all you can do.

Practice in public. Use a blog or website to display your writing so that as you get better, people can see you improve. Grow your audience gradually.

Everyone in the world is looking for one important thing: connection.

Originally, I thought writing was a form of self-expression. And it is. But it is also a wonderful way to help others.

One way to help others is to first share how you’ve helped yourself. Hidden in your experience is an expertise other people need.

Here’s a recent example. For years, people asked me how I became a writer and I didn’t have an explanation.

Initially, I just thought they were being polite. But then I realized everyone is looking for the answer to the question: “What am I supposed to do with my life?” And then: “How do I get started?”

So, I started writing down my experiences and interviewing others as well. I put everything I learned about discovering your vocation into a book called The Art of Work.

That book became a bestseller. Why? Because I had some big, world-changing idea? Not at all. Because I listened.

Writing gave me the ears and the empathy to hear my audience. I was able to listen to what they were struggling with and then help them.

As you write, listen to the comments and questions people ask. You’ll likely find inspiration for your next creation.

So, what does this mean for you?

Of course, these are all non-monetary benefits. Or are they?

I suppose you could also easily apply these same lessons and action steps to a business and use them to benefit the bottom line.

You could use writing to:

And if you did that well, you might have both a successful business and something much more satisfying than just a job. You just might have found your calling.

At least, that’s what writing did for me.