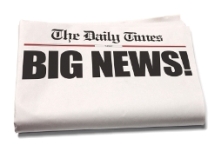 When you write a post for your blog, your headline is the last thing you should be thinking about.

OK, I realize this is Copyblogger heresy.

There’s a lot of emphasis on writing a good headline. Hell, I’ve written posts about how to write an eye-grabbing title myself. Brian wrote an entire series on headlines (including a post on why you should always write your headline first), and he’s been known to come up with some pretty catchy ones.

But while crafting a good headline is critical to getting people to read a blog post, open the email, or get past the headline to the copy, it’s actually the last thing you should be thinking about when you first sit down to write.

Get this wrong and you can mess up a lot of potentially awesome headlines.

Your headline could fit the perfection checklist to a T. It could be a list with a number. It could have action words. It could be creative, intriguing, ask a question, be a little crazy, hint at a secret. But if it isn’t written for the right audience, you’re screwed.

That’s a pretty decent headline right there. But if the majority of your audience is work-from-home mothers, that headline isn’t going to get you as far as it would if you were writing for an audience of straight single men.

Know who your audience is, and know what kind of language appeals to them. Lexi Rodrigo wrote a post not too long ago about feminine words that sell. There were plenty of responses to that post in the comment section, some of them from women saying which words wouldn’t necessarily appeal to them, and why.

You have to get in the brain of your audience, and you have to know the words that work for them.

There are no short cuts. It’s not just about appealing to women or men — the question is, which women or men. You have to figure out your precise audience, and you have to write directly to the way those specific people are feeling when they read your post.

What do you want them to do?

If your blog attracts new customers and enthusiasts, then every single post you write should let your audience know what you want from them.

Now hang on there — before you run away because you run a strictly informational, no-sales blog, we’re talking to you too.

Even if you have no intention of getting sales from your blog, you still want your readers to do something.

You want all kinds of stuff. And yeah, sometimes you even want sales. But before you scribble down that headline and start writing, you need to know what you want. Then you need to leverage your headline to make sure you get it.

What are you going to give them?

Brian recommends writing your blog title before you write the post, and I agree with that as a general rule. Writing down your headline reminds you of what the focus of your post is supposed to be.

But even if you haven’t written the post yet, you still need to know what you’re going to be writing about. This makes logical sense — and oddly, a lot of people don’t seem to think about it.

They say they’re going to offer you “10 Secrets of Copywriting” and they write that headline down, but what they end up writing about is common knowledge on every marketing blog out there.

Before you write your headline, you need to know you’ll back up the promise it’s making.

All right, then. Have you thought about all that? Good. Now you’re ready to tackle the last thing you need to think about:

What’s your headline going to be?

Your headline might need to be last on your task list, but last doesn’t mean least important. Often, it means just the opposite.

How about you? What else do you think people need to do before they get to their headlines?

Get our best copywriting tips in one free ebook

Sign up below to get our free ebook, Copywriting 101 – How to Craft Compelling Copy, plus our weekly roundup of Copyblogger articles.