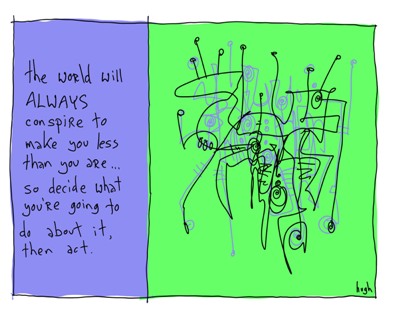 There’s a scene in “Mad Men”, the TV drama about a 1960s advertising agency.

One of the junior copywriters is showing the Creative Director an ad he’s just written. The ad is clever, flowery, and poetic.

The Creative Director cuts the copywriter down in five short, stern words:

“Don’t write for other writers.”

I’ve seen this happen a lot in the blogosphere. I’ve done it. You’ve probably done it, too.

But there’s a downside

Traffic spikes can be quite addictive. The type of blog post that might get you a lot of “bloggerly love” may not be (and probably isn’t) the kind of blog post that gets people to buy whatever it is you’re selling.

Traffic and influence are great. It’s lovely having all these people kissing your hiney at social media conferences.

But at the end of the day, it’s not the A-Listers or the pajama-clad, Web 2.0 basement-dwellers who are paying your mortgage. It’s the regular shmoes with a regular problem who are willing to pull out their credit cards to get it solved.

Back in 2005, I was working with Thomas Mahon to create the blog EnglishCut.com so Tom could sell his $4,000 hand-made tailored English suits.

When I first started talking about the idea, a lot of people said,

Those people were making the same mistake as the copywriter on Mad Men. That guy thought that just because he was writing, he was trying to impress other writers.

These people thought that just because we were blogging, we were trying to impress other bloggers with our product.

We were writing and blogging about suits for people who loved suits.

And it worked. Spectacularly well. These days, for every suit order Tom accepts, he has to turn down four or five offers. He’s just too busy now.

Five years later, I’m applying what I learned with Tom to my own art business.

I never think about traffic any more. I think about my friends and people who can and want to support my business. “Bloggerly Love” might be good PR, but it’s a hugely unproductive time-sink if you spend too much time worrying about it — which many people do.

Worry about the people who really matter to you. Create killer content that really matters to them. Create a killer product people actually want to buy.

Do that, and you’ll find very little reason to worry what writers think.

Hugh MacLeod is a cartoonist who blogs over at gapingvoid.com. He makes his living by selling fine art prints, doing “Cube Grenade” commissioned art work and sending out daily cartoons on “Hugh’s Daily Frickin’ Newsletter.”

Hugh MacLeod is lead artist and co-founder of Gapingvoid, a management consultancy that uses art to transform business. Clients include Microsoft, Roche Pharmaceuticals, Rackspace, and Zappos. He blogs over at hughcartoons.com. Follow him at @hughcartoons.

Previous article: The Myth of Beautiful Web Design
Next article: How to Sell Without a Sales Pitch