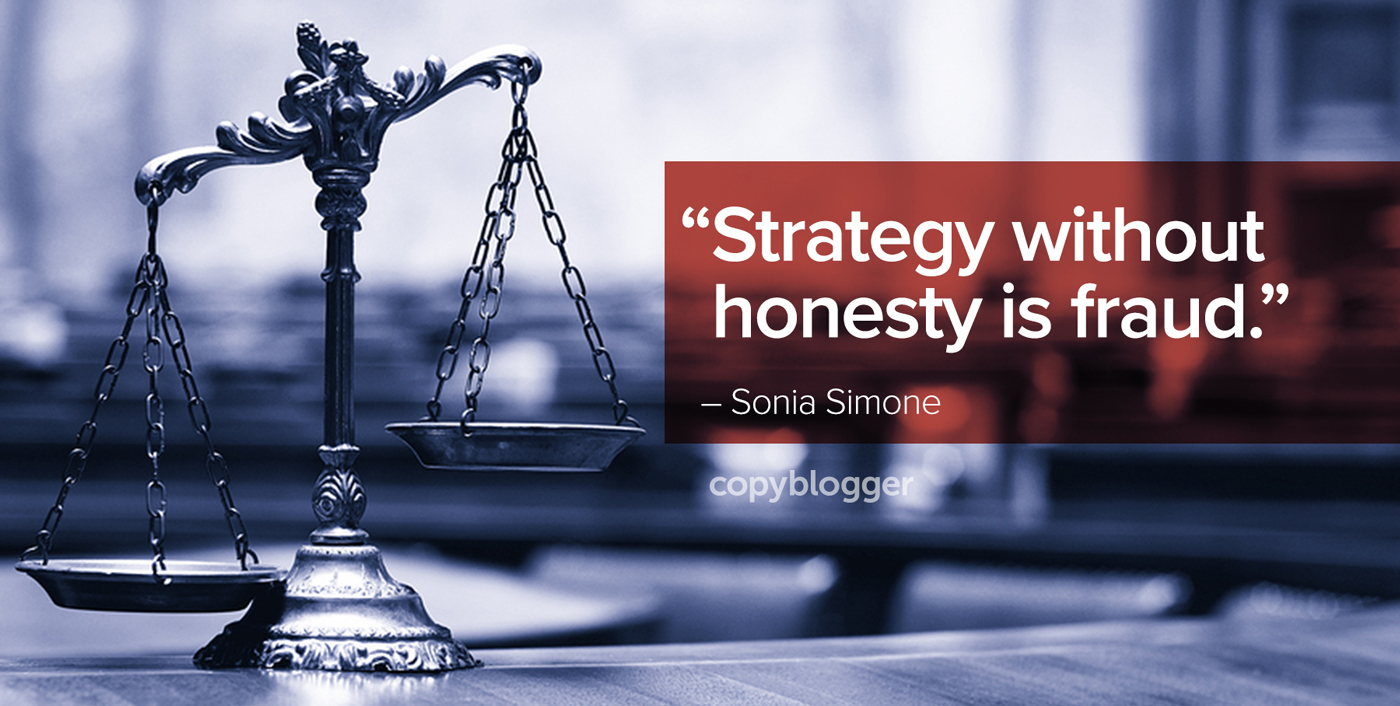 We all know how we feel when we run into creepy, pushy salespeople, right?

In fact, the last thing we want to do is make a purchase from that person.

That’s the promise of content marketing — to deliver a relevant business message without becoming a total saleshole.

And yet, too many companies pump out massive volumes of content without seeing real results. Where are they going wrong?

Let’s start by looking at where content marketing came from … and some misreadings of its key ideas.

Today’s content marketing was informed at the beginning of the new century by two massively influential books.

The first was The Cluetrain Manifesto, published in 1999. Many of its “95 Theses” could be published in any good article about content marketing strategy today:

3. Conversations among human beings sound human. They are conducted in a human voice. …

32. Smart markets will find suppliers who speak their own language. …

68. The inflated self-important jargon you sling around … in the press, at your conferences — what’s that got to do with us? …

75. If you want us to talk to you, tell us something. Make it something interesting for a change. …

80. Don’t worry, you can still make money. That is, as long as it’s not the only thing on your mind.”
– a few of the 95 Theses from The Cluetrain Manifesto

Cluetrain helped us see that markets (that is, people) didn’t owe companies their time or attention.

Seth Godin’s Permission Marketing, also published in 1999, gave us some thoughts on how we could earn that attention with content that had intrinsic value.

That combination of Cluetrain and Permission Marketing was a jolt of smart, prescient fresh air.

But it’s always possible to grab hold of new ideas and run straight in the wrong direction.

The rise of “Miracle Marketing”

You might remember what online publishing looked like in the early 2000s. In 1999, a programmer named Peter Merholz coined the word “blog” (shortened from “weblog”). Five years later, it was Merriam-Webster’s word of the year.

The early 2000s were all about blogs. And what was the word on everyone’s keyboards?

The idea was that if only we could be authentic enough, if we could be earnest and genuine and completely transparent, our products and services would “sell themselves.” Strategy and salesmanship were “fake” and to be avoided at all costs.

Allow me to take a moment to share a maxim I call Sonia’s Law:

Sonia’s Law: Nothing Sells Itself.

The admired experts of the day told us all that if we were extraordinarily “authentic,” all good things would miraculously follow.

Have an extraordinary conversation, wait for a miracle to happen, and you’d have a thriving business.

In the middle of all this appeared a heretic called Brian Clark. He looked around and noticed that none of the success he had seen with his digital businesses came from this “strategy of no strategy.”

He thought it would be interesting to look at the intersection between the strategy of persuasion (copywriting) and the zen anti-strategy of online community (blogging).

He looked for the underlying persuasive patterns in those techniques — studying everyone from “Mad Men” like David Ogilvy to social scientists like Robert Cialdini.

He also looked at the tremendous power of digital community. The way that the web allowed people to connect to one another — and to companies — more freely and spontaneously, without traditional gatekeepers.

And he pointed out that you could be strategic and genuine. You could craft an authentic message that was easier to notice, act on, and share.

It didn’t make sense to use a 20th-century advertising style, where you could reliably buy an audience’s attention. As Godin had pointed out, that just didn’t work after the internet blew a hole in broadcast media’s monopoly on attention.

You had to tell human stories, stories that resonated. To say something worth saying. To earn audience attention.

But to think that strategy had no more role to play was just … silly.

You can be honest and strategic

In fact, you have to be.

Strategy without honesty is fraud.

Strategy is how you can structure your content to communicate to the right people, with the right information, and in the right language.

As Brian wrote on Monday, strategy is understanding Who you speak to, What they need from you, and How to express those ideas in a way that will resonate.

Trying to be so strategic that you turn into a robot, or so completely “authentic” that you avoid any strategy, will both lead to failure.

Those companies creating mountains of content without seeing meaningful results? They’re often falling to one side or another of that line.

If strategy is inherently fake, then so are proper usage and spelling. So are stories and metaphors. So are editing and style.

Good strategy shouldn’t mask your intent — it should clarify it.

There’s nothing dishonest about putting your best foot forward.

And there’s no great virtue in wandering around the web and hoping money bumps into you.

Previous article: Why Your Greatest Asset May Be Slowly Eroding (and How You Can Rebuild It)
Next article: How to Attract Your Ideal Customer with Perfectly Positioned Content