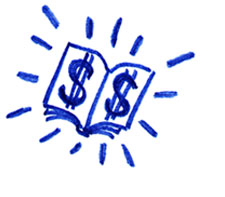 Back in early 2009, Naomi Dunford of Ittybiz announced that she’d taken on a guinea pig. And, because it was Naomi’s guinea pig, it had a fair amount of attitude and tended to swear a lot.

This guinea pig explained its presence in the IttyBiz big picture by telling a story about what online marketing looked like from the average customer’s perspective:

For those of you who haven’t checked it out, IttyBiz’s “Online Business School” course teaches you how to make money online. Let me repeat that phrase, and then we can all go take a shower: “Make money online.” Ugh. The phrase stinks like a Teletubbies reunion. Why? Because nobody thinks that a real person can do it. Not really. They think it’s a scam. Or, they think that gurus can do it, maybe, but not real people…

So I says to Naomi, I says, “Why don’t I use your stuff and your advice to make money online. Publicly. And show everyone that an average guy who’s never done this before can actually do it. And you can coach me through it. Make course-corrections. Turn me into a millionaire. And together, we can make this whole ‘make money online’ thing a reality for everyone”…

Interesting hook, right? Unknown guy who’s never made a cent online before uses blogger/marketer’s product to see if he can make a career out of nothing. It’s the ultimate case study because everyone gets to see that it wasn’t a handpicked, standout success highlighted only after it worked.

And of course, let’s not forget the very real possibility that it may not work — suspense on top of hope!

For anyone who doesn’t know the story above, I was that guinea pig. What I think of as “The Johnny Experiment” on IttyBiz did, in fact, work rather nicely.

In the intervening year and a half, I’ve given some serious thought to why exactly it worked. I decided that while there were a lot of reasons, the magic ingredient was giving people a great story to follow.

What I learned as a guinea pig

Let’s acknowledge and set aside the mechanical, nose-to-the-grindstone factors that went into building my business. I had to work hard, and I had to have skills people wanted (at the time, setting up blogs and websites), and I had to make and then keep my commitments. All very important, but similarly all very known. Is anyone surprised that you need to work hard to build a business, or that you need to know what you’re doing?

But here’s another rhetorical question: Is anyone out there doing all of the above stuff correctly and still getting nowhere? Any talented, hard-working, professional fledgling businesspeople out there who can’t seem to get anything going?

Knowing the skills isn’t enough. If I learned anything outside of the OBS course material and Naomi’s colorful tutelage, it was that in order to succeed in this space, you need for people to like you and to be interested in you. It sounds trivial, but it is absolutely essential.

The way you do that is through story.

Why your story matters

A lot of details had to fall into place in order for me to turn the story of the average-guy-turned-experiment into an actual business, but the story itself was the hook that made any of it possible. I was a regular guy. The people who read my IttyBiz posts were regular people. Logic said that if I was successful, then they could be too.

But the story thing goes further. It had to. I started my fledgling business by giving things away (first a free report and then free blog setups), but none of that mattered without engaged people to take advantage of that free stuff. I had to keep people coming back, and back, and back.

I wanted to be like a good TV show or a good book. I needed my story to be interesting enough that people wanted to keep following it.

I could beat this to death, but here are a few elements of my story that kept readers tuning back in. Check out how they mirror fiction:

Get the idea? Your business needs fans, and even though you’re in the world of nonfiction, you get those fans the way any great serial work of fiction gains fans — by crafting an interesting character and spinning a compelling yarn.

How to craft your story

What I’ve done in creating the story of Johnny B. Truant (which is totally true, but shaped by fictional influences) wasn’t really strategic. I fell into it because I’ve always written short stories and even a “closet novel,” and I’ve read innumerable books written by other talented folks.

But once I realized that stories work and why they worked, I started coaching people in the telling of their own stories. And I’m not alone.

Take the Reinvention Summit. When Michael Margolis asked me to participate in his virtual summit on storytelling (which is going on right now), I thought it sounded interesting. He told me about all of the great people — like 25 of them — that he’d gathered to discuss the importance and the future of narrative and story.

Very cool, but there are dozens of various summit-style products in our sphere every year. I didn’t figure it’d be making any waves or anything, especially given that translating “storytelling” to “business and moneymaking” isn’t easy for some to get.

But I was wrong. I’ve been following this thing and WOW is it a packed and amazing production. Check out the lineup (and check out the price while you’re over there … it’s kind of ridiculously low.)

Every one of the speakers is talking about the use of story in the way I talk about it. Copyblogger has been talking stories as marketing vehicles for a long time, so I should mention now that Copyblogger is a proud media and marketing partner for Reinvention Summit, and, like I said, I’m a presenter.

Why is a conference on story called the “Reinvention” Summit anyway?

My IttyBiz story was also a story of reinvention. I was a real estate investor who was circling the drain, and I had to rethink my entire existence and adjust to avoid being sucked down.

Luckily, you can still join the Reinvention Summit. It’s a huge event, and runs until the 22nd, but you get all of the sessions that have already been conducted (including mine) as recordings.

As for the live events, I’ve never seen something quite so interactive and organized. Chat live, follow and meet and interact on social media, bonus materials and webinars, you name it. A lot of events borrow the name “Summit,” but this actually feels like you’ve attended a live event and are going to individual sessions.

Make the time to craft and start telling your story. It’s important.

About the Author: Johnny B. Truant took his business from nothing to six figures in a year thanks mainly to storytelling as marketing. He’s one of 25+ speakers at the Reinvention Summit, running right now. He also plays the musical blender with his bandmate, Marty the Rabbit Boy.