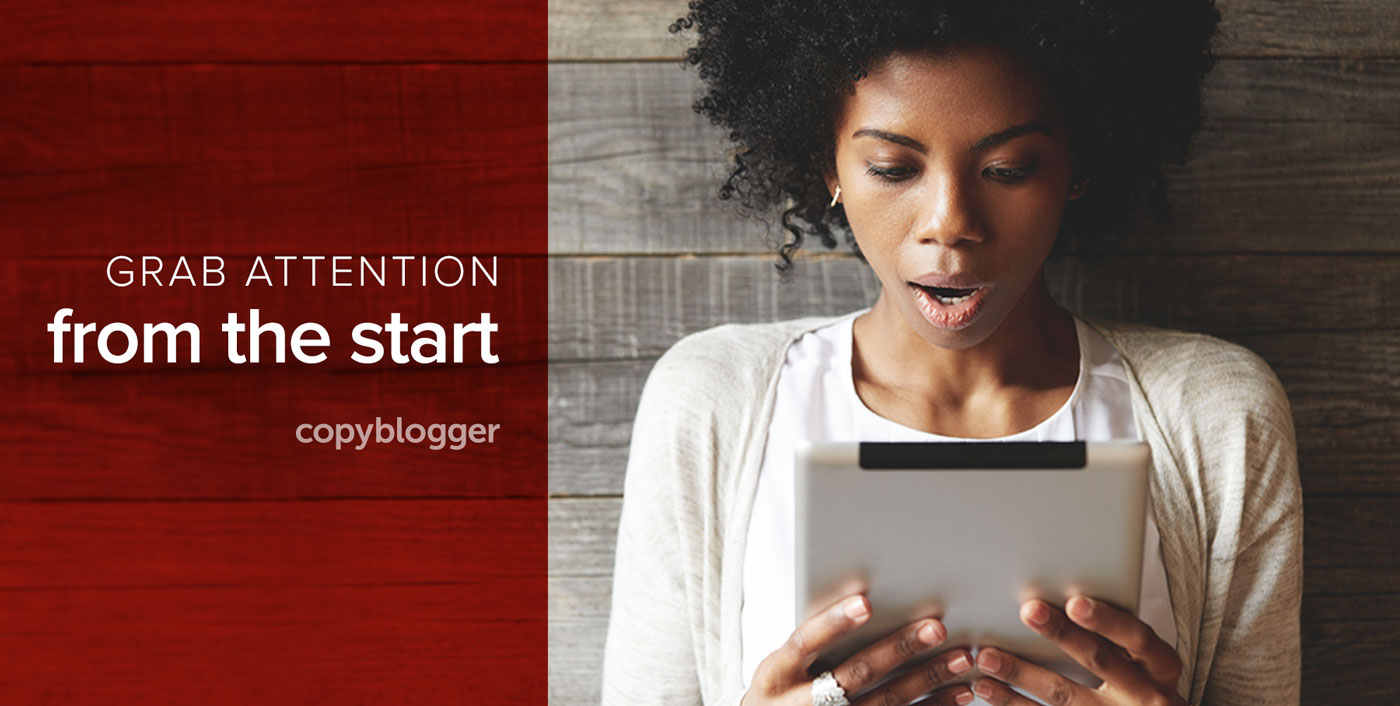 That is global health and data expert Hans Rosling’s opening line of a 2010 TED Talk, as he stands on stage with a bundle of laundry and a washing machine. Rosling does what the best presenters in the world excel at; in a matter of seconds, they get and keep your attention.

When you write content, your job is similar to someone standing on stage. Your readers are distracted and you have mere seconds to get their attention.

To grab and keep your audience’s attention, it’s best to use at least one attention-grabbing method that yanks your readers into your articles by creating intense curiosity.

3 ways to hook your readers

In this article, I’ll present the following three attention-grabbing techniques, with examples of how they can be used in your content:

Method #1: Story of a demonstration

Notice how this article started with a description of Hans Rosling standing on stage.

And what was he doing on stage? He was holding a bundle of laundry while standing next to a washing machine. He then proceeds to talk about the process of washing clothes. While he goes about the demonstration, your eyes are riveted to what he’s going to do next.

Rosling is lucky — he’s on stage and can do a physical demonstration. But when you write an article, you have to tell a story about a demonstration instead.

To do this, roll out your story as if the audience were watching and listening to find out what happens next. When you use a “demonstration” to start an article, the most mundane actions come to life.

“Have you ever tried to peel a clove of garlic before? If you’ve done it the old-fashioned way, you’ve probably taken five minutes or more to separate the cloves, cut each clove in half, and peel off the skin. But what if you could peel the garlic in 10 seconds? Here’s what to do: Hit the garlic with the base of your palm so the cloves separate. Then take the separated cloves, put them in a container and cover it with another container. Then shake the heck out of the garlic and — like magic — the garlic is peeled.”

In the example above, you followed along, didn’t you?

Not only did you follow along, you wanted to know what came next.

When you use a story that involves a demonstration, you pull the reader through your content. Then once you’ve gotten to the end of your story, you simply connect it to the rest of your article.

Rosling’s washing machine demonstration may seem like a mundane example, but when placed at the start of an article, it forces you to follow along to find out what happens next.

A demonstration is only one way to get your readers’ attention. The second is a case study.

Did you know Airbnb was suffering as a company until Barry Manilow’s drummer became a customer?

Sound interesting? Case studies — whether historical or current — attract readers because they want to know what happens next and why things unfolded the way they did.

Why was Airbnb in trouble in the first place? What’s the weird connection between Airbnb and Barry Manilow’s drummer? And how does all of this connect to the rest of the article?

As the Airbnb story goes, the founders were keen to offer accommodations similar to bed and breakfasts. That required the owner to be around when a guest arrived and stay in the house or apartment as well. But Barry Manilow’s drummer didn’t want just a room; he wanted an entire apartment.

That was a pivotal moment for Airbnb. And here’s the connection to the rest of the article:

We often formulate our own ideas when clients have much better suggestions for how we can run our businesses. By listening to their real customers, Airbnb found a way to offer lodging that has broad appeal.

See how the story got your attention? Remember how the washing machine demonstration kept you riveted?

An opposing stance is when you present an argument that seems to conflict with your own headline.

Let’s say you’re writing an article on “how to learn quickly.” In the first paragraph, you would offer a point of opposition.

You could deride “speed reading” and talk about how reading faster merely exposes you to more information, rather than creating a lasting understanding of the topic you’re reading about.

You’ll then explain that while slowing down and taking notes may seem time-consuming, it’s the most efficient way to retain what you’ve learned.

You teach your audience “how to learn quickly” — it’s just different from what they might be expecting to hear, so it wakes them up and gets them to focus on your content.

Hans Rosling speaks about global health and data. They’re complex topics that audiences might have trouble connecting to, but Rosling’s speeches are adored by the public. And there’s a good reason why — he’ll use demonstrations, case studies, and even the power of opposition in a single speech.

He’ll start off with one concept, then move his way through the information and bring up the other elements — forcing you to pay rapt attention.

Great speakers know that the audience is restless. They know the previous speaker may have bored them out of their minds with graphs and endless facts and figures. That’s why they use stories, case studies, and opposition.

So, when you write, take a cue from a great speaker to keep your readers absorbed as you take them through the rest of your article.

Which attention-grabbing techniques do you use in your writing?