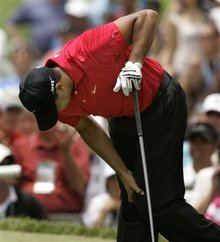 After hearing he had a torn ligament and a double stress fracture of his left tibia two weeks before the U.S. Open, Tiger Woods looked at the doctor and said, “I’m playing in the U.S. Open, and I’m going to win.”

Win he did, which is amazing in its own right. Even more remarkable is the level of dedication and focus Tiger had to play 91 holes over five days on a severely injured knee that was getting worse.

But the thing that truly demonstrates the man’s character is he never mentioned the torn ACL or the stress fractures. Some talking-head pundits were speculating as recently as yesterday that the knee wasn’t all that bad.

Tiger may have used his golf club as a cane, but he refused to use his injury as a crutch. It would be easy to let the media know how bad the knee was as an easy advance excuse for losing.

His silence makes for a more legendary story, right?

It’s a lot easier to succeed online than it is to become the greatest golfer who ever lived. But to succeed, you do have to have dedication and focus.

And when you encounter obstacles, you make adjustments, investments, and even sacrifices. But never excuses.

About the Author: Brian Clark is the founding editor of Copyblogger, and co-founder of Teaching Sells and Lateral Action. Get to know Brian better by following him on Twitter.

Previous article: Three Questions Your Copy Must Answer to Succeed
Next article: 3 Simple Steps for Driving Your Audience to Action