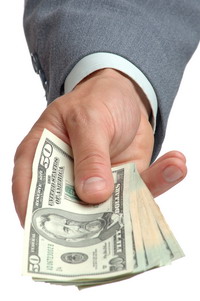 Do you ever feel like the world is starting to look at lot like Bladerunner? Or maybe Minority Report. Something by Philip K. Dick, anyway.

We’ve got ads on grocery receipts, ads on toys, ads on cars, ads on diapers, ads superimposed on top of other ads, ads that look like tv shows, ads that look like movies, ads in our email box, ads in our snail mail box, ads in church, ads at school, ads on airplanes, ads in restrooms. Of course, that’s in addition to the traditional ads on radio, television, magazines and newspapers.

There are even ads on Sesame Street. Nothing is sacred.

In Philip K. Dick’s future universe (which was actually the late 20th century), we’ll have to pay extra to keep ads from being piped into our dreams. It sounds completely plausible to me.

If advertising is dead, why won’t it go away?

With all this advertising going on, you might think that advertisers were getting great results. But the more ads that clutter our consciousness, the fewer ads we’re actually able to perceive. We tune them out without even trying.

As a species, we’re hard-wired to filter out the irrelevant. That came in handy when we were living in caves and needed to focus all our attention on what we could eat or what could eat us. And now it lets us spend twenty minutes stuck in traffic behind a bus without ever noticing the ad on the back of that bus.

Advertising gets louder or more provocative to try and recapture our attention, but it doesn’t take long for us to tune that out, too.

If you need to find a market for what you’re selling, you’ve got a challenge. Because even as it marches toward covering every square inch of the earth’s surface, traditional advertising gets closer to being completely broken every day.

The more ads we see, the more we tune them out. The more ads we tune out, the more “impressions” advertisers need to run. They place more ads, and the cycle repeats itself until we’re all sick to death of it.

Those two still matter, but they’re overshadowed by two new pieces—referral and conversation.

In the new model, you don’t push advertising onto your customers whether they want it or not. Instead, you create a message worth passing along from person to person. Your message isn’t broadcast from one to many, but referred from many to many.

A woman tells her sister about a great site to learn about taking care of a new baby. Friends on Stumble or Facebook or Twitter pass links about what they find funny, cool and useful. Co-workers load new musical finds to the shared iTunes on the office server.

As a persuader, it’s easy to think that once you receive those word-of-mouth referrals, these new prospects will sell themselves. That’s wishful thinking. Once you’ve received a referral, you still need strategies like strong headlines and effective hooks, to hold prospects’ attention for a few minutes while you start to create a relationship.

And you still need conversion. At some point, you need your new prospects to open their wallets and pull out their credit cards.

But that conversion doesn’t happen by sliding customers down a greased chute like a pig being rolled into the slaughterhouse. (If that’s your model, remember that Sweeney Todd’s return and referral business was pretty lousy.)

Create a conversation to convert prospects to sales

In the new model, conversion takes place within a conversation. You construct a thoughtful, convincing progression toward trust and acceptance. You establish yourself as a friend and an authority. You take the time to show exactly how your offering helps this new friend.

New forms like blogs, customer forums and email newsletters allow you to take conversations and multiply them for hundreds, thousands or potentially millions of customers. You tell your story over time. Your “brand” becomes a credible promise, not just a collection of colors and typefaces. And you develop the trust that advertisers could once buy with “As seen on TV.”

Every persuasive writing strategy you discover on Copyblogger will work better in the context of a meaningful conversation. Create conversations with prospects, then use your best persuasive techniques to inspire them to keep reading, to send your content to their friends, and eventually to buy your products and services.

Ironic, maybe, that the noisy, chaotic, cluttered Bladerunner world has given rise to this more intimate, more connected way for customers and businesses to work together. But there you have it. A future even Phillip K. Dick couldn’t have predicted.

About the Author: Get more online marketing advice from Sonia Simone by subscribing to her blog today.