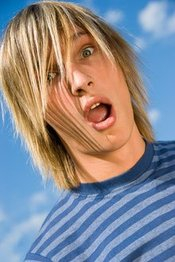 Testimonials add power to your copy. How? Let me answer that question by telling you a little story about a rabble of bladder-challenged teenagers whizzing in the bushes along an Interstate near my home.

Trust me. There’s a connection.

You see, some time ago, my wife and I were on our way to a party when traffic slowed to a standstill along a stretch of highway. Nine out of ten cars were filled with teenagers, so I quickly concluded that there was a concert at the nearby arena and that the ill-designed off ramp was clogged.

Fortunately, the wait paid off with unexpected entertainment.

A young man jumped from a car ahead of us and, in obvious physical distress, ran into the weeds to the right side of the road. Thirty seconds later he reappeared, smiling the smile of a man relieved of a great burden. He reentered his car to the approving whoops of a highwayful of instant fans.

A few moments later, a girl wearing one of those glorious “I’m doing something my parents don’t approve of” expressions followed the boy’s lead, plunging into the overgrowth, beer can still in hand.

Within seconds, two-dozen others ran staggering into the bushes. And when the available flora offered no more occupancy, the less shy simply turned their backs to the road and conducted their transactions under a bright Ohio sky.

Actually, I would have liked to use the facilities myself, but my wife’s disapproving look – not to mention the traumatic memory of insulting a nest of hornets the last time I improvised a rest stop – kept me in the car.

Most of those teenagers had been drinking. And I’m sure many of them needed to relieve themselves. But the idea of doing it in public didn’t strike them as acceptable until they saw someone else doing it. And the more who did it, the more acceptable it seemed.

It’s a natural human instinct to follow the behavior of others, whether it’s wearing the same type of boring gray suit as your associates or laughing at your boss’s lame jokes because everyone else around the water cooler is laughing.

Social proof is one of the most powerful psychological forces in our lives, and that definitely applies to copywriting. And what is the most popular – perhaps the most effective – social proof technique available to copywriters?

It’s our old friend, the testimonial.

The standard testimonial is a customer or client saying, “I’ve tried this and I love it.” The selling power delivers is enormous because its “social proof” works on so many levels:

You should always have a collection of good testimonials on hand to help sell your products and services. So in part 2 of this series, I’ll show you a simple method I developed for collecting testimonials. With this method, building your collection will be easier than you think.

Previous article: Can You Write an (Almost) Unbelievable Headline?
Next article: Warning: Narcissistic Marketing Can Be Dangerous to Your Business Health