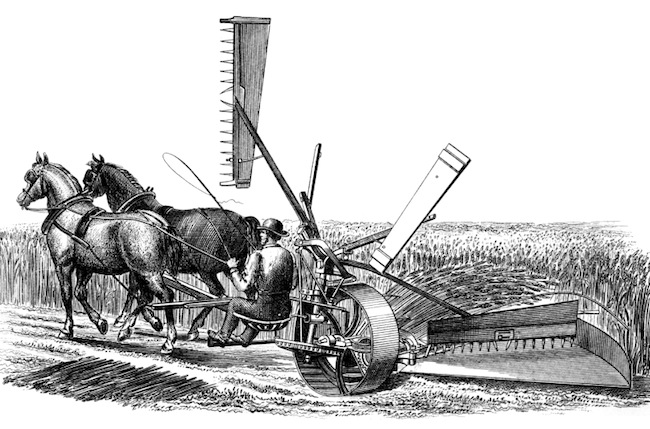 So, how’s the economic meltdown been treating you? Excited about the opportunities, or sick to your stomach worrying about how your bills will get paid?

Exhilarated or freaked out?

Maybe a little of both?

It’s impossible to really see massive change when we’re still in the middle of it. But there are a handful of things you can bank on. One of them is that human nature doesn’t fundamentally change, even though the environment can change radically.

And if you look back over most of the time we human beings have been on the planet, you realize that it’s in our nature to be entrepreneurs. In most times, most people created something valuable, then arranged to exchange that for something else.

The Industrial Revolution came along and we started to think it made sense for most people to work for somebody else. Just a few people knew how to do very complicated things like run factories. Most of us had to settle for being the faceless masses who could be trained to work in those factories.

The shake-up we’re in now could change our lives as profoundly as the Industrial Revolution did. Every week, thousands of employees are becoming entrepreneurs, whether they wanted to be or not. A job, once seen as a necessity, might be a pretty scarce resource for awhile.

So it might be time to think about the ancient traits that have helped entrepreneurs since the dawn of history, and how they relate to the emerging 21st-century economy.

Back when we moved from farms to factories (and later, to cubicles), once we got a few things like child labor and worker safety straightened out, a lot of us got into the habit of letting a company take care of us.

An 18th-century farmer and a prehistoric cave dweller had one thing in common: if they didn’t hustle their asses off, they starved. There was no benevolent employer who would make sure things turned out OK.

Often, things didn’t turn out OK at all. But you worked hard and you kept your eyes open and you made your own luck.

Today’s version of self-reliance is unimaginable luxury in comparison. You’re highly unlikely to get eaten by a saber-toothed tiger, if you get appendicitis it probably won’t kill you, and if you need to figure out how to do something, you can tap into the better part of human knowledge at any public library.

Enjoy the incredible benefits of the 21st century, but don’t lose that ancient human drive to make our own fates.

Being an entrepreneur isn’t (necessarily) about making physical things any more. The value you can create now comes from your own wisdom, perceptiveness, style, intelligence, flexibility, and creativity.

Even if you’re making an object, it’s the design and intelligence you put into that object that make it valuable, not the physical molecules.

In every market, you win by offering people what they want and need. The winners in the new marketplace will sell valuable and useful information, road maps, digital tools, education, and entertainment—often, all contained within one product.

These aren’t capital-intensive projects. They don’t require armies of workers to build physical infrastructure, or legions of slaves to dig plantations or build pyramids.

Every entrepreneur is the product of a specific cultural environment, and the environment we’re in now is information overload. The normal human brain was never meant to process this much data. Most people are completely overwhelmed by the endless tangle of information, and it just gets more complex every day.

As an information entrepreneur, you can navigate that roaring river and pluck out just what your customers need, then wrap it in the package that makes it exactly what they want.

Pay attention, keep learning, and keep evolving. Entrepreneurs have always prevailed by solving problems in smart new ways. There are more ways to do that today than there have ever been before.

3. The village is your customer

Once upon a time, the bread baker and his village were stuck with one another. If he baked lousy bread, he had to look his neighbors in the eye and face their scorn. The fact that his customers were his neighbors kept him on the straight and narrow. There was no difference between his professional reputation and his personal one.

Huge 20th-century industrialism made that seem irrelevant and quaint. We had no idea what kind of person made the toy or car or loaf of bread we just bought, and we forgot to even wonder.

Now the village is back. If we blow it, customers publicly rap on our window (with social media, blogs or Twitter) and give us a piece of their mind.

Once again, our reputation and our products are one and the same. What we create doesn’t have to be perfect, but it does have to show that we give a damn.

The inconvenient part is that the village isn’t stuck with you. If your baguette isn’t great, your customer can FedEx something from an artisanal bakery in Napa or Madison or Boca Raton.

The cool part, though, is that if you make something handmade (even if it’s delivered in pixels), personal, and/or magnificently useful, your village can and will find you. Whether you make homespun yarn or an interactive course on how to start a dog-walking business, your product can find its own profitable village of happy customers.

The human being is an inherently creative, flexible, resilient creature.

You are an inherently creative, flexible, resilient creature.

The times may well get worse before they get better. But compared with a lot of history’s darker moments, this one’s pretty comfortable.

And the opportunities that have opened up because of technology and communication are nothing short of breathtaking. No, not everyone’s going to become an information entrepreneur.

Embrace the entrepreneurship that’s in your DNA. Keep your eyes open for problems to solve and markets to serve. And buckle up. Like every exciting ride, this one’s got a few hairpin curves.

Previous article: How a Stay-at-Home Mom Built a Million-Dollar Business (from Her Living Room) through Passionate Online Marketing
Next article: How to Create an Influencer Plan that Drives Your Content Marketing