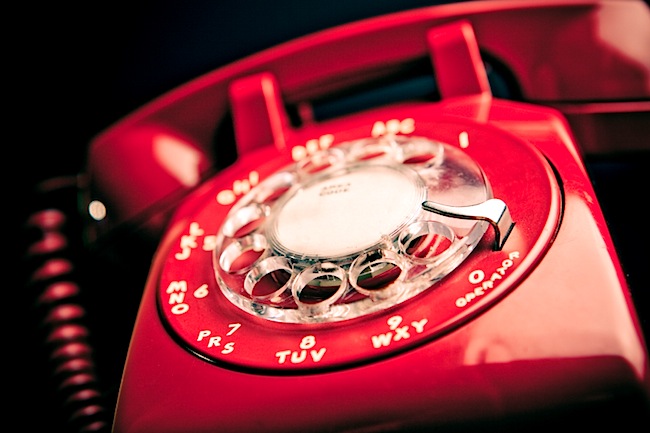 When we first launched the Content Marketing Institute (CMI) back in 2007, we had little more than two nickels to rub together. Today, the site averages 130,00 unique visitors per month, almost 300,000 page views, and more than 50,000 email newsletter subscribers (both daily and weekly).

In each category, this is double our performance from 2012, and almost all of our revenue at CMI, in one way or another, can be traced to one CMI blog post.

I share these results with you because I believe any company can reproduce the same kind of results by being eternally focused and diligently consistent with the creation and distribution of exceptional content.

Below you’ll find the case study of how we did it.

With minimal resources and budget, we looked at all available options for creating content. After looking at the competitive landscape and audience need (our audience consists of marketing managers and directors in mostly enterprise organizations), we believed there was an opportunity for daily instructional posts about the practice of content marketing.

We started with a budget of $6,000 per month to cover five posts per week. (We didn’t start weekend posting until 2012. Today, we publish once per day, seven days a week.) Those funds needed to cover raw content costs, editing costs, proofreading, uploading into WordPress, and any images for individual posts. It goes without saying, but this was not much to work with. Most of our competition has 10 to 50 times this amount of budget.

The only feasible way we thought we could make this work was to reach out to outside contributors, without paying them, in exchange for promoting them on our site.

Luckily, we had a head start with a defined influencer list.

We defined an influencer as a blogger, competitor, or media organization that was creating content of interest to our target audience. We actually rated our influencer list quarterly in something called the Top 42 Content Marketing Blogs.

Initially, this list was made up of influencers we found by tracking keywords (like “content marketing”) in Google Alerts, authors in industry trade publications, those who were talking about the topic on Twitter, and other bloggers that we just found interesting. Although the main list included 42 people, there was a secondary database of more than 300 people that we tracked in one way or another.

Getting the attention of influencers

As influencers, these people are fairly important.

They generally have real jobs, and are extremely active on social networks, spending their time sharing content and blogging. Getting on their radar is not easy. So, to get their attention, we gave away content gifts.

We did this in a few different ways …

Originally coined by Andrew Davis, author of Brandscaping, Social Media 4-1-1 is a sharing system that enables a company to get greater visibility with social influencers.

Here’s how it works. 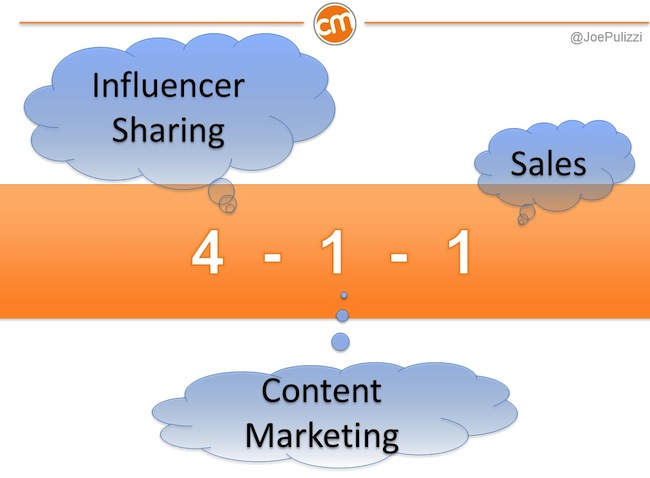 While the numbers don’t have to be exact, it’s the philosophy that makes this work. When you share influencer content, they notice. And you share, without asking for anything in return … so that when you do need something someday, the influencers are more likely to say yes.

As we tracked our “top content marketing blogger” list, we decided we could get better visibility with influencers by actually ranking the influencers and sharing it out with the masses.

This was an incredible success.

We hired an outside research expert to put together a methodology of how to rank the top bloggers, looking at areas like consistency, style, helpfulness, originality, and social sharing. Then each quarter, we would publicize the list, showcase the top 10, send out a press release, and try to make a big deal out of it.

Needless to say, the top 10 and the honored top 42 loved the list. (Copyblogger was a two-time winner.) Not only did most of this influencer group share the list with their audiences, approximately half of the top 42 influencers placed our widget (with their personal rank) on their home page, linking back to our site. So not only are we building long-term relationships with these influencers, we are getting credible links and traffic as well.

In addition to the top bloggers list, we started to put together large educational ebooks showcasing the influencers work.

For example, in 2009 and again in 2011, we launched the Content Marketing Playbook (the 2013 version is in production). The Playbook included over 50 case studies about content marketing, with many coming directly from our influencers. We made sure to note in the Playbook which examples came from which influencers.

When we released the Playbook and let the influencers know about the eBook, those we highlighted in the Playbook eagerly shared the content with their audiences.

Why was this important?

When we first started with this idea, CMI didn’t have a large audience, so we had to either pay for promotion of the eBook or get an incredible amount of social sharing. The influencer sharing is what made it possible for us to reach 50,000 downloads of the eBook in a fairly short time period.

The importance of a community blog

As we didn’t have the resources to pay for raw, educational content about content marketing, we knew exactly where we needed to turn … our influencers.

When we announced the original CMI blog, the first group we reached out to was our database of social influencers. Dozens of these influencers were more than happy to help us out, as we had promoted them for years, without ever asking for anything in return.

Michele Linn served as our content editor, organizing the editorial calendar and topics with each of the influencers. It was Michele’s job to heavily edit the influencer content we received. Yes, most of them were already pretty decent writers, but we wanted their content to really shine. Why? We believed that if we presented them as true rock stars on our site, with amazingly helpful content, the influencers would be more likely to share the content with their audience.

This was critical, because at the time we had very little reach and following online … we needed to leverage their networks in order for us to build our network.

CMI started to see positive traffic patterns almost immediately simply because of the amount of social sharing from the network.

That, in turn, led to more social sharing and some amazing SEO results. The CMI blog platform has enabled us to launch the largest content marketing event in the world, a magazine, two webinars per month, and every other revenue-generating activity we have.

How’s that for social media magic?

Editor’s Note: This post was adapted from Joe Pulizzi’s third book, Epic Content Marketing: How to Tell a Different Story, Break through the Clutter, and Win More Customers by Marketing Less, released this month.

Joe Pulizzi is an author, podcaster, marketing speaker, entrepreneur, father, and husband. Joe is the author of three Amazon #1 marketing category best-sellers, including Content Inc. Joe’s thriller, The Will to Die, is his debut novel.