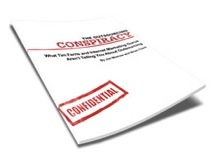 Editor’s Note: This report is no longer available, we’ll let you know if and when we update and republish it.

Have you ever noticed when a new free report is announced online, it’s often pitched as “controversial” and “likely to upset people,” but mostly, it’s not controversial at all?

I hope that’s the case here, but I have serious doubts.

As promised last week, today the free Outsourcing Conspiracy report is available. It’s written by Jon Morrow based on both his own experiences and his discussions with me about the 6 businesses I’ve started (5 successfully) over the last 10 years.

The goal of this report is not to attack anyone. It’s only designed to tell the truth, but you know how that goes.

So let me take a moment to go on the record about a couple of things. Jon’s not trying to piss anyone off, but without clarification, that might be what happens.

1. This is not an attack on freelancers.

Some of the most talented writers, designers, coders, etc. are freelancers. This report is not designed to diminish them or convince anyone not to use their services.

What this report aims to do is provide a counterpoint to a philosophy that says a business can be run continuously over the long-term with nothing but a single entrepreneur and a host of outsourced relationships. Can that work in some cases? Yes, but this philosophy is being pitched as if it’s the whole story, and the other side of the story is hugely important.

Which brings us to the second point.

2. This is not an attack on Tim Ferriss.

I know Tim and have had the pleasure of working with him in the past. He’s an exceptional human being, and I have no doubt the account of his personal experiences in The 4-Hour Work Week is nothing but the truth.

There are two issues that arise from that.

Number one, Tim is an exceptional human being who seems to work harder at his personal life than I work on my businesses. He also had a very nice cash flow when he “outsourced everything” (as he states in the book), which is not the case for many of you who are trying to do the entrepreneur thing.

Next, because Tim and his book are so exceptional, an entire subculture of Internet marketers is looking to cash in on Tim’s personal philosophy. Many of these people have never run a business (other than telling other people how to outsource everything as a “business”), and many do not have Tim’s high level of integrity.

What this adds up to is a huge movement that tells just one side of an important story, and ignores the other. That’s the conspiracy when it comes to outsourcing, and it’s dangerous.