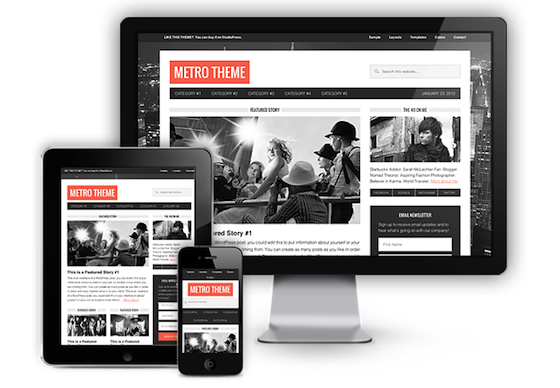 At the 1961 Masters Tournament, Arnold Palmer held a one stroke lead over Gary Player as he walked off the 18th tee.  On the trip up the fairway he allowed himself to talk to a friend who congratulated Palmer on his win.

Even though Palmer knew he needed to concentrate on finishing the hole, he couldn’t help but think about the green jacket that would soon be on his shoulders.

Palmer bogeyed the hole and lost the Masters by one stroke to Player.

Too often we know exactly the right path to take (and the right decisions to make), but fail to follow through for one reason or another.

What does this have to do with mobile responsive design?

Every day new studies and statistics are reporting …

For most of us, I think the message has been heard loud and clear.

Mobile is the future (and present)

Mobile is obviously a very big part of the present and future web, and if your business is not utilizing (or preparing to utilize) a mobile strategy that works, you can expect a swift demise into obscurity.

Developers, designers and content creators are realizing the power of a “mobile first” philosophy, and they’re finding enormous benefits coming their way …

My websites run faster developing Mobile First. I have recoded websites responsively and mobile first and have often times reduced my load time by 30-40%.

My clients understand content priority and visual hierarchy easier and better. They can all relate to the frustration of not getting the content they want on their mobile browsers and I can easily use this frustration to convince them to reconsider the desktop experience.

My wireframing has gone faster. Since the clients now know which information is more important to them and their users, I can take that and turn it into larger screen wireframe with them that they understand.

So if mobile is so important and intent on world domination, shouldn’t we be thinking differently how we build our websites and produce our content?

If the world is making this shift that favors mobile devices over desktop stations, it would make sense that we prioritize our efforts with the mobile audience in mind.

This was made abundantly clear to me after reading Luke Wroblewski’s book which is aptly titled, Mobile First.

The premise of Luke’s writing is that we should be thinking about the mobile user first, not only because we’ll reap the rewards of mobile growth today, but it will also prepare us for the explosive growth that is predicted in the future.

Additionally, adopting a mobile first philosophy will force us to focus and prioritize due to the constraints of mobile devices, and it will allow us to deliver innovative experiences using new capabilities available to mobile as they come online.

1. A mobile first philosophy taps into current growth and prepares you for the future

Wroblewski recently wrote up an astonishing comparison on his site.

On an average day (as of this writing), approximately 371,000 babies are born, while over half a million iOS devices are sold. And …

This brings the total of smartphones entering the World per day to about 1.45M devices, compared to 317,124 human births.

And that’s not all …

Other statistics in his book are even more convincing for developing a mobile first philosophy, because they show that not only are people buying mobile devices, but audiences are actually interacting with web sites through a mobile device.

People are not playing Angry Birds and using Facebook all the time.  They’re visiting content-rich websites.

Yelp is a very popular review service and if you would look at their traffic numbers you would see that only 7% of their total audience uses their mobile products.  Without any further investigation, you’d be tempted to scoff and declare that the time for mobile just isn’t here. But if you delve a little deeper, you find that that those 7% are responsible for 35% of their all of their searches across all of their products.

Another example given is that of the real estate service Zillow. Wroblewski points out that Zillow’s customers are viewing active real estate listings 45% more often from mobile devices, compared to their desktop site.

Now just so you don’t think that this philosophy is just for service related sites, one study revealed that the average smartphone user visits up to 25 websites a day and the the top 50% of those sites account for less than half of all mobile visits.

So, its very likely your site is part of this mobile growth phenomenon as well.

2. A mobile first philosophy forces you to focus on what’s important

Even though the mobile landscape has evolved immensely the past few years, the environment in which it exists still holds many constraints as to what’s possible in development and design.

But like any good creator will tell you, constraints foster creativity and problem solving.

In his book, Wroblewski identifies several constraints that are currently in place for mobile devices that can actually enhance a user’s mobile experience … including screen size and the performance of the mobile device.

The smaller screen sizes available to a mobile devices force designers to eliminate the irrelevant and unhelpful aspects of their design.

Too often, companies want to fill up every available pixel and ultimately end up with a cluttered site that’s hard to navigate and use.

But when developing for a mobile device, the loss of screen real estate forces the design and development teams to focus on what’s really important because there isn’t room for any element that has questionable value.

Wroblewski rightly points out that in order to run your business effectively you really need to understand your customers and your business. When you design for a mobile device first it forces you to get to that point.

As illustrated in the book Southwest Airlines is perfect example. On their full website they have a ton of advertisements, calls to action, and a number of links that the vast majority of users don’t need.

On their mobile app Southwest makes the decision to focus in on exactly what their customer’s need. They provide a clean and easy way to interact with the services they provide.

This laser-like focus keeps the user engaged, happy and coming back.

In addition to screen size, the performance of a user’s mobile network has a significant impact on how they interact with web sites. What this means is that anything that can be done to eliminate performance issues should be done.

Again, this forces the designer and developer to consider what their users really need. If large images and robust javascript libraries are taken out of the equation, we’re not forced to compromise, but to innovate and focus on what’s truly important.

3. Embracing a mobile first philosophy allows use of new capabilities

The natural constraints of mobile devices, networks, and usage patterns help focus and simplify mobile experiences. But designing for mobile isn’t just about embracing limitations — it’s also about extending what you can do.

People use their mobile devices everywhere. Because of that, new opportunities are available to meet the needs of users.

A prime example is location detection. A mobile device can more accurately pinpoint a user’s exact location than a desktop computer, and can be used to deliver relevant information about their specific location or surroundings.

Just the other day I wanted to rent a game from Redbox but didn’t want to drive around to each location to find out where it was.  Using their mobile website, Redbox quickly pinpointed my location and gave me a list of the closest kiosks that had the game I wanted to rent.

Rather than giving me a list of all the places in the greater area that I had to mine for data, Redbox using a mobile first philosophy did the work for me, based on location data it acquired.

Along with using new capabilities available today, a mobile first philosophy allows you to position yourself to be on the cutting edge of upcoming trends that will be used in mobile devices, like NFC, intelligent awareness, and whatever other new tools coming down the road that haven’t even been dreamed up yet.

So where do we go from here?

Then, start to think creatively about how you can implement a mobile strategy with your content. Of course, a smart and simple way to lay down a firm mobile foundation for your site and business is by using one of our many mobile responsive Genesis child themes.

Don’t rest on past success, ignoring the reality of the present and future.

If you’re not embracing a mobile first philosophy with your content online, you’re already being left behind …

Josh Byers is a media specialist for Copyblogger Media. He's a husband, father, follower of Jesus, and Broncos fan. A good day is filled with Coke Zero, the NBA, potatoes, Mario, serial tv, books, and too many Apple products. Get more from Josh on Twitter and Google+.

Previous article: Two Words That Will Make You a Smarter Content Marketer
Next article: The Amazing Copywriting Machine