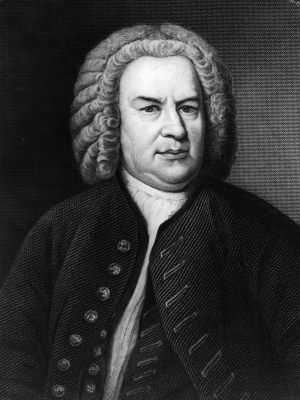 In the UK, we have a derogatory term for newspapers: chip wrappers. No matter how good, today’s front page wraps tomorrow’s fish and chips.

Bloggers can relate. You slave for hours to write a stellar article that bursts into the limelight for only a few days, or even hours, before it’s forgotten. Readers who find you this week won’t know what you wrote last week, much less last year.

It’s tough to feel like even your best work is destined to become nothing but a chip wrapper.

You may find yourself longing for the good old days when artists had plenty of time to produce their masterpieces, and audiences took their time to appreciate them. Write a good symphony, novel, or sonnet sequence and you could dine out on it for years to come. If only the modern world weren’t in such a perpetual hurry, chasing after the next quick fix.

Tell that to Johann Sebastian Bach.

To us, Bach is one of the giants of classical music, having produced a body of stellar work that his fans never tire of listening to. His music has been performed and recorded countless times.

So it’s easy to imagine him taking his time to compose, treating his art with the leisurely respect it deserved. And when he was done, he must have had plenty of opportunities to bask in the admiration of his fans, as they implored “Play it again Johann!”

The reality was a little different.

The present day interest of audiences in “old” music is a comparatively new phenomenon. Throughout the 17th and 18th centuries, audiences were interested only in new music and kept composers busy producing new pieces for their next performance.

~ Robert Weisberg, Creativity: Beyond the Myth of Genius

Bach spent his career as an employee, composing music to order on a punishing schedule. One such appointment was as Cantor of St Thomas’s Church in Leipzig, a prestigious but demanding role, where he produced a cantata (a musical setting for sacred texts) every week of the year and extra ones for holidays — a total of 60 every year. He held that position for five years.

Bach spent several decades writing an average of 20 pages of finished music a day. Tyler Cowen points out that it would be hard for an experienced copyist to match this rate of production. In other words, it would be difficult to just copy out that much sheet music accurately, never mind composing it.

Yet far from being a hindrance to the great composer, this kind of productivity was actually an advantage. In Creativity: Beyond the Myth of Genius, Robert Weisberg discusses statistical research into the proportion of masterpieces to minor works among great and not-so-great composers.

The researchers concluded that the rate of hits to misses was pretty constant between major and minor composers. The truly great composers produce more masterpieces than the others, mainly because they produced more work overall.

What distinguished them was not effortless genius or leisurely perfectionism, but relentless productivity.

Bach wrote more than 1,000 musical works in his lifetime. We don’t accord them all the same reverence, but we should be grateful for every single one he wrote — because if he had cranked out fewer journeyman pieces, we’d have fewer masterpieces to enjoy.

We also wouldn’t have a handy role model from whom to garner some essential tips for producing masterpieces.

Here are seven lessons you can learn from Bach, to keep your content marketing from being tossed aside like used chip wrappers.

Bach was a hired musician, but he approached his work as an artist. He knew that the best job security — and chance of immortality — came from having the highest standards.

Write articles, not blog posts. Never think “Well, I’ve been serving up good stuff for a couple of years now, surely my audience will cut me some slack this week.”

Write the very best you can, every time.

2. Get into productive habits

20 pages of music a day didn’t write itself. Bach didn’t have the benefit of systems like Getting Things Done and fancy tools like 37 Signals or Remember the Milk. But he obviously had a powerhouse approach to productivity.

Writing consistently well requires quality writing time. Make sure you’re spending the most productive time of your day on your writing.

That means getting into a daily and weekly routine that supports this. It also means having productivity systems in place that take care of all the day-to-day tasks, so that it’s easy to forget them during your writing time, and focus 100% on your work.

Bach wasn’t an entrepreneur or a business owner, but he was very focused on achieving his career goals, financial as well as artistic. He wrote with his patrons and his reputation in mind, just as much as the listeners in the church pews. He knew where he was headed — and what he needed to do to get there.

When every article you write fits into the big picture of what your blog is about, and takes you one step nearer your long-term goals, then it’s easier to accept that that particular article won’t be in the limelight for long.

This means taking time out to (re-)evaluate the strategic direction of your business, and making sure everything you write for your blog is aligned with that.

The St Matthew Passion and Brandenburg Concertos are the ultimate cornerstone content. Bach wrote to a weekly schedule — but with his eye on immortality.

There’s a (brief) time and a place for newsy, topical pieces, but if that’s all you’re writing, you’re producing nothing but digital chip wrappers.

Write articles that will be valuable, searchable and relevant five or even ten years from now. That way your blog will continually grow in value over time. It also makes your job as a writer easier, since you can keep linking back to earlier pieces and reintroducing them to your readers.

Musicologist Norman Carrell has conducted a painstaking analysis of Bach’s compositions, and concluded that more than 200 of his non-vocal works contain borrowings from his own earlier works; and 65% of his cantatas contain similar borrowings from his earlier choral works.

Clearly, he didn’t mind repeating himself — with variation.

Make a virtue of the fact that not everyone in your audience has read everything you’ve ever written. After you’ve been blogging for a while, look back at your archives and ask yourself what themes are right for revisiting.

Chances are your thinking will have changed a little since you wrote those early pieces. You won’t be regurgitating, but revising and extending your ideas. You can also link to those posts, which will both boost your traffic and give your new readers a chance to enjoy your previous work.

6. Riff on other people’s themes

Carrell’s analysis found borrowings from other composers in 80 of Bach’s nonvocal works, and melodies from Lutheran hymns in more than 200 of his cantatas.

This would certainly not have been considered plagiarism, since it was accepted practice for composers to compose variations on themes from past and present composers.

Blogging thrives on cross-linking and cross-fertilization of ideas. It’s one big conversation, right? Other bloggers love it if you pick up one of their themes and riff on it, offering complementary thoughts that extend them in a new direction. You’ll also get the side benefit of seeing other people link to your own best blog posts.

Make your feed reader your Muse from time to time. Just don’t forget to link!

When he sat down with his quill and paper, Bach could never have dreamed of lavish CD box sets stacked up in music stores, or of people downloading his sonatas from iTunes and listening to them on their morning commute.

A great way to repurpose your content within your blog is to create cornerstone pages. But don’t stop there — blog articles can become the basis of e-books, books, videos, podcasts, live seminars and e-learning programs.

I’ve lost count of the number of people who have paid me good money to tell them things in person that are available for free on my blog. Each time you change the format of your ideas, you make them fresh and relevant for a new audience.

Remember why you’re doing this

The historical record shows that Bach was very focused on earning money and building his reputation.

But I defy anyone to listen to his work and tell me that he didn’t love music for its own sake, or that once he sat down to write and got into the flow, he wasn’t transported into another dimension.

Goals are important, but set them aside for a moment. Forget about “why you’re blogging” in terms of outcomes, and focus on why you chose blogging writing as a means to achieve your goals.

Surely it was because you love to write, and the idea of writing for a living is a dream come true? Well if that’s the case, remember how lucky you are to have this opportunity to do what you love, today.

Make the most of it.