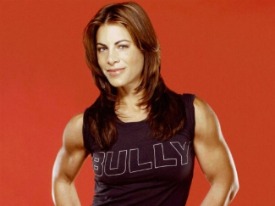 Last night I tuned in for one of my favorite guilty pleasures — watching The Biggest Loser on NBC.

The episode featured celebrity trainer Jillian Michaels being hurled off of the Auckland Sky Tower, the highest structure in the Southern Hemisphere.

(OK, she had a sort of bungee cord apparatus that kept her from falling to her doom. But you know there were still some cheers).

Michaels is one of those people you either love or loathe. She screams at the contestants. She’s snotty. She calls her workouts “beatings.” Professional trainers cringe at her technique.

She’s also widely adored and credited with inspiring thousands — maybe hundreds of thousands — of people to lose weight. And those contestants she screams at all seem to genuinely love her.

So is she a role model for how we can lead and inspire our audiences? Or an abusive train wreck we should do anything to avoid?

Some people truly want a boot in the backside

We have a character inside the Third Tribe who’s got a big personality. He expresses himself strongly, he’s not real big on self-doubt, and he likes to throw down challenges. He’s got a huge heart, but he’s not exactly soft-spoken.

Some Tribers absolutely love his message. He tells them to quit making excuses — to get off their lazy backsides and get to work. And they feel inspired and energized.

Others just want to smack him. My guess is they’re the types who kick themselves enough without any help from anyone else. They find him demotivating, depressing, or just plain annoying.

Some people want empathy and support

He’s extremely effective at helping people overcome their fears, deal with self-limitations, and move forward at their own pace.

Those who prefer the boot-in-the-pants method may not even hear my soft-spoken friend. He’s not the right advisor for them.

But quieter souls are glad he’s there, and they get a lot of value out of his approach. They can follow his advice and benefit from it, where the boot-camp style just leaves them cold.

So which one is the real leader?

You probably have a strong answer — the answer that works for your personality.

You might think our big-voiced friend has the right stuff. That he’s not afraid to tell it like it is. That he gets results.

You might think his soft-spoken business partner would be great at helping people find answers within themselves. That he helps his own tribe find confidence by showing them just how much a shy guy can accomplish.

And in both cases, you’d be right.

I’d last about 10 minutes working out with Jillian Michaels before clubbing her in the head with a barbell. But thousands of people would do anything to train with her.

It’s got to come from you

Putting on someone else’s leadership style will only make you look like a fool.

Can you imagine anything less effective than Gary Vaynerchuk trying to imitate Seth Godin?

How about Robert Scoble trying to be Arianna Huffington?

Notice that in each of these cases, the reverse is just as ridiculous.

If you’re going to lead your audience (and if you’re running a business online, that should be your goal), you’ve got to start with your own gifts. You can’t put on someone else’s leadership style like some weird costume.

But there’s more to it than just “being yourself”

Every social media pundit tells you to be authentic, to be transparent, to be yourself.

That’s important. But it’s not the whole game.

I’d like to invite you to join us for a new series of webinars and articles on what we call the Authority Rules.

We talk about where leadership really comes from … the elements that go into becoming the valued, trustworthy expert in your topic.

And it all kicks off with a special report by Brian Clark outlining The 10 Rock-Solid Elements of Effective Online Marketing.

If you want to lead your market, if you want to win the game of online marketing, you need to know that Authority Rules.

Those who cultivate true authority will thrive. Find out how to get it here.

About the Author: Sonia Simone is co-founder and CMO of Copyblogger Media. Share your leadership style with Sonia on twitter.