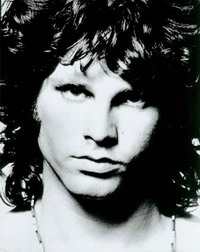 In 1966, The Doors were trying to make it to the pinnacle of the Los Angeles music scene by scoring a regular gig at the Whisky a Go Go in West Hollywood. At the time, playing the Whisky was the LA way to land a record contract.

But you didn’t just waltz in and play the Whisky. You had to work your way up to it.

In the short film The Doors in LA, guitarist Robbie Krieger tells how Morrison and the band landed a regular gig at the London Fog. The Fog was lower on the nightclub food chain, but strategically close to the Whisky on Sunset.

Krieger says they convinced friends from UCLA and throughout the LA underground music scene to come to the audition show at the London Fog. Naturally, it was important to show management that The Doors could pull a crowd.

Turns out, all these friends did show up. The place was packed, the crowd was knocking back drinks left and right, and the show was a raucous success. Needless to say, The Doors got the gig as the house band for the London Fog.

But there was one problem.

The next show, the place was empty. After all, it’s a bit hard to convince your friends to come to every show, especially when they can hang with the band in less formal settings.

Luckily, the London Fog management was patient, and The Doors did pull in crowds night after night once word got around. And they eventually made the move to the Whisky, where the band landed a record deal just 3 days before being fired for performing an Oedipal tale called The End.

Jim Morrison and The Doors have hugely influenced fans and musicians alike over the last 40 years. They’ve sold over 76 million albums worldwide, and continue to move over 1 million albums a year. But they still needed a little help from their friends to get rolling.

So, let’s step back and think about this in the context of social media.

About the Author: Brian Clark is the founding editor of Copyblogger, and co-founder of Teaching Sells.

Previous article: What Does Creativity Mean to You?
Next article: Goodbye Everybody, I’ve Got to Go…