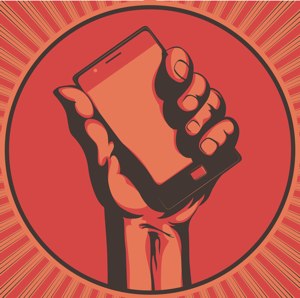 The history of the internet has not been a particularly polite one.

Human nature seems to amplify itself when we get online. Our generosity comes to the forefront, but so do our petty differences and our blind spots.

And it seems to me (do you agree?) that the upcoming election in the U.S. is bringing an unusual amount of spite, venom, and rage to the forefront.

It’s ugly out there.

We can say “that’s just the way it is,” and “the internet is a sewer.”

But as online publishers, we are the internet.

Content creators are the ones who build the memes, who write the must-read posts, who script the viral videos.

I believe this passionately: We can make a difference, if we do it together.

If you write and publish regularly on the web, you’re an influencer — whether you have 100 readers or a million. And I’d like to call on all of us to work together and return some civility to the web.

Without civility, the promise of this historic cultural evolution — the global community that has been created by the internet — can never be achieved. Without some basic ground rules for treating one another decently, we become a culture of anonymous creeps and soulless bullies.

As a community of content creators — people who have the courage to build, and not just tear down — I believe we have the resources, the intelligence, and the social capital to create a movement.

So here’s my first draft of a “Civility Manifesto.” I certainly don’t mean this as a final word. And I’d love to hear in the comments about the changes, additions, and alterations you would suggest.

Here’s my shot at a starting point — a few calls to action that I think would help make our global online community a better place to live and work:

Call to Action #1: Recognize our diversity as our strength

As citizens of the worldwide web, we are the most pluralistic society that has ever been seen on this planet.

We come from everywhere. We speak every language. We represent every shade of skin tone. Every religion, or lack thereof. Every political belief.

We have different abilities, different strengths, and very different points of view.

Our citizenry transcends any artificial boundary. This is no utopian (or dystopian) fantasy — this is the reality of the 21st century. Citizens of the web do not need to fear our differences. They have always been our greatest strength.

Call to Action #2: Demeaning labels have no place in our conversations

A political critic used a poorly chosen (but apparently quite intentional, as she repeated it the next day) slur in a tweet the other night about the U.S. presidential debate.

(By the way, I’d be saying the same thing if the slur was directed at the other candidate. Demeaning speech isn’t ok for liberals or conservatives or greens or libertarians. I don’t care who you are — it’s unacceptable in civilized conversation.)

Rather than link to the slur, I’d like to point you to the wise, gracious response from John Franklin Stephens. Stephens’ response is a lesson in the kind of calm, clear-sighted wisdom that I can only hope someday to attain. 🙂

He is respectful. He is compassionate. But he also speaks up for himself and his community.

(Incidentally? His polite, well-written letter is going viral like crazy. Everyone who sees it wants to share it. He’s gathering a ton of attention for his organization, and translating that attention into support, by being thoughtful. Just in case you thought that couldn’t happen on the web.)

There’s not much we can do about random strangers. But we can watch our own content, and make sure that strong feelings, expressed in strong language, don’t degenerate into slurs.

We can also follow Stephens’ example and, without degenerating into our own name-calling, we can speak up when we see demeaning language.

Most of us avoid specific “don’t go there” language like racial or other slurs. That one’s easy.

But I think we could take it further. We could refuse to participate in the increasingly common acceptance of ugly, abusive, violent language in our everyday speech on the web.

Like telling someone to “die in a fire” because you think they should do something different for a living.

Or that they should be “punched in the face” because you didn’t like a graphic they posted to Facebook.

Or that they should be “gang raped” because you didn’t think their joke on Twitter was funny.

These are the same words bullies used to hound Australian TV presenter Charlotte Dawson into the hospital. And have spurred uncounted suicides and misery.

I believe the problem is, we spend so much time in the sewer of YouTube comments and Twitter trending-topic trolls that we get some of the slime on us … and it doesn’t come off easily.

The casual language of violence and abuse seems funny and edgy. But it’s still abusive even if you’re “just kidding.”

I’m no angel. I like a juicy insult as much as the next person. I say (more than) my share of snarky things.

Frankly, I think that’s a bad habit. One I intend to work on. Whether you do or not, it’s something I’ll put out there for your consideration.

The rise of online bullying and trolling frightens me. Not only because of the damage the bullies can do … but because of the sickening damage trolls do to themselves.

Trolls, often victims of bullying themselves, withdraw more and more tightly into their own dark world as they spread fear, hatred, and pain. They poison and infect their own psyches. And they recruit others to share in their misery.

Anyone who’s been online for any amount of time knows the old adage, “Do not feed the troll.”

What do trolls eat? Attention. And we give them exactly what they want, even if their behavior shocks us, even if we’re appalled.

When you see a troll (whether they’re attacking you or someone else), block and report them on the service you’re using. Take your attention away. Make the game not fun any more.

Don’t let yourself get pulled into watching the train wreck. That destructive, chaotic energy doesn’t build anything. It only destroys. Don’t feed it with your attention, and don’t pollute your own life with it. Block, report, ignore.

And if someone you know is being attacked by trolls or bullies, please don’t tell them to “grow a thicker skin.” Help them block and report the abusers, and give them whatever support you can to move on from this ugliness. Bullying kills. We all have a responsibility to take it seriously.

Call to Action #4: Look for connection

If you stop and think about it for a minute, you have a lot in common with just about anyone online who might seem like your “enemy.”

We are all sons and daughters. We all fear losing what we have. We all have secret dreams.

The person whose political beliefs you loathe wants the same thing you do — a better country for everyone to live in.

Trust me, I’ve been online since 1989. I know exactly how hard it is not to lose your mind when someone is wrong on the internet.

And they may, in fact, be wrong. But you’re also connected somehow. Try to remember that connection. It will help you be more compassionate (and incidentally, more convincing) in your response.

If you’re someone who curses, curse.

If you’re someone with a raw story, tell your story.

This is not about the Nice Police trying to water down who you are.

Your words don’t have to be pretty. This is a culture, a community, not a tea party. Be brave, be real, be stark. Be honest.

But please, while you tell your story, respect your own dignity and that of your fellow human beings. It matters more than you might think.

(And if the uglies are getting you down, re-watch “Thank You Hater!” That always cheers me up.)

Or maybe you have a different angle on some of these. Or you think some are going in the wrong direction. Or that some don’t go far enough.

I’d love to hear what would be in your manifesto. And, of course, I know you’ll express your magnificently diverse opinions with respect and thoughtfulness.

Previous article: Research Ain’t Easy (But it’s Necessary)
Next article: How to Write a High-Quality eBook in 30 Days