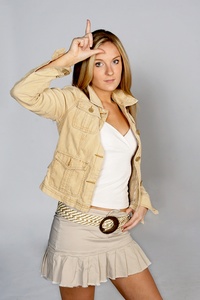 A couple of times now, I’ve been at dinner with a group of people, many of them substantially more financially successful and socially engaging than I, but as soon as everyone hears that I blog for a living, I’m suddenly Mr. Popular.

People seem enamored with the idea of sitting at a computer all day, pumping out pithy bits of wisdom for legions of adoring fans.

What’s more, they feel that it’s something they could never do, because, even though they’ve always wanted to start a blog, they kind of… well… “suk at writin’.”

The first few times this happened, I would just sit there with a smug little grin, offering polite lies like “Oh, it’s not really that hard,” but really thinking, “You’re right. You could never do what I do.” We all like to believe that we are one-of-a-kind rock stars of our craft, that we were born with some special talent that predestined us for greatness, that we’ve achieved some pinnacle of mastery at which the rest of the world can only gawk.

It’s a great feeling, especially when it means being fawned over at the dinner table. But is it really true?

Lately, I’ve been thinking about it. Despite the urgent shushing of my ego, I stopped to consider if it’s truly necessary to be a good writer in order to become a good blogger. Yes, many good writers are good bloggers, and vice versa, but is there a scientific correlation? Are the two skills locked in marriage for eternity?

As much as it pains me to say it, I think you can become a superstar blogger without being able to pass a fifth grade composition Class. In fact, why write at all? Blogs as a medium are no longer dependent on the written word. You can blog just as effectively with video, podcasts, or even little cartoons on the back of business cards.

1. Stop Trying to Do What You Can’t

Some people are born with a quill in their hand. Others learn to wield it effectively through a great deal of effort and refinement. Still others despise writing, but their teachers and parents nagged them often enough that they learned to write a coherent sentence, and although they’ll never be eloquent, they can get their ideas across.

But some people are hopeless. No matter how hard they try, no matter how much they want it, they’ll never write anything without sending their readers into a cloud of confusion. There are many people like this, and if you’re one of them, I can offer you this starting advice:

Attempting to do what you can’t will only frustrate you. I speak from experience. When I was a child, I wanted nothing more than to be the next Bruce Lee. I read every book I could find on every style of martial arts. I attended every school within a 50 mile radius. I went to expensive seminars from renowned fighters. I was bound and determined to be able to kick anyone’s ass.

But I was in a wheelchair. Worse, I had (and still have) a disease that caused me to become progressively weaker, eventually losing the use of my arms altogether. Pursuing martial arts was the sort of hopeful foolishness that only a child can muster, and it led me to oceans of frustration. No matter how hard I tried, no matter how much I wanted it, I would never become the next Bruce Lee.

Eventually, I wised up and put all of that energy into mastering the use of words instead, and after about 10 years of studying every aspect of writing and practicing it on a daily basis, I’m finally getting pretty good it. I still can’t kick your ass, but I can probably persuade someone to kick your ass for me. Not quite as satisfying, maybe, but it’ll do.

Writing is a means, not an end. You can get to the same end result through any medium. The end result I’m referring to is a superior experience.

Most people think the purpose of a blog post is to teach your audience how to do something. While people value content that leaves them with a lesson learned, it’s not usually what they came for in the first place.

No matter what anyone tells you, the reason people come to blogs is generally not to learn (outside of Copyblogger of course… but this isn’t a normal blog). They come for the same reason that they listen to the radio, go to art galleries, and watch movies: they want to escape.

The average person’s life pretty much sucks. Their work is stressful, their friends are stressful, and their home life is stressful. As such, they spend as much time as possible distracting themselves with experiences superior to their present reality. Checking out their favorite blogs is one way of doing that.

You thought blogs were something more noble? Well, maybe they are… to you. To the average person though, they’re simply something to do while they sip their coffee in the morning, unwind before going to bed, or take a break at work. If they didn’t read your blog, they would have to think about how crappy their life is, and that’s unacceptable. So, they turn to something more interesting: you.

Understand and accept this simple fact, and you’ll be ahead of 99% of other bloggers. In the beginning, you might find the perspective a little depressing, but in the end, it’s actually quite liberating. It means you don’t have to be a never-ending source of knowledge. It means you can be creative and have fun. And it means you sure as hell don’t have to write anything.

3. Choose the Medium Where You’re the Most Interesting

Here’s another distinction that’s taken me years to uncover: talent, as we normally define it, is highly overrated. Being interesting is far more important.

Yes, I like to think I’m a talented writer, but that’s not why I’m successful. There are thousands of writers infinitely more talented than I am who are laboring in obscurity. The reason I’m successful is that I’m more interesting than most of them. By studying copywriting, I’ve learned how to craft headlines, tell stories, and bring simple lessons to life in a way that makes people want to pay attention.

It’s also no coincidence that I write far more than I speak or do video presentations. I’ve experimented with them, and frankly, I find it harder to be interesting on a podcast or video than I do with the written word. One day, this may change, but I doubt other media will ever overcome writing for me. I’d guess I’ll always favor the written word.

So… what’s your medium of choice?

Look through the ways that you interact with people and figure out where you’re best at holding attention. Then, when you start a blog, figure out how to take advantage of that medium to make your content interesting for your audience.

It doesn’t matter if you can’t write. Really. If you’ve been worrying about your grammar, spelling, and obscure points, thinking that they’re holding you back from becoming a popular blogger, then use this post as permission to stop. The problem isn’t that you’re a bad writer; it’s that you’ve chosen the wrong medium.

Choose the right one, and you’ll become dramatically more interesting.

About the Author: Jon Morrow is Associate Editor of Copyblogger and co-founder of Partnering Profits.

Previous article: How to Build Your Blog Using Good Old-Fashioned E-mail
Next article: Want to Know the Real Reason Why You Write?