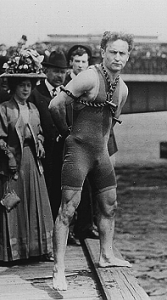 Have you ever planned what you thought would be a brilliant, jaw-dropping week on your blog?

You pour your heart and soul into an ingenious post (or series) then sit back and wait for the praises to come pouring in.

But instead, you hear from just your usual readers, commenting politely and moving on.

Where are the trumpets? The fireworks? The millions of raving reviews and incoming links?

I know how you feel. And so did the legendary magician and “escapist” Harry Houdini.

Houdini started his career working small sideshows and medicine shows. He would perform one airtight magic trick after another. And what was his audience’s reaction? They would clap politely then move on to the next performer.

Sound familiar? (This may be the part where you start banging your head against the desk.)

Houdini couldn’t understand it either, and considered retiring. Only after meeting showman Martin Beck did he learn the secret to captivating an audience. It is the big trick of showmanship. Are you ready for it?

Houdini learned how to create a build.

Once Houdini learned to build up his performances, he did it masterfully. No longer did he perform a long series of equally impressive tricks.

Instead, he developed one spectacular centerpiece, which mainly revolved around . . . waiting.

Houdini would have himself handcuffed, tied with ropes, locked in a box, and submerged in water.

When he finally made his great escape and emerged panting for breath, people couldn’t stop talking about it. Houdini became one of the most successful and famous performers of his or any other time.

Can you do what Houdini did? Of course you can. (Not the handcuff thing, the captivating-your-audience thing.) And the best part is, it will probably take less sweat and sinew than what you’re doing now.

Here are the five essential strategies for pulling it off.

Let me give you an example.

Let’s say I have two people I want to introduce you to. One is my old roommate from college. The other is my tall, beautiful friend who makes the best Danish pastries and tells the funniest stories about going to public spas in Finland.

Now. Who are you most interested in meeting? My roommate Libbie or my roommate Libbie? Yup. They’re the same person. But with the second intro I talked her up, which got you ready to admire her best qualities.

In copywriting terms, “talking it up” is about using specific detail, focusing on benefits to the reader, and articulating a big idea.

Have you ever watched the ocean? The way it sucks the tide back before a big wave bursts in?

Remember that rhythm and pull back a little before your next big post. Right before you launch your big event, let things go a little quieter and a little simpler.

A never-ending sequence of hype and fanfare will burn out your audience’s attention. (Think of some of the marketing gurus who never seem to let their “limited-time launch” actually end).

Creating a build for that big post or series means you don’t post every day at the same volume. You set off your bigger posts with some smaller (but still great) ones.

3. Revel in the anticipation

I blog about gifts. Last Father’s Day I decided to nearly kill myself crafting, cooking, and photographing every gift I could humanly manage.

Just like throwing a surprise party, I didn’t say a word until the big day. And everyone cared — a little. I got a nice link or two, but that was it. Once I recovered from the exhaustion, I committed to change.

No longer would I dream up a good idea, then keep it a secret from my readers until the day I shared the whole project on my blog.

For example, when I came up with my next big idea, the idea of testing the post office to see what they would mail in first class, I handled things differently.

I introduced the seedlings of the idea in a post. I brainstormed in another post. Only then did I start actually mailing things and blogging about it.

If you have a really big project (say, the launch of an extraordinary new online community), you might start the anticipation sequence weeks or even months in advance.

People like anticipation. Why do we watch thrillers? Why do we like planning for a vacation? Why do we wait expectantly while Paula Dean’s casserole bakes in the oven?

It’s because people like the build. The build is fun. Don’t leave out the build and spoil all the pleasure.

4. Have a signature thing

Take another lesson from Houdini and focus narrowly on what you do best.

Houdini wasn’t escaping a watery death chamber one week and cliff diving the next. No, he developed his unlock-himself-while-nearly-drowning thing and he stuck with it. Find out what people enjoy that you do, and do that.

Be distinctive. Great artists do it, accomplished actors do it, and so should you. Soon you’ll find other blogs know what to expect from you and give you credit for doing your thing better than anyone else. Readers will know you for it and happily point you to new ideas that you just might like.

5. Give your signature thing a name

Names are important. If people want to talk about your idea, they need it to have a handle.

Houdini billed himself as “The Handcuff King.”

I named my series about mail “13 Ounces or Less.” Clear, descriptive, repeatable, and easy to Google.

The simple act of giving an idea a name solidifies it in your readers’ brains and in search engine results.

Sound easy enough? Trust me, once you try it, you’ll get happy readers and bigger reactions, all with less work on your part.

AmberLee Fawson blogs about things like mailing a Frisbee with no envelope, doodling on a cake, printing on post it notes, and making hot chocolate on a stick.

Previous article: How I Became a Better Writer Thanks to Distracted, Hungover College Kids
Next article: The Secret Life of Testimonials