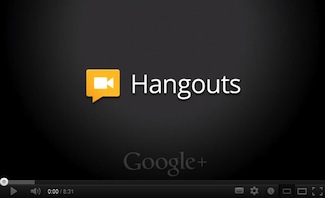 Gary Vaynerchuk has achieved notable success through content marketing, and he sometimes says the unbelievable.

His crime this time? In his new book Jab, Jab, Jab, Right Hook he argues that Google+ is worthless.

In Gary’s defense, I think he simply has not given Google+ a fair shake.

That’s a shame. And strange.

Gary, the man behind Wine Library TV, would surely rock Google+ — especially Hangouts — and have a lot to say about it.

Because Google has a lot to offer the modern-day content marketer.

The growing benefits of Google+

Google+ is one of the largest social networks on the planet.

It’s easier and faster to build an audience there than on any other social network. There are clear-cut SEO benefits. And Google baked perhaps the best video platform on the web right into it.

I’ve heard it said that communities thrive around relationships and activities. And the ability to build a thriving community couldn’t be more accessible than it is on Google+.

Canadian astronaut Chris Hadfield is a content marketing rock star. Italian Pio del Cin’s prolific interviews with the hottest people on Google+ is arguably one of the best things on Google+. And Chef Dennis Littley‘s stature as reigning food expert is a product of his cooking shows.

And don’t forget that it costs next to nothing to run Hangouts.

Fortunately, you don’t have to look far to find advice on hosting successful Hangouts. The conventional wisdom usually runs:

For those of us who have been around the block, we know that advice inside and out. How do we graduate to the next level?

Who wants to run a show that makes people take notice? And what’s the best way to accomplish that?

Lucky for you I have an answer. Six, in fact.

One way to take a load off the responsibility and fear that come with doing Hangouts (especially if you do them on a weekly basis) is to line up a panel of regular contributors who will show up each week ready to engage the speaker.

Because let’s admit it: It can be overwhelming, and you may be insecure about doing Hangouts.

For instance, you are doomed to run into technical roadblocks (your camera insists you remain upside down) or personnel hardships (guests don’t show up who say they will). Giving up is a constant temptation.

This is why David Oldenburg says, “I see more people fail in business, in blogging, and in social media because they simply want things to happen too fast.” He’d want everyone to know that they should never give up — in spite of the hardships.

That’s where a proper panel serves as a committee that encourages you when you might think things are not going well. Max Minzer uses this feature to full effect.

Each week Max interviews different people from the online marketing world — people like Eric Enge, Bill Slawski, Rae Hoffman, and Amber Osborne — but he’s built a reliable circle of people who show up each week to support him.

These are like-minded people who take the pressure off being a full-time host by encouraging Max (usually just by faithfully showing up every week). But they provide another service as well.

Max’s panel asks questions and interacts with the speaker, grabbing onto trains of thought that might otherwise go unnoticed or jumping in with questions and comments to elaborate on an issue.

Because we don’t like conflict, we so often conform to the party line and don’t rock the boat. But if you don’t have at least a little conflict, you probably won’t have a very good show.

So, how can you guarantee conflict? Invite someone with opinions different from yours.

In other words: the devil’s advocate.

This person could be a onetime guest or a regular member on your panel. For example, you could get a promise days before the event from someone on your panel who will promise to play the devil’s advocate. Then you can count on differing opinions to be introduced.

This devil’s advocate, however, needs to be prepared. Make sure he or she knows the guest and the guest’s positions well, to be able to bring up some meaningful differences.

And please, avoid ridiculing or embarrassing the guest.

3. Build your presence where it makes the most sense

While we wholeheartedly recommend Google+ as the dream social media space for a content marketer, we get it if you have a bigger fan base somewhere else, say on Facebook or Pinterest.

Treat Google+ Hangouts on Air like a 3rd-party video interaction tool and not necessarily a part of Google+/YouTube. Build presence where it makes the most sense for you and your audience — Facebook, Twitter, Blog, Google+, or elsewhere — and think about Hangouts on Air as just a tool to help you reach the right people.

This is good news for people who worry that their fans won’t follow them over to Google+.

If you have a huge following on Twitter and not Google+, allow people to ask you questions on Twitter. Don’t force them to use your Hangout Events page to comment and ask questions.

The same goes for Facebook. Minzer recommends to “create an event page or group on Facebook and have interaction there.”

4. Get training so the tools disappear

Speaking of tools, there is nothing more annoying than having a host who doesn’t know how to run a Hangout.

Such a host becomes a distraction when he or she can’t figure out how to screenshare during a Hangout, the audio drops, or the live broadcast is not properly shut down after the show is over.

This is why Google+ Hangouts trainer Ronnie Bincer encourages everyone to get trained.

5. Invite the audience to participate

Sarah Hill is probably the most famous and visible Hangouts person around.

She’s been a trailblazer since her days at Columbia KOMU, doing live Hangouts on Air with experts covering hot topics. (KOMU was the first to put a Hangout on TV, shortly after Google+ launched.)

She’s since taken that pioneer spirit to Veterans United, where she has run daily Front Porch Hangouts, inviting anyone and everyone to come talk to her about all things military.

What has her years of experience taught her?

Sarah says you should integrate “viewers outside the Hangout into the broadcast by mentioning their +1s, Retweets, Likes, and other social media comments or questions.” This is a practice Bincer advocates too.

The goal is to make those who are watching feel like they are intimate with the broadcast. The effect is a seamless conversation with the host, the panel, and the audience. This is truly nurturing the community, which Google+ is so good at.

There are apps available to make this process easy: Q & A or Comment Tracker.

One warning should be obvious, however: don’t do this at the expense of your guest.

Christine DeGraff, in the context of emphasizing that it’s essential you be interested in the person speaking, says this:

It is very easy to get distracted, to be checking the comment tracker, etc. I have done it myself and that is when I caught myself and realized that the person speaking deserves full attention from everyone on the panel. Put your cell phone down. Keep your hands off the keyboard. Listen carefully and give the person speaking the same attention as you would if they were in the same room with you.

6. Push Google+ to the limits

As Hangouts grow in popularity, so will the thirst for new experiences. So the template for what you can do with Hangouts needs to grow and change.

Otherwise, you’ll create just another interview or talk show … which isn’t going to cut it.

One way Sarah Hill is doing this with Veterans United is allowing people to go places they wouldn’t normally go, in this case immobile World War II veterans who’ve never been able to visit the war memorials. It’s truly inspirational.

Let me close with some inspirational words from David Oldenburg:

Everyone told me I would fail … I mean almost everyone. Listen and believe in yourself and you will succeed. It is amazing what we can accomplish when we stay the course and believe we can do it. When people give you negativity or cut you down in comments, simply thank them for their opinion, move on, and do not let it derail you.

Do the right things long enough and success will follow. So here’s to your successful Hangouts show in 2014!

And by the way, Copyblogger is going to launch our own regular Hangouts show next year. Look for Jerod, me, and Brian Clark, plus a slew of guests, delivering Hangouts covering content marketing and copywriting in the most creative ways possible.

Previous article: I Hated This Headline … So Why Did it Work?
Next article: How to Succeed Online (Even if You Aren’t a Rock Star)