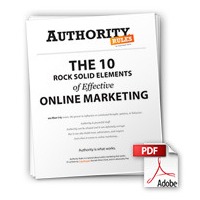 You may have heard us say before that to attract traffic, engage readers, and convert them to buyers, you need to become an authority in your topic.

But what does that really mean?

Does it mean you puff yourself up and pretend to know more than you do?

Does it mean you put other people in your niche down?

Or does it mean you bore your audience to tears with dry, flavorless facts?

For awhile, the conventional wisdom was that people (particularly young people) don’t care about authority any more.

The theory was that we were so burned out by scandals from traditional authority, and that these days we were only listening to what our friends recommended. We didn’t care about experts, we didn’t recognize authority, and we only trusted people we knew.

This was obvious nonsense to anyone who has ever studied the science of human behavior. We’re hard-wired to respect authority, no matter how much we might fight it at times. It’s part of our DNA, and nothing the 21st century throws at us is going to change that.

But who are we hard-wired to respect? An anonymous actor in a white coat who plays a doctor on TV? A charismatic televangelist we’ve never met?

Of course not. We’re hard-wired to respect and take direction from people we know, like, and trust who know more than we do about something we care about.

It may be the tribal shaman, or the wise woman who knows all about healing herbs, or the group’s most skillful hunter.

It’s not a stranger, and the authority comes from both the relationship with the tribe and being able to benefit that tribe in a meaningful way.

(Try bluffing your ice age buddies by puffing yourself up with false authority. You’d end up shipped out of town on the next ice floe.)

We think this topic is so important that we want to talk a lot more about it. More specifically, we want to give you a bunch of high-quality free content on authority.

Starting with an updated version of Brian Clark’s classic report Authority Rules, which spells out the 10 elements you need to build real authority (not a fake swagger) in your business.

And expanded with a series of three in-depth webinars on the essential tactics and strategies that build your authority in the right way — that make you the “likable expert” that customers, clients and Google love.

I’ll also send you additional articles that won’t be published elsewhere, about things like the 6 critical elements that will grow your business, how to look like a pro even when your business is tiny, and how to approach those “gurus” in your topic without feeling (or looking) like an idiot.

Where to grab all the free stuff

You’ll need to give us your email address so we can send you the report, the articles, and the call-in details for the webinars. Of course we won’t ever rent or share your information with anyone else for any reason.

About the Author: Sonia Simone is co-founder and CMO of Copyblogger Media. Share your own secret formulas with Sonia on twitter.

Previous article: 5 Things a Bad Dog Can Teach You About Writing Good Copy
Next article: How to Constantly Create Compelling Content