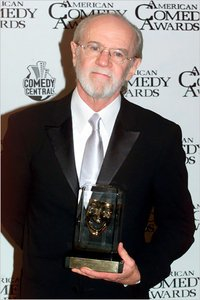 Whether you enjoyed his material or not, George Carlin was a gifted writer and performer with a particular talent for language. Not only in his wonderfully rhythmic word choice, but also in his ruthless linguistic dissection of the symbols we take so seriously without a second thought.

Eleven days ago, Psychology Today Senior Editor Jay Dixit interviewed Carlin by phone. Dixit went into great depth with Carlin, and the comedian himself called it “the most complete interview I’ve ever done.” It was also his final in-depth interview, as George Carlin passed away from heart failure June 22, 2008.

The whole interview is long, but great reading. Here are a few parts that stood out to me:

On Being a Writer

“I wanted to be distinguished from the ones who didn’t [write their own material], and I was proud of it, so I would say I am a comedian who writes his own material. And then at some point, I discovered what I really had become was a writer who performs his own material.”

On the Development of Ideas

On Finding a Unique Angle

“One of the voguish terms, which is so repellant to me, “thinking outside the box.” To settle for that kind of language is embarrassing. But that’s a very useful picture. I try to come in through the side door, the side window, to come in from a direction they’re not expecting, to see something in a different way.”

Check out the entire interview here. And so long, George… anyone who thought to ask if there was another word for “synonym” is all right with me.

About the Author: Brian Clark is the founding editor of Copyblogger, and co-founder of Teaching Sells and Lateral Action. Get more from Brian on Twitter.