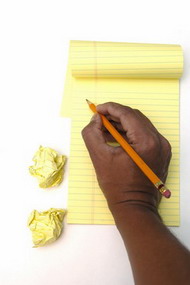 Editor’s Note: Last week, Muhammad Saleem submitted an article to Copyblogger on how to incorporate brevity into your writing. I decided to break up the article into two parts, and demonstrate that with the use of:

(1) a descriptive headline;
(2) a short anecdote,
(3) a famous quote from Strunk and White, and
(4) a link to another article about Steven King

you can communicate a salient point in only 59 words and still provide additional information via links.

What follows are Muhammad’s techniques and examples of how to say more with fewer words. Enjoy. – Brian

It’s harder to be brief than it is to go on at length when writing. We want our ideas fully communicated, so we keep going without editing for conciseness. But as Abraham Lincoln demonstrated with the Gettysburg Address, a tightly written text can often be much more profound than a much longer effort.

Is it worth the extra effort to ruthlessly edit? Well, if we take the time to omit needless words, sentences and paragraphs from an article or landing page, we communicate more concepts in less time and space. The point of brevity is not to say less, it’s to say what needs to be said effectively and concisely.

Here are two ways to do that:

The first method is to omit unnecessary words. The Elements of Style says that “the fact that,” “who is” and “which was” are the most commonly used needless words. For the former phrase you can often use a single word, and for the latter two simply omit them.

Before: Because of the fact that people benefited from reading my article, I decided to follow up with another.

After: Because people benefited from reading my article, I wrote a follow up.

Before: Brian, who is a writer and a consultant, is an interesting person.

After: Brian, a writer and consultant, is an interesting person.

Before: The article, which was written by Brian, was well received.

After: Brian’s article was well received.

You’ll notice in the last example that needless words were removed and the sentence was also restructured. That’s the second tactic.

Polonius told us that “brevity is the soul of wit” in Act 2, Scene 2, of Shakepeare’s Hamlet, but it took him seven lines of babble to do it. Shakespeare was being ironic, of course, but let’s see a demonstration of true brevity based on a description of Macbeth.

Before: Macbeth was very ambitious. This led him to wish to become king of Scotland. The witches told him that this wish of his would come true. The king of Scotland at this time was Duncan. Encouraged by his wife, Macbeth murdered Duncan. He was thus enabled to succeed Duncan as king (55 words).

After: Encouraged by his wife, Macbeth achieved his ambition and realized the prediction of the witches by murdering Duncan and succeeding him as king of Scotland (25 words).

By reordering and combining the main thoughts into one sentence, you convey the same information and cut the number of words in half. It takes more work, but it’s worth it if you value effective communication.

When you write this way, you can actually say more without dragging out the piece beyond the reader’s attention span. Be concise and your readers will thank you.

Get more social media analysis from Muhammad Saleem over at his blog.

Previous article: IKEA Content: How to Lose Your Readers in Two Minutes or Less
Next article: Conversations with Parrots and the Dangers of a Swipe File