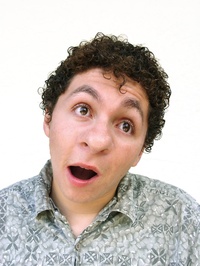 Imagine I was telling you the story of Goldilocks and The Three Bears.

Imagine I told you about Goldilocks, and how she found this house of the three bears. And how she ate their porridge. And how she sat in their chairs.

And… Are you getting impatient yet?

Because like most people, you’ve already heard the story many times before. And when you tell a story that your readers already know, your readers do two things in rapid sequence.

In short, you’ve insulted the intelligence of your reader.

So the question arises: How do you tell a well-known story without insulting the reader’s intelligence?

So let’s tweak the storyline. We can still have Goldilocks heading into the forest, but this time on a motorcycle. And she’s wearing a Hell’s Angels jacket.

That kind of changes things, eh?

Maybe the bears live in the wealthy side of town, where there are no break-ins. And Goldilocks breaks in anyway. Watches their Tivo. Eats their low-fat organic porridge. Re-sheets the beds with a lower thread count.

The story line stays the same, but the little tweak has sparked interest. This keeps the reader involved.

But hey, you may not want to do any tweaking. You may want to use the original Goldilocks story for the first fifty words of your article.

And you know that at least 80% of your audience knows the story. So that means 80% are tuning out, past the fourth or fifth line of your article.

So what do you do? You assume the reader knows the story, and then you frame your opening like this:

Remember that girl Goldilocks? And how she broke into the house of the Three Bears? And how she ate their porridge, sat in their chairs, and slept on their beds?

Well, that’s what Wall Street has done to the rest of the world. But they’ve gone much farther than Goldilocks…

You saw how we made the dramatic transition between Goldilocks and the financial crisis? And we did it without boring or insulting the intelligence of the reader. We kept the storyline intact, thus enhancing the ‘actual story’ you were going to write about anyway.

And this way, you’ve got your reader interested in your first fifty words, and you’ve got them slip-sliding into the rest of the article as well. Which is what you set out to do in the first place, didn’t you?

Question for Copyblogger readers: What are some of the other ways that writers insult the intelligence of their readers?

About the Author: Sean D’Souza offers a free report on ‘Why Headlines Fail’ when you subscribe to his Psychotactics Newsletter. Check out his blog, too.

Previous article: The “What Not to Wear” Guide to Breakthrough Blogging
Next article: Are You Blogging With Purpose? (If Not, 5 Ways to Fix That)