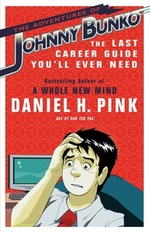 I’ve been a fan of Daniel Pink since the article “Free Agent Nation” appeared in the 12th issue of Fast Company in December of 1997. Somehow, we ended up chatting over email, which led to a meeting over steaming plates of migas at the Magnolia Café in Austin. Next thing you know, my story (at the time) is featured in Free Agent Nation, the book.

Next, Pink released the New York Times Bestseller A Whole New Mind, a book that heavily influenced me and my Lateral Action co-conspirators. Dan rightly identified creativity and innovation as the key to economic survival in the “Conceptual Age,” and set the stage for the shift in the types of people and thinking that lead to continued business success in mature economies.

But then he did something really interesting.

Dan released a career guide that reveals the six essential lessons for thriving in the world of work. Oddly enough, this celebrated bestselling author titled his new book The Adventures of Johnny Bunko.

Actually, the title isn’t that odd when you consider that Johnny Bunko is America’s first business book in the Japanese comic format known as manga. The odd thing is… it totally works.

Here are the six questions I asked Dan Pink about the persuasive storytelling possibilities of manga and the graphic novel format in general:

1. Tell us a bit about Johnny Bunko and what inspired you to do this project.

There were two inspirations for it.

First, over the last several years, I became extremely interested in manga — so much so that I went to Japan for a couple of months in 2007 to study the manga industry. There I discovered that manga played a very different role than comics played in the U.S. In Japan, comics are truly a mass medium — a bit like television. You can tell any kind of story, convey any kind of idea, advance any kind of argument using this powerful form. It seemed odd — to me, at least — that America’s view of what comics could do was so limited.

Second, I began to think about the role of books themselves in a world of Google. Take something like career information. *Tactical*career information — what keywords to put in a resume, what a company does, etc — is available online instantly and for free. It seemed ludicrous to memorialize that sort of information on the pages of a book and try to sell it. Books simply are no longer valuable ways to convey that sort of material. But that got me wondering what books can do that Google cannot. And I still think books are better at providing strategic, big picture information — especially in narrative form.

So combining these two ideas, in a fit of irrational exuberance, I decided to do America’s first business book in manga.

2. That’s the fascinating part… manga as a teaching and persuasion format. Will it catch on in the US beyond the Bunko?

I think it’s inevitable. It’s just a matter of when. What’s interesting, though, is how much this is taking off overseas, where there are legions of young people entering white-collar work for the first time. We did nearly as many foreign deals for BUNKO in the first two months as we did for A WHOLE NEW MIND in the first two years.

3. You’re a self-confessed “prose guy.” How hard was it for you to write Johnny Bunko?

It was challenging. Telling stories with pictures wasn’t at my fingertips. That’s why I was so lucky to have a collaborator like Rob Ten Pas, the insanely talented guy who did the art for the book. My tendency was to explain everything. But Rob showed me just how much narrative freight the pictures carry. As I moved along in the process, I found myself somewhat maniacally trying to cut as many words as I could to make the story move even faster.

4. When we first chatted about this project before Bunko came out, you touted the format as effective for persuasion. After reading it for myself, I agree. Why do you think that is?

Speed. Ezra Pound once said that great poetry achieved “maximum efficiency of expression.” I think that’s true of manga. It’s more than simply words adorned with pictures or pictures adorned with words. It’s an entirely different medium in which the words and images achieve something of a multiplier effect. And because it’s also a narrative, it has an incredible power both to absorb the reader and to make its message stick.

5. I just picked up the award-winning Watchmen graphic novel to become better acquainted with this form of storytelling. Any recommendations that helped you?

UNDERSTANDING COMICS by Scott McCloud is one of the best books I’ve ever read. For me, it demystified comics and — odd as it sounds — made them even more fascinating. From Japan, I love the KOSAKU SHIMA series as well as the amazing (and sometimes, amazingly weird) work of Osamu Tezuka. Among American and other non-Japanese graphic works I like are: FUN HOME, PYONGYANG, PERSEPOLIS, and, of course, MAUS.

I’m hard at work on a book about the science and economics of human motivation. I’m looking at why what we think motivates people is just plain wrong. And I’ll show, based on 30 years of amazing psychological research, how readers can unlock their own true inner motivation as a pathway to better performance.
___
Thanks to Dan for becoming Copyblogger’s first ever interview subject. I’ll hopefully be doing more of these, perhaps in a variety of media formats.

In the meantime… pick up Johnny Bunko. It may spark some great ideas for projects. Or, just buy it for your favorite confused, aimless soul stuck in a dead-end job as a holiday gift. It really is the last career guide anyone ever needs.

About the Author: Brian Clark is founding editor of Copyblogger, and co-founder of DIY Themes and Lateral Action. Get more from Brian on Twitter.

Previous article: Avoid Black-and-White Thinking to Win (Plus 3 Other Cool Resources)
Next article: Will You Be Seth Godin’s Apprentice?