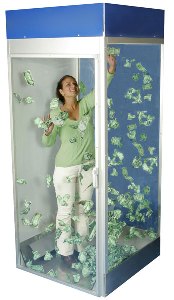 Have you ever been inside a money booth? People rent them for parties and events.

If not, let me describe it for you:

You’re in a clear glass booth and money is swirling in a breeze all around you. Bills are brushing your cheeks, your hair.

You want to get as much money as you can in the thirty seconds you’ve been given, so you grab for the fattest clumps.

But as you reach for them, they disperse. Twenty seconds left. You keep grabbing after new clumps and clusters, trying to make up for lost time. You lunge for a fat bundle with both hands … but it flutters away. Ten seconds. You grab again. Seven, six, five.

All too quickly your time runs out, leaving you empty-handed.

How can you beat the money booth? Go after individual bills. Methodically, systematically. One at a time. You’ll feel a stack amass in your hands, instead of ending up with a fistful of nothing.

Instead of painting a picture with individual details, we try to go for a “clump,” a generalization that can cover every reader, every scenario.

And we end up with nothing.

Chasing after a single bill or a single detail feels like forsaking the greater opportunity — like we’re settling for something smaller than we should. But actually, it’s the only way of coming out with a fistful of dollars.

Drilling down on a detail entails sacrifice. It means you won’t get the chance to say everything good there is to say about your beloved product, service, brand, company, niche topic, etc. At least not on that ad, page, or post.

So copywriters and content marketers refuse to make that sacrifice. They pull up to a 50,000-foot view so they can fit everyone in.

Their copy is filled with abstractions and generalizations, assuming readers will mentally fill in the specific from the general.

But the human brain doesn’t work that way

Tell me a Zappo’s-style story about an amazing support experience and I’ll conclude that you’ve made a commitment to superior service.

But tell me you have “great customer service” and I’ll conclude you’re full of it. You expect me to fill in the details about specific ways your service might manifest itself, but I won’t. I don’t have any details to “prove” your point to myself.

The specific can be imagined. It has dramatic power. Generalization just results in easily dismissed, flaccid copy, devoid of any emotional power or credibility.

Here’s another example of this same principle at work, as described by Jay Heinrichs (of Figaro Speech fame) in his book Thank You For Arguing:

Suppose you wanted me to be angry at my next door neighbor. You could tell me what a jerk she is — that she flirts in front of her husband and watches bad TV. None of this would make me angry at her. You described her personality, not her experience. To make me angry, give me a vivid description of a specific outrage.

You: She called the Boy Scouts a fascist organization.
Me: Well, she’s entitled to her —
You: On Halloween? When my little boy comes to her stoop wearing his older brother’s uniform?
Me: How do you —
You: I was there. When he started to cry, she said, “If you turn out to be gay, you’ll be glad you met me.” Then she looked straight at me and slammed the door.

That would make me angry at the neighbor. You re-created a dramatic scene, making me see it through your eyes. This works much better than name calling.

Tell us a story

See what I’m talking about? You have to be willing to tell one small sliver of your story powerfully, instead of trying to summarize the whole experience in the neutered grays of abstract generalizations.

This means you have to do two things:

For instance, I write radio ads for a builder of pole barns up in Ontario. His barns are markedly better built than his competitors because he refuses to cut corners and underbid jobs.

But any 30-second ad about generalized “build quality” in barns is likely to suck harder than a Dyson vacuum. I have to pick out one small detail about build quality and hammer it home through short-form drama.

For instance, I might dramatize how my client fired his old supplier of roof vents when they wouldn’t change their design to prevent leaks. My client then went out and had his own superior design manufactured for his exclusive use.

Of course, in telling this tale, I’d be as vivid as possible, making the mini-drama come to life inside the imaginations of my listeners.

I won’t ever have to say “committed to quality,” I’d get the listeners to make that conclusion for me.

And all because I put my faith in the vivid, dramatic power of specifics.

Keep In Touch with the People You Love

I helped script that video, and, in doing so, I had to make two choices:

These seem like straightforward decisions, but both of them involve sacrifices, and so most writers never make them.

In order to dramatize a specific narrative, I had to exclude other uses. The CEIVA frame most certainly is not limited to use as gifts from grown children to their parents. A “common sense” copywriter (or her client) would be worried about excluding the many customers who don’t fit this profile.

Have faith in your viewers to conclude the general from the specific, rather than the other way around.

And then there’s the red bicycle. The general idea I wanted to get across was “grandparents get to see their grandkids’ life in real time, which helps them have more meaningful conversations with them.” But that general description lacks any sort of emotional power. So I had to pick a specific instance of this — the boy’s new red bicycle — in order to dramatize it.

In the moment, it can seem like a hard choice. Narrowing down to a specific feels like a loss. But it’s never a loss. Instead, dramatizing a specific always equates to a gain in credibility and emotional power.

Moving this to the content marketing realm, instead of blogging about meta-topics or generalities, why not try doing a series of posts on highly specific aspects of your membership site, niche field, product, or service?

Instead of a white paper or special report that talks about general functionality, how about a set of three case studies that show what you do with specific detail?

Chances are, many of you have already tried this and gotten some great results. I’d love to hear about your experiences and tips in the comments …

Previous article: Copyblogger Weekly Wrap: Week of January 24, 2011
Next article: Dramatically Improve Your Site’s Speed, Stability, and SEO Without the Pain (or Cost) of Migrating