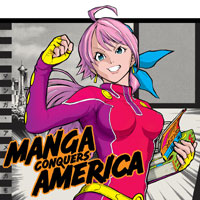 I have a confession.

Puns, turns of phrases, neologisms, Spoonerisms, etc… I love them all.

I just don’t use them in headlines.

Browsing through the latest issue of Wired (yes, the actual paper magazine!), I noticed the title of the feature article by Dan Pink on Manga, the Japanese illustration style for comics.

Now that’s a really clever title. The use of a homonym to make reference to the corporate dominance Japan enjoyed in the 1980s in the context of Manga made me smile. And I would expect no less from Mr. Pink.

But you wouldn’t want to use that as an attraction headline on the cover. And that’s why Wired didn’t.

Instead, they went with:

A nice descriptive headline in the “how” format gives the reader a sufficient promise of what’s to come (the Manga illustrated female didn’t hurt, either). It also provides the necessary context for more people to enjoy Pink’s clever article title.

Note: Dan Pink just emailed me to say he didn’t come up with the article title, a Wired editor did. So Dan gets no credit I guess. 🙂

It just shows you once again that Fight Club can teach you all you need to know about online marketing:

Tyler Durden: How’s that working out for you?

Tyler Durden: Keep it up then.

If your goal is to have a few readers who think you write clever headlines, keep it up then.

If your goal is to enlighten lots of people with what you have to say, be descriptive instead.

Previous article: Radiohead, The 4-Hour Work Week and the Importance of Raving Fans
Next article: Thanks Google!