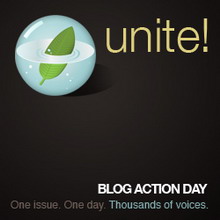 This post is my contribution to Blog Action Day, joining thousands of other bloggers to write about one topic for a single day. This year’s topic is the environment.

The acre of land my family and I live on rests on a heavily-wooded elevation, which provides a panoramic view of a sparkling lake to the south. It’s quite a departure from the suburban tract home I grew up in, and I’m hoping my kids end up with fond childhood memories of frolicking in a beautiful natural setting.

One remarkable thing about the property is the amount of butterflies it attracts, no doubt due to the variety of plant species that are permitted to grow undisturbed. My 5-year-old daughter and her little brother spend large chunks of time hopelessly chasing after scores of Monarchs and other brightly-colored, flitting butterflies.

And all I can think about is the havoc these little critters are having on the weather in China. Not the kids… the butterflies.

The Butterfly Effect is a term that has leaked into popular culture thanks to time-travel stories, but its actual meaning is steeped in no-nonsense science. From a technical standpoint, it refers to the sensitive dependence on initial conditions in chaos theory.

In plain language, tiny changes within a complex system lead to results that are impossible to predict. For example, the flapping of a butterfly’s wings could create tiny changes in the atmosphere that lead to violent weather conditions elsewhere on the planet.

Although the concept has been around since 1890, the Butterfly Effect gained popular acceptance in 1961 due to weather prediction modeling performed by meteorologist Edward Lorenz. He found that changes that should have been statistically insignificant led to completely different weather scenarios. The butterfly analogy began in 1972, when Lorenz delivered a speech entitled Predictability: Does the Flap of a Butterfly’s Wings in Brazil set off a Tornado in Texas?

What’s that got to do with the environment?

Well, given the changes we humans have introduced into the complex ecosystem known as Planet Earth, it’s fair to say that we’ve done the work of billions of butterflies. What we’re trying to figure out now is what’s going to happen, but it’s most likely going to be pretty significant.

What if Butterflies Disappeared?

While there’s little agreement as to what’s going to happen ecologically due to human activity, there’s no doubt that we’ve made drastic changes to just about every natural habitat on the planet. Our oceans and natural water sources are polluted, the composition of our soil has been chemically altered, the atmosphere has been heavily influenced by emissions, our forests have been dramatically reduced, and on and on.

One area of particular importance is biodiversity. Beyond the fact that biodiversity itself protects humans from the effects of agricultural catastrophes like the Irish Potato Famine, the loss of a species results in significant changes in natural habitats that can hurt us badly down the road.

Maybe you don’t personally care about the Mexican long-nosed bat, but if they disappear completely, there will most assuredly be consequences that ripple well beyond Texas and New Mexico over time. We just can’t predict what they’ll be.

If butterflies disappeared, the world would most certainly be worse off for children of all ages. But it’s much worse than that. Many flowering plants are so closely linked to butterflies (and vice versa) that one cannot survive without the other. When you think about the natural interdependence network that could collapse due to the extinction of one important species, it starts to get a little scary.

In the last 439 million years, there have been five cataclysmic extinction events, each one wiping out between 50 to 95 percent of existing life, including the dominant lifeforms of the time. Many scientists believe that:

Harvard biologist Edward O. Wilson predicts that if things don’t change, half of all plant and animal species will be extinct by the year 2100. Worse, a poll by the American Museum of Natural History finds that 7 in 10 biologists believe that mass extinction poses a much more dire threat to human existence than global warming does.

That’s not good news, but let’s step away from the negative. Instead, let’s look at how we can put the Butterfly Effect to work for us in a good way.

The Positive Side of the Butterfly Effect

Let’s face it—things will likely change for the worse regarding the environment no matter what. Some of those changes will be pretty bad, and there’s nothing we can do to stop it.

That doesn’t mean we should give up. The more positive change we introduce into the system starting right now, the more bad things we avoid. Plus, we buy time for technology to help protect us from adverse conditions, and even reverse some of the damage.

The corollary of the Butterfly Effect is that tiny changes you make do in fact make a difference. And when those tiny changes are aggregated among millions of people, we can truly make a real difference in how much nature we save for our children, grandchildren, and beyond.

It doesn’t need to be a sacrifice. Why not make changes that simply save you money?

Check out these planet-saving actions that keep more coin in your pocket:

Here are 52 other ways to save money while you save the planet.

What Have You Got to Lose?

It’s mid-October now, and the butterflies are just about gone for the year. My daughter provided the inspiration for this article when she asked me in a concerned voice:

“Daddy, where have all the butterflies gone?”

“It’s okay sweetie… they’ll be back in the spring.”

I hope no parent has to answer that question differently.