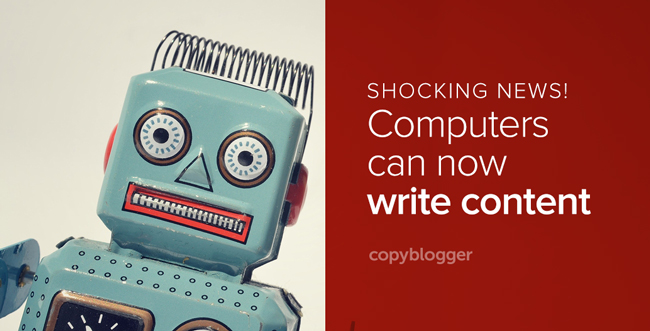 I don’t care how many times you read this opening paragraph. Study it word for word. Examine it frontwards and backwards. You won’t be able to conclusively tell whether it was written by a human or machine.

Don’t believe me? Read this sports story, and tell me if it was written by a human or machine:

Tuesday was a great day for W. Roberts, as the junior pitcher threw a perfect game to carry Virginia to a 2-0 victory over George Washington at Davenport Field.

Human or machine? Here’s the answer: It was written by a machine. (I wrote the opening paragraph.)

See, when it comes to a computer-generated story, there aren’t any telltale signs that it’s manufactured by a machine. That’s how good this machine-written content is getting.

Perhaps you have heard: machines are taking over the world. Not H.G. Wells-style, with fighting machines equipped with heat rays and “black smoke.” No, this invasion is more prosaic: machines are kicking us out of the cubicle.

In fact, according to a 2013 Oxford Martin School study, 47 percent of U.S. jobs are susceptible to machine automation. But this shouldn’t surprise us. Machines have been displacing us for more than a century.

The 21st century has ushered in an era where Natural Language Generation (NLG) machines are making headlines — and yes, that statement has a double meaning.

What is an NLG?

NLGs are machines that create content out of data. Here are two notable examples:

NLGs are also creating product reviews and economic studies. Machines might be behind the content in many places where you find a massive, complex, and confusing amount of data that needs to be parsed and published.

They are even producing content in a voice that resonates with the content’s specific audience.

Why you shouldn’t fear NLGs

“Insights from a curious and fertile mind” are missing from computer-generated content.

The upside here is crucial: Those who break news may get a few minutes of fame before their stories are recycled by other outlets, but those who produce original research and analysis have material that typically leads to greater recognition and is harder to rip off.

Furthermore, a machine can’t report on the aftermath of a devastating hurricane, interview eye witnesses or experts, or live blog a conference (which involves decisions about what is meaningful and what is not meaningful).

That takes brains on the ground.

One more thing: Machines can’t create a genre or writing style like gonzo journalism. They can only execute within a formula — a formula created by humans.

That is, they aren’t creative in the true sense of the word.

Which is where we need to focus.

As Brian Clark reported in his first episode of Unemployable, the cover of the June 2015 issue of the Harvard Business Review reads “Meet Your New Employee” above a picture of a robot.

That’s not meant to be an alarmist headline, even though it’s probably safe to assume many of us feel that machines are getting closer and closer to entering our line of work.

This only demands a response, that’s all.

The response in “Beyond Automation,” the HBR cover story by Thomas H. Davenport and Julia Kirby, comes in five flavors.

The first response from the authors reiterates the conventional answer whenever machines have encroached on human work: get more education.

This probably means an MBA or PhD. Or, if you are like most of us around here, simply bootstrap that higher education with books — MOOCs — or by joining a content marketing training and networking community like Authority.

More likely, all the above.

“There will always be jobs for people who are capable of more big-picture thinking and a higher level of abstraction than computers are,” Davenport and Kirby write.

In essence, have computers do the grunt work while you focus on strategy.

2. Put your strengths to work

Think about it. You can’t code a designer’s taste, a writer’s unique voice, or a podcaster’s superb interviewing skills. These are the strengths that make them masters of their disciplines and synonymous with the field.

More importantly, you can’t codify soft skills like empathy (that human touch), which is essential to excelling in just about any field of work. So bone up on your emotional and social intelligence.

3. Monitor and modify the work

On January 3, 2014, the city of Los Angeles woke up to a magnitude 3.0 earthquake. Within minutes, the story was scooped up and published online by Ken Schwencke. But the article was the work of a machine.

Ken is a programmer and journalist at the Los Angeles Times who created an algorithm to help him auto-report and publish stories about earthquakes.

In the content creation world, for example, you could use an NLG to create a rough draft, and then edit that draft into shape, adding your unique flair to the finished product.

The fourth piece of advice the authors give is to find a niche and burrow deep inside it.

The idea is to create “a name for yourself as the person who goes a mile deep on a subject an inch wide.”

This doesn’t mean you can’t have other interests. (In fact, it’s highly encouraged you do: only then can you enter strange dimensions.)

But what’s important is that you master a slice of a subject so thin that it just doesn’t make financial sense for anyone to automate that knowledge.

And soon enough, your name will become synonymous with that niche.

5. Develop the next set of displacement tools

This final piece of advice is simply to “step forward” — become the person who volunteers to create the next generation of the tools that displace certain types of work.

Someone has to build the next great automated insurance-underwriting solution. Someone intuits the human need for a better system; someone identifies the part of it that can be codified; someone writes the code; and someone designs the conditions under which it will be applied.

This could also be called the Copyblogger approach to business building. As an example, the Rainmaker Platform is the culmination of years of humans intuiting the need for a better system, identifying the parts that can be codified, writing the code, and then “designing the conditions under which it will be applied.”

And the tasks that have been displaced by the Rainmaker Platform (digital commerce setup, site maintenance, updates) give freelancers and entrepreneurs the freedom to focus on what truly makes them great and drill deep into their subjects, while still having a professional website (and plenty of money left in the bank account).

To adapt is to be human

Let me close with this: don’t panic.

Machines might take over every single dirty, dangerous, dull, and decision-making task in the world, but you can and will adapt.

That’s what makes you a human.

And it’s my hope that the five responses I shared in this article give you hope that not only will you survive the robot raid on human careers, but you will thrive.

The mystery behind this article’s headline

Most of us around here know (if not love) Dave Pell’s Next Draft email newsletter.

It’s a daily newsletter where Dave curates his 10 favorite news articles from that day. He visits 75 sites, plucks the 10 most fascinating articles, and then delivers them with a “pithy wit that will make your computer device vibrate with delight.”

Which makes his site tagline so appropriate: “I am the algorithm.”

It’s a slogan I unapologetically adopt as a digital content creator — one who researched no less than 28 different sources while writing this article, vetted the nonessential in favor of the meaningful, and wrote it with sarcasm no machine could match.

You, too, can be the algorithm. And together we can take over the world with clear, concise, and compelling content no computer could ever imitate. Who’s in?

Previous article: Vexed by Your Bankrupt Vocabulary? Listen to This
Next article: 6 Storytelling Lessons from a Famous Urban Legend