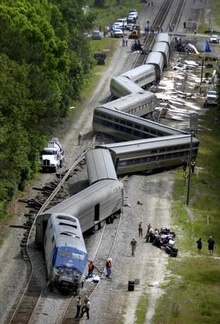 We don’t want to admit it. We’re not supposed to feel that way. But secretly buried, deep down inside, we all want a front row seat to the wipe out of the season.

It’s not that we want to see anyone get hurt. It’s not that we wish failure or disaster on anyone (let’s keep our in-laws and competitors out of this). We just want to know all the juicy details once it’s already gone down.

We even feel bad about this irrepressible urge…but we just gotta know!

And, understanding this impulse will let you tap a side of blogging that holds the potential to explode readership… if you have the will.

It’s a bummer we’re wired with a negativity bias.

Negativity bias is the name for a psychological phenomenon by which humans pay more attention to and give more weight to negative than positive experiences or other kinds of information.

This is why for decades, The National Enquirer has outsold every other hard-news daily newspaper by a mile. Have you seen their headlines?

And, it’s one of the reasons millions of personal journal-style blogs never get any traction, while a small handful of others take over the world.

What are the top personal blogs today?

And, when I say “personal” I’m talking about blogs that may masquerade as business, marketing or tech, but, hey, we all know why we really read them. Because these courageous bloggers are so wildly transparent about their personal lives on their blogs and they are real people, meaning their lives aren’t all pink and sugary-sweet.

They are human and their days often look like what Tevye in Fiddler On The Roof called life’s “full catastrophe.” Wild rides, out of control kids, parents, partners or lovers, crazy nights on the town, businesses going bust and boom, heart-wrenching stories or triumph, success and a stunning willingness to reveal the gloriously imperfect side of life.

We read about these people, these experiences, in large part because of the negativity bias.

They remind us we’re not alone.

They let us commiserate. We’re right there in front of the screen crying over our own lives with them. And they let us feel comfort when we realize that, at times, compared to them, things are pretty damn good.

To do it on a level that makes for kick-ass blogging requires:

But, here’s the thing. Because so few people are willing to be the Heather Armstrongs, Penelope Trunks or Naomi Dunfords of the blogging world, if you are willing to take the reins and reveal your humanity to the world, the competition for attention is vastly smaller.

There aren’t nearly as many full-catastrophe bloggers as there are advice bloggers. It requires better writing. And, done right, it’s far easier to shine.

Does this mean we should all run out and start pouring the intimate details of our personal lives into our blogs? No. Some people are comfortable with this approach, but most aren’t. I count myself in the camp of those who’d rather keep most of my personal life, well, personal.

Understanding the negativity bias can help build readership in other ways.

Most specifically, in crafting headlines that’ll get people to open, then read your posts.

Think about it, which post would you be more inclined to open?

We all know which one you’re clicking. You don’t have to feel bad about it, it’s just human nature. Guaranteed the open rate on the first post title would be way higher. The negativity bias is just that strong.

But, here’s the thing.

If you choose to build post titles that tap the negativity bias, a second job awaits.

Once your reader has clicked over to your post, you’ve got to:

These things take practice to do well. And I wouldn’t suggest making every post a graphic exposition on your daily personal angst or make every headline a train wreck.

But, I would suggest trying to have a little fun with your post headlines here and there. Mix in the occasional stunner. And, if you’re up to the challenge of head-on train-wreck blogging and you have some serious writing chops, have at it.

So, what do you think?

Have you experimented with this phenomenon before?

Jonathan Fields is the author of Uncertainty: Turning Fear and Doubt Into Fuel for Brilliance, he blogs at JonathanFields.com and runs the acclaimed Tribal Author Camp online book marketing training.

Previous article: Why Leo Babauta of Zen Habits Gave Me His Blog
Next article: How to Be a Good Host: A Quick Guide to Web Forums That Work