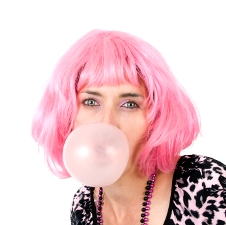 Every once in awhile, someone asks me why I have pink hair.

(You ever notice that no one asks why anyone has blonde hair, or red hair? But pink, it seems, requires a good reason.)

There are a lot of ways I could answer that question, but the simplest is probably that I don’t really buy into the standard set of rules about what “success” or “professionalism” look like.

As it turns out, there are a lot of things I don’t buy into.

I don’t buy into the idea that the best way for me to make a living is to work in a box from nine to five every day. Even a really nice box.

I notice that Brian didn’t buy the notion that being a lawyer (which he had put a lot of years and dollars into) was a wiser career choice than starting some blog about copywriting and social media.

And come to think of it, from hearing Darren Rowse’s story, I understand that his wife didn’t think that his notion to do that problogging stuff, whatever that was, would be anywhere near as logical as getting a nice steady job at a gas station.

If you spend enough time around entrepreneurs, you’ll quickly begin to realize that the vast majority are . . . (hm, searching for the polite word, here) eccentric in some way.

(OK, let’s tell the truth. A lot of us are basically nuts)

But even if you find one person who seems totally normal, you can bet that she made at least one giant, ridiculous decision in her past that seemed crazy at the time, but ended up getting her to the great place she is today.

I have pink hair because I like the way it looks, because it makes my kid smile, and because I happen to rather like tweaking ordinary expectations.

But here’s the important part: What I do with my hair doesn’t matter at all. But if I lived a mousy-brown life — where I did all the things we expect of a “normal” person — I wouldn’t be as successful or as happy as I am today.

The nonconformist thing is on my mind because I’ve been trading email lately with one of our regular writers, Johnny B. Truant. You might have seen that Johnny has partnered with filmmaker and Huffington Post writer Lee Stranahan to create a course called Question the Rules.

Their tagline is: The nonconformist’s punk rock, DIY, nuts-and-bolts guide to creating the business and life you really want, starting with what you already have.

Basically, if you’re starting your own business, you’re breaking a rule. (That’s true whether or not you keep your day job.)

Other people should be in charge of how much money I make, how hard I work, and what I should work on.

When I went out on my own, everyone praised me for being such a risk-taker. Including all the people who were out of a job after an ugly round of layoffs, and who were answering those monster.com ads with an increasing sense of desperation.

I had a different rule:

No one will ever care as much about my financial security, or will work as hard to improve it, as I do.

To me, it was risky to stay with that day job. But to a lot of my more “normal” colleagues, my decision made me look like a downright daredevil.

All entrepreneurs are punk rock

That’s how Johnny puts it, anyway. I just use the word “nuts.”

Entrepreneurs are nonconformists, whether we’ve realized it and embraced it or not. We challenge a lot of rules and norms that are very deeply engrained in this culture.

The problem is that a lot of people who decide to start their own business just know that “normal” isn’t working for them.

They know what they’re not, but not really what they are. They don’t really own their punk rock nature (quite possibly because they have no interest at all in dyeing their hair pink).

So they end up feeling like fish out of water.

Which is not, of course, a nice feeling at all.

I took a sneak peek at Johnny and Lee’s course, and it really speaks to those punk rock entrepreneurs, including the ones who live in lovely four-bedroom houses in the suburbs.

They talk about the stuff to actually do, the tactics. They talk about how to get our heads in the right place – the mindset. (Which is, in my experience, the part you really do need to get right.)

And then just for giggles, they throw in fifteen or so meaty interviews with rock-and-roll entrepreneurs who owe their success to questioning rules. Folks like Chris Guillebeau, Naomi Dunford, and Jason Freid from 37 Signals. Our own Jon Morrow has an amazing interview where he talks about the power of working with a gun to your head.

Oh, and some pink-haired chick from Copyblogger is in there, too.

Here’s the link to check out the course.

(And yep, that’s our affiliate link. We think Johnny and Lee did a great job with this one, and we’re proud to recommend it.)

The punch line is that the price is going to quadruple on Saturday.

So if you want to check it out, don’t dawdle. 🙂

Do you consider yourself a nonconformist? Do you think that it takes a certain measure of “punk rock” to get out on your own? And what does “punk” even mean for you?

Previous article: Creative Content Recycling: Are You Wasting Your Garbage?
Next article: The Two Vital Attributes of Quality Content