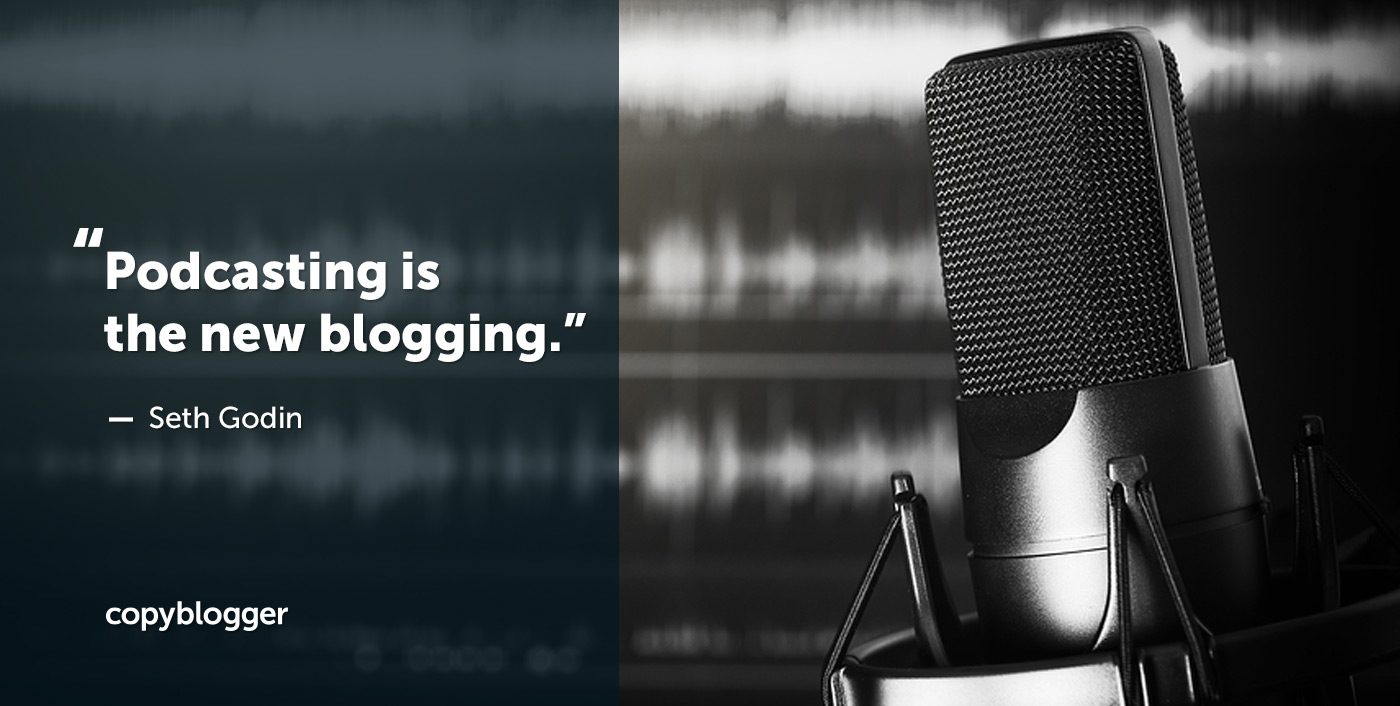 Odds are pretty good that you’ve listened to a podcast or two this week.

They’re even better that you’ve listened to a baker’s dozen or more this month.

It’s not just you; podcasting has finally crossed into the mainstream (especially here in the U.S.) and firmly planted a flag in our zeitgeist, delivering self-curated, on-demand, exclusive, spoken-word content in a far more intimate and less distracting manner than traditional media like TV and radio.

Listeners have more high-quality programs and formats to choose from than ever before, and they can dive deep into any niche topic they desire at the push of a “Subscribe” button.

If you’re a podcast junkie like me, you’ve got a number of podcasts queued up on any given week — everything from post-apocalyptic fiction, up-to-the-minute political reportage, self-publishing advice, an NPR show or five, and even an exploration of Hollywood’s forgotten history.

Are you still asking yourself if you should explore podcasting for your own story, business, or brand?

Or are you frozen in the “I’m too late to the party” line of thinking?

The podcast obsession we’re seeing right now is no surprise given the age-old power of storytelling and the ability of podcasts to get into an audience’s ears and stick with them.

Podcasts are even gaining traction as a viable alternative to the fear-mongering of traditional mainstream media, and neuroscience has recently shown that audio content carries a greater emotional impact over video.

“… Researchers interpret the higher level of emotional arousal as an indicator that the audio content requires active imagination on the part of the listener compared to an entirely passive viewer.” – Roger Dooley, Study: Winner Declared in Audio vs. Video for Emotion

Rebecca Mead for The New Yorker noted, “… we are living in a new golden age of [storytelling], in the form of the podcast: on-demand audio that a listener can download and play while commuting or exercising or, given the right equipment, showering.”

The medium demands little other than some headphones or a small speaker and can be devoured at any speed you like (listeners can opt to double or triple the playback speed for efficiency).

But is it a viable investment of your time and energy to get into the pod game now?

It’s a complex question, and may not be the right one to ask if you’re thinking about creating your own podcast, according to so many who produce them (myself included).

“Not as a way to make big dollars (blogging didn’t do that either). But as a way to share your ideas, to lead your community, to earn trust.

“Podcasting is a proven technology that is still in its infancy. It’s an open mic, a chance for people with something to say to find a few people (or perhaps more than a few people) who’d like to hear them say it.

“And podcasting is the generous act of showing up, earning trust and authority because you care enough to raise your hand and speak up.”
– Seth Godin

And although it’s not a new thing, nor a terribly novel one, podcasting has reached a critical mass of adoption that signals it’s here to stay for the long haul (despite the outdated nomenclature and that iPods have gone the way of the dodo).

“Among the U.S. population ages 12 and older, the total number of people who have ever listened to a podcast passes 50% for the first time.

“‘This is a watershed moment for podcasting — a true milestone. … The medium has firmly crossed into the mainstream,’ noted Tom Webster, Senior Vice President at Edison Research.

“One-third of the population reported having listened to a podcast in the last month, representing 90 million monthly listeners.” – The Infinite Dial 2019

If you’re thinking about diving in …

Here are some driving factors in this flash point in the history of podcasting to take into consideration:

The media landscape has changed drastically in the last five years — from the streamlined and widespread availability and adoption of podcast platforms like Apple Podcasts, Spotify, and the dozens of other big directories — to the proliferation of smaller and better bluetooth devices and headphones, smart speakers and homes, and connected cars.

Not to mention the widespread adoption of smartphones (the device of choice for many listeners), but also that podcasts are now going to find you no matter what device you’re on.

Apple just announced the death of iTunes and the rollout of a Podcasts app for the desktop.

Discoverability is taking giant leaps forward as well, always a contentious argument against getting heard in the vast cacophony of available shows, and new machine learning technology will improve how we search and find great content in audio formats.

Google now indexes podcasts in search results and they’re in the initial phases of transcribing podcast audio for even greater searchability, as are dozens of other big players.

Spotify recently leaked news that it will be putting podcasts on equal footing with music on its platform in a big bet on the medium, and they recently acquired three major companies in the field: Gimlet Media, Anchor, and Parcast.

And some other very intriguing food for thought

“… younger demographics prefer ad-free or ad-light experiences, they consume less broadcast radio and television, they consume subscription OTT content like Netflix, or, especially among Gen Z consumers, they take a publisher-agnostic approach to discover content from relatable creators — but they listen to podcasts.”
– Jonathan Spindel, Tuning In To Podcasting

So if podcasting has been around for a while, why is it such a hot commodity right now? Is it still “the new blogging” as Seth Godin dubbed it in late 2018?

The answer to the question is a riddle that lies somewhere between how you think of blogging and what the pioneers of podcasting were doing at the start (which wasn’t that long ago).

Though so many podcasters have their roots in public radio, some would argue that a lot of the early adopters were simply audio bloggers, while others believe that right now is only the tip of the iceberg for podcasting.

So why not jump in, the water’s fine?

“With expanding audiences and recent improvements to measurement infrastructure, brands should pay close attention to podcasting as an advertising medium.

“… Podcast listeners are an engaged audience who have opted into the content. The lean-forward listening experience has shown to correlate with strong audience responsiveness: 61 percent surveyed said they purchased a product or service they learned about from a podcast.” – Jonathan Spindel

Spoken-word audio is carving out a huge section of the future of the internet, thus a big wedge of content and marketing in general moving forward (take the similar boom in the audiobook market).

But if you’re thinking about starting a podcast, make sure you’re doing it for the right reasons and with the right intention.

It’s way too easy to become the noise in a podcast-savvy universe.

“We view podcasts less as an advertising channel and more as a content channel to win new customers and engage existing customers.” – Representative for Blue Apron

It’s important to keep in mind the “why” of any potential podcast, to think of it as a natural — if not more honest — extension of your brand “voice,” and initially as a top-of-funnel attraction strategy that won’t necessarily “blow up” the charts right away or make a million bucks.

How to make your voice heard, considering all the competition

Dan Misener, head of audience development at podcast-production studio Pacific Content, gave some great advice for potential creators on “cutting through the noise” at the outset:

There is so much spoken-word content to choose from now, that if you don’t come out of the gates with the industry best-practices in mind, you could end up in the churn of shows that don’t find their “share of ear.”

Podcasting may not be “the new blogging,” but it is here to stay and hotter than ever.

I defy you to spend an hour at any coffee shop or water cooler in America and not overhear the word uttered at least once.

Good luck! See you out there …

Previous article: Bored with Your Blog? These 10 Tips Will Make You Fall in Love Again
Next article: A Micro Audience: Your Macro Win