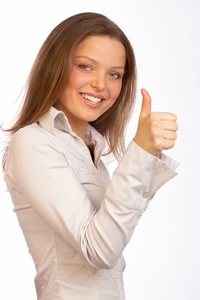 A beautiful woman sits alone at a bar. She’s had a long day. Clients were difficult, work piled up, and she scrambled frantically to get it all done. Now she’s tired and trying to unwind.

On either side of the woman sits a man. One is wearing a fancy suit, a gold watch, and has a briefcase next to him. The other man wears a baseball cap, a t-shirt, jeans and sneakers.

The man in the fancy suit starts talking to the woman. He tells her about his credentials and diplomas. He mentions his Ivy League education and his top marks. He’s impressive, and he doesn’t mind letting her know.

He talks about last year’s deals, each worth at least a million dollars. He bandies some big names around, and tells the woman how he has personal connections to each one. He mentions his luxurious apartment, his five cars, and his success stories.

Then he hands the woman a sleek business card with bold, gold lettering. He asks for her card in exchange and mentions that if he gets it, he’ll put her on his list of preferred customers (along with other hinted perks).

The woman turns to the other man in the baseball cap. The man strikes up conversation and asks the woman about her day. He listens to her answers. He asks more questions. He lets her lead the conversation, and he expresses empathy, nodding and telling her he understands how she feels.

The conversation revolves around the woman and the problems she faced. The man never talks about himself at all. He offers the woman some suggestions that might help tomorrow be a better day.

Who do you think got the woman’s number?

Previous article: SpeedBlogging: How To Write Better Posts In Less Time
Next article: How One Smart Move Can Attract Constant Attention