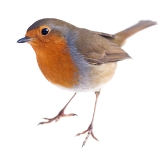 Spring has finally sprung here in the northeast, but I’m not sure any of us quite believe it. It could still be a snowy 10 degrees tomorrow. Twenty years in New England has taught me that.

Which is why I haven’t really done anything about the fact that my new studio did not come with screens for the windows.

I’m still opening them, mind you. And that little voice in the back of my head has been telling me that, at night while I’m sleeping, a bat could easily fly through and nest in my hair.

Only it wasn’t a bat. It was a little bird.

She flew in and up and then tried to fly out, but there was a window in the way. She panicked. And so did I.

I couldn’t figure out how to help her

I couldn’t grab her. I couldn’t guide her in the right direction. And no matter what I said to her, I couldn’t explain to her how to get out. (Dumb bird.) I couldn’t help her understand that she was okay, that I was going to make it better, that I wouldn’t hurt her.

Since the window was open, there was a narrow space between the top pane and the bottom — and she kept burrowing into it, so I couldn’t get her. And then she would finally come out and fly up and then into the window — only to head back down between the two pieces of glass again.

I stood there, pleading with her.

It’s so easy! Just fly down to where the window is actually open . . . or just let me catch you and put you outside!

But she wouldn’t listen.

She was frantic. She was breathing hard — and if you’ve never seen a bird breathe heavy before, it ain’t pretty. Her eyes were full of fear, I could see it even in their absolute blackness. They looked like they might pop.

I could see her path so clearly, but she just couldn’t

And I thought, how many times have I been this bird?

How many times have my friends and colleagues seen my way out when I couldn’t?

How many times have I seen theirs when they couldn’t?

And how many times did ‘some part of us’ see our own trail to freedom, but not clearly enough to actually follow the map?

Because you know when you’re that bird, right? You hit a crisis. You can feel the panic, you stuff yourself deeper into the problem even when you can see it’s not working. You dig further in, beating your wings against the window.

You’re too scared to stop what you’re doing, even though you know it’s pointless

I kept trying unsuccessfully to grab this bird, and I realized that I actually was frightened. Of a chickadee that weighed a few ounces and had a beak the size of a sunflower seed.

Fortunately, I have a neocortex. I took a deep breath, pulled my Geek Girl sweatshirt sleeves over my hands, and just went for it.

Strongly, but as if I was holding the most delicate glass ball in the world, I got her in between my hands and released her out the window. She flew up into a tree. I called out to her, told her she was okay now, that it was all okay. Trying to calm us both down after the ordeal.

I said to myself,

I both receive (on my own blog) and observe (on Copyblogger) emails and comments with people asking about the hows, whats, whos, whys and whens of writing, blogging, and marketing.

There seems to be a lot of wing flapping and wheel spinning — and much confusion, much looking for ‘the ultimate way’ to success.

What’s got you flapping?

All of the above? Is seeing that list maybe bringing out a little panic of your own?

By the way, about an hour later, I went to look out the window and see if I could see that little bird, hoping she was okay.

But I got distracted when I saw she had crapped on my window.

I forgave her immediately, of course. Because I understand. Sometimes this stuff scares the crap out of me, too.

Previous article: Online Business Disaster: Where to Go When the Volcano Blows
Next article: Johnny’s Copyblogger Wrap-Up: Week of April 19, 2010