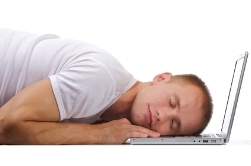 Before you get too impressed, hear this: I did it all in self-defense.

Let me give you some quick background.

I have extreme Tourette’s Syndrome, as Sonia noticed recently. Tourette’s makes people move or vocalize involuntarily and occasionally results in unspeakable awesomeness. My motor tics range from eye blinking to punching myself in the face to even stranger things. My phonic tics range from clearing my throat to hooting and yowling and snarling and slobbering and screaming like the Tasmanian Devil.

Did I mention that I work in a quiet library?

There are only a couple of things that help when it gets bad. Guitar, kettlebells, talking, and writing — they are all forms of distraction that force the itch out of my brain for a while.

But sometimes none of them work. In September I was having a horrible time and couldn’t shake it. I needed a project to focus on. A big fat distraction.

Come one, come all!

I asked everyone who wanted a post to provide:

I said I wouldn’t write about anything I felt was unethical, morally reprehensible, or obvious spam. I didn’t want this bio floating around the web:

About the author: Josh Hanagarne is the author of Cialis Rules! He enjoys popping a few Vicodin in the morning and a dozen Viagra for lunch. His hobbies include MAKE CRA-Z MONEY FROM HOME! and topless tell-all webcam romps.

Luckily, I didn’t get any of those solicitations. Well — not many of those.

I published my post, subtitled “Let’s Get Stupid,” at about seven in the morning in the United States. By one o’clock my teeth were chattering with fear as I looked at my inbox: over 70 submissions.

Who were these people? I was going to be writing guest posts for blogs about stock options, personal development, computer programmers, home schooling, study skills mentoring, blogging, advice for women, fussy academics, chemists, Capoeria buffs, kettlebell nuts, corporations in the process of building websites and trying to make everyone get along, and so on . . . .

A smarter man, a man whose brain was less of an apocalypse, might have scaled things down or extended the deadline. But this was exactly what I needed.

The first week and onward

I wrote 15 guest posts in week one. They all published within a few days. When the dust cleared, RSS numbers had jumped by 200 during those seven days.

After about 10 days, my tics had subsided, but I was committed to the project. I was having a blast.

Lessons learned, surprises, and observations for anyone who wants to try this

By November 1 I had written over 50 posts. 42 of them had aired on other blogs. Here is what I learned:

I don’t regret doing the marathon, but I won’t do it again if I don’t have to. I still have nearly 40 posts to get through before I’ve knocked out that initial batch. I’m going to honor them all. In the meantime, if you’d like to be added to the queue, you know where to find me.

I can handle it.

About the Author: Josh Hanagarne is the twitchy giant behind World’s Strongest Librarian, a blog about living with Tourette’s Syndrome, kettlebells, book recommendations, buying pants when you’re 6’8”, old-time strongman training, and much more. Please subscribe to Josh’s RSS Updates to stay in touch.

Josh Hanagarne is a writer, speaker, librarian, and the author of The World's Strongest Librarian: A Memoir of Tourette's, Strength, Faith, and the Power of Family, which recently received a rave review from The New Yorker. He works on level 3 of the Salt Lake City Public Library, loves his job, and doesn't plan on leaving.