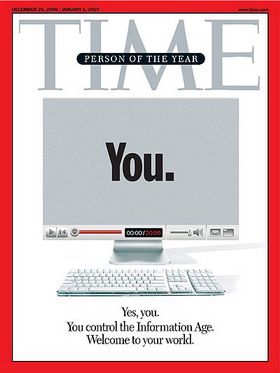 Lead up to the bubble:

In 1994 the Internet came to the general public’s attention with the public advent of the Mosaic Web browser and the nascent World Wide Web, and by 1996 it became obvious to most publicly traded companies that a public Web presence was desirable…. These concepts in turn intrigued many bright, young, often underemployed people (many of the so-called Generation X), who realized that new business models would soon arise based on these possibilities and wanted to be among the first to profit from these new models.

Now, what effect do you think Time Magazine’s Person of the Year will have on 2007?

Good call by Darren — Linkbait of the year. Check out the unbelievable buzz over at Techmeme.

Be happy that you’re an early adopter. 🙂

Previous article: The 37 Signals Approach to Copywriting
Next article: Do You Spend $10,000 a Month on Pay Per Click Ads?