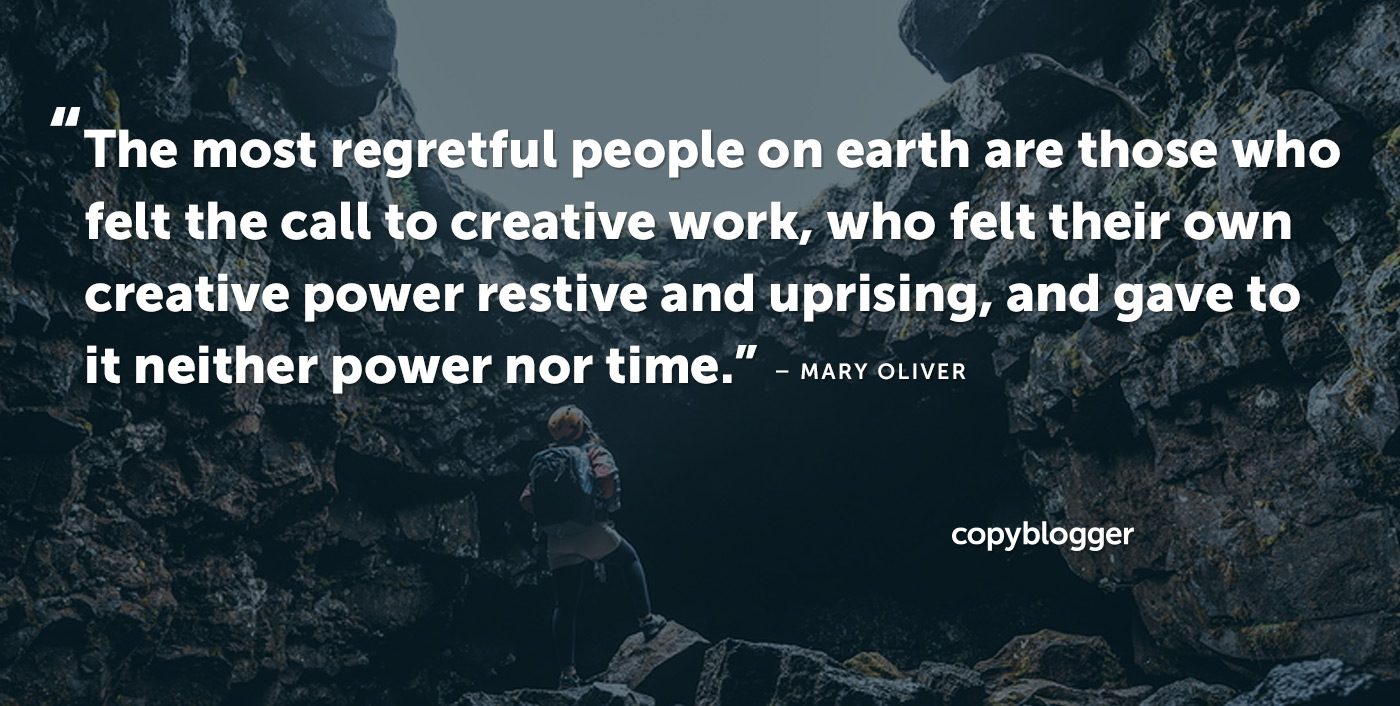 When I was a teenager, I was a prolific poet.

Not a good one — not even close — but I didn’t care. I didn’t plan on showing my work to anyone. I wrote simply because I loved it.

I spent hours in my room, at a park, or even those quiet moments at school, pulling words out of my head. I edited and honed, and sometimes put those words to music.

In college, I managed to keep up the habit for a while, but by the time I graduated, poetry had been crowded out by more “important” pursuits.

At first, I didn’t miss it. I was so busy chasing my new career, I forgot entirely how much I used to love writing poems and songs.

But a few years into my post-college life, I started to feel something was missing. Some spark, some creativity, had seeped away. I wasn’t sure why, until one day it hit me.

The battle for my time

Ever since that realization, I’ve tried to write poems and songs again, just for fun. But the habit never sticks like it did in high school.

My go-to excuse is time. As a teenager, time was plentiful. My to-do lists were short, and it was gratifying to complete them and bask in my unencumbered time.

But now, I never see the end of a to-do list. As soon as I finish one task, four more crop up in its place.

Even worse, when I do have ideas for poems or songs, I tend to let them wash over me and away.

Instead of taking two seconds to jot down the idea, I plow ahead with more “practical” work. Telling myself, “Oh, that’s good. I’ll remember it later.”

Guess how many ideas I’ve remembered so far.

“A hundred meals without mustard”

One day, feeling particularly down about my inability to make time for creativity, I read some advice from Mary Oliver’s Upstream, which struck me to my core.

She writes that creativity needs uninterrupted time and solitude, and though some interruptions come from outside demands, many of them are “from the self itself.”

“And what does it have to say? That you must phone the dentist, that you are out of mustard, that your uncle Stanley’s birthday is two weeks hence. You react, of course. Then you return to your work, only to find that the imps of idea have fled back into the mist.”

To capture and nurture these ideas, Oliver writes, requires a different approach:

“It is six A.M., and I am working. I am absentminded, reckless, heedless of social obligations, etc. It is as it must be. The tire goes flat, the tooth falls out, there will be a hundred meals without mustard. The poem gets written.”

To Oliver, all of her responsibilities, the mundanity of life, were secondary to her creative work.

It occurred to me, then, that my problem wasn’t about time at all. It was about value.

When I refused to disrupt my routine to write down poetry inspiration, when I refused to spend time writing to instead go buy groceries, I reinforced a belief that those poems or songs were unimportant.

I’m no Mary Oliver; I don’t aspire to make a living writing poetry or songs. But I knew that if I continued to ignore that part of myself, it would only end in regret.

Right then, I decided I didn’t want my creative writing to be dwarfed by adequately inflated tires and mustard any longer.

A decision to stop

The other day, I was running errands on my motorcycle. I was in a hurry — I had quite a bit of work to do when I got home.

But as I was flying down the highway at 65 mph in the left lane, something rare and magical occurred.

A song appeared in my mind.

Not the whole song, just the chorus. But I loved it immediately, and knew I wanted to hold onto it.

My first impulse was, as usual, to try to commit it to memory, and hope it would still be there when I got home.

But then, I remembered Mary Oliver’s mustard. I wasn’t going to wait. For once, I was going to value my inspiration and honor it as it happened.

I took the next exit and pulled into a Burger King parking lot. Through my helmet, I sung my song into my phone, then got back on the highway and continued my trip.

It didn’t cost me more than a few minutes, and I was likely just as productive that day as I would have been if I hadn’t stopped.

But in exchange for those few minutes, I gained so much in confidence and creativity.

Give inspiration power and time

Pausing my day to capture my song felt wonderful. For the first time in years, I didn’t have to watch regretfully as an idea slipped out of my mind.

But the triumph that day wasn’t just capturing that one song.

It was taking a first step toward recapturing my creative spirit, and learning what it meant to give it value in a new phase of life.

Because, as Mary Oliver writes:

“The most regretful people on earth are those who felt the call to creative work, who felt their own creative power restive and uprising, and gave to it neither power nor time.”

Previous article: A Micro Audience: Your Macro Win
Next article: How to Unleash the Secret Superpowers of Numbers in Your Copywriting