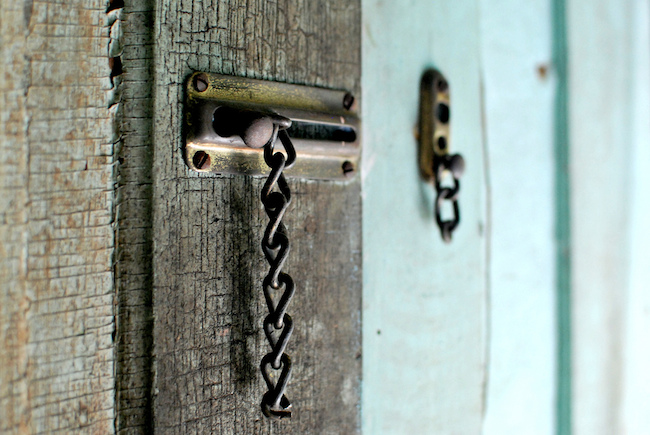 “What we need is to tell a powerful story on our thank you card,” I said.

The team unanimously agreed to the concept and in minutes volunteered me to lead that storytelling project. This happened in the volunteer marketing team meeting at Sankara Eye Foundation, which has helped perform one million free eye surgeries in India.

Sending a thank you card is an annual project at the non-profit. We send out tens of thousands of thank you cards to all the donors and, of course, ask for more donations in the same outreach.

The task was clear and the constraints were set: a powerful and engaging story had to be told on a single thank you card.

Constraints generally denote problems. There is a negative connotation to the word itself.

But that is not the only way to look at constraints.

They can be positives too. It just depends on how you look at them.

Touching (in more ways than one)

It took several days and at least a dozen iterations before I was happy with the copy and the design.

Here is how the final card looked: 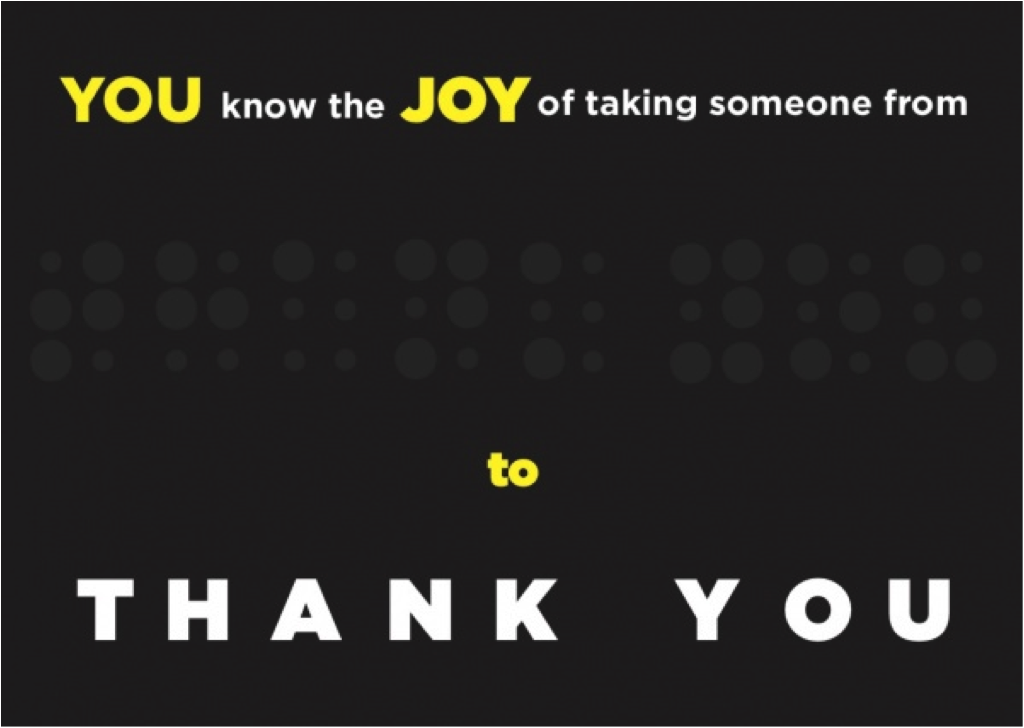 The recipient could clearly feel the emotional appeal. The entire story was encapsulated in one single sentence:

The Braille section was embossed to create the “touching” part, both literally and figuratively. We had to tell a story in line with the theme of eradicating curable blindness. The design above achieved that while acknowledging the past and future contributions from the recipients (donors).

The verdict? The card was a hit.

Not only did donations pour in, but there were requests for more cards to be printed because people wanted to keep them as souvenirs.

A few years ago, I realized that constraints were really blessings in disguise.

My biggest learning and growth came when I worked through the constraints along the way. Whether the outcome was a failure or a success, one thing was common: there was huge personal growth as a side effect.

I have dozens of examples, and I have chosen from the world of writing to make my point:

The first four books I wrote were based on fiction. A story of how my first book got published (and the constraints involved in the journey) is here.

My recent books are all related to some aspects of business. I always wanted to write another fiction book one day. Since a wish alone is not good enough to move the needle, no real progress was made.

In 2009, I heard about National Novel Writing Month (NaNoWriMo) — a movement to help aspiring and veteran authors start and finish at least a 50,000-word book in the month of November. The 30-day constraint and 50,000-word limit were intriguing.

I signed up right away and made a plan based on daily word counts. The math was simple: if I wrote 2,000 words a day, I would be well ahead of the schedule. I stuck to the plan for the first few days and was happy about it.

A group of us met at a fellow author’s residence for a writing blitz. The first few minutes went by discussing where each of us stood on the word count. Most of us were in the same range, but the host said she was at 2,500 words.

There was silence for a moment.

Everyone felt she was running way behind, but before someone spoke the host continued, “But not to worry as this is my third book this month.”

The host explained that she has a different approach to writing in November. Her trick was to set an even more aggressive constraint (say eight days to complete writing the book), then all of a sudden the earlier constraint (30 days) seemed like nothing big.

This incident reset my outlook on constraints, reminding me that constraints are relative. It was a big lesson to learn.

Long story short: I completed 55,000 words on November 19. As you can see, this was well in advance of the November 30 deadline.

I resisted using Twitter for a long time, thinking it was a total waste of time. I even told several of my friends that they were wasting time on Twitter.

“After all, what can you really say in 140 characters?” was my explanation.

In one such conversation, my classmate Navin Nagiah (currently the CEO of DNN Software) asked me a question back: “Raj, is it that Twitter is a waste of time or that you don’t have what it takes to make the most of what the platform provides?”

It made me think. A lot.

The constraint immediately seemed like a challenge — an open invitation to test my creativity.

After a few days, I started writing a book using Twitter. It was my own collection of tweets to make people think, each with the hashtag #ThinkTweet.

It took longer than I thought to come up with 140 ThinkTweets, but it was worth the effort. It made me think about and rewrite the same idea multiple times before I posted it on Twitter. It was a lesson in learning how to say a lot in a very few words.

The book, titled ThinkTweet (foreword by Guy Kawasaki), was published in partnership with my friend Mitchell Levy.

Today, we have more than 75 books in the series, all in the format of ThinkTweets on various topics.

I teach storytelling for startup entrepreneurs. I thought it would be good to have a set of stories through which I can explain the fundamentals of storytelling.

Mini sagas are stories that are told in exactly 50 words each, not a word more or less. Dan Pink revealed the concept to me in his book, A Whole New Mind.

So I started writing mini sagas not just for the sake of writing them, but with a purpose: to teach the craft of storytelling.

I fumbled. I fell down and got bruised everywhere because it was not as easy as I thought it would be.

Finally, I found an approach that made writing mini sagas a breeze.

Here are a couple of examples:

The sales team in a startup was jazzed after a great customer presentation. The startup VC had a prior relationship with the customer. He called the customer and asked if he would buy the system from them. The customer politely responded “No way. The meeting was only for market research.”

It was a good year for John. His hard work had handsomely paid off albeit with sacrifices on the family side. When he told his friend Bob that he had many reasons to be happy about the year, Bob asked – “Why do you need a reason to be happy?”

The above mini sagas have all five elements of a good story: exposition, conflict, rising action, resolution and denouement.

And these mini sagas — thanks to the constraint of their format, not in spite of it — became valuable tools in helping me teach storytelling to startup entrepreneurs

A 5-step plan for seeing constraints as blessings

So how do you learn how to take a constraint and turn it into something that works for you instead of against you?

Here are five steps that will help:

1. Alter how you view constraints.

The majority of people whine and complain in the face of constraints. So it is easy to get carried away and join the majority.

The problem with whining and complaining is that it simply gives you a license for inaction.

The moment you begin looking at constraints as challenges and opportunities presented to you, your world will be different.

First, a definition of the beginner’s mind (from Wikipedia):

Shoshin is a concept in Zen Buddhism meaning “beginner’s mind.” It refers to having an attitude of openness, eagerness and lack of preconceptions when studying a subject, even when studying at an advanced level, just as a beginner in that subject would. The term is especially used in the study of Zen Buddhism and Japanese martial arts.

Constraints present new territories that you have not traveled before. Without an open mind, the journey gets rough.

With an open mind, you will start noticing possibilities that you didn’t notice before.

Effectuation, according to Darden professor Saras Sarasvathy, is “a logic of thinking, discovered through scientific research, used by expert entrepreneurs to build successful ventures.”

While Prof. Saraswathy was referring to this in the context of entrepreneurship, effectual thinking is useful for anyone who is trying to get something done.

You have to start somewhere. Just know that the first iteration of whatever you create will be not up to the mark.

The journey has to begin, and you will go through several iterations before you are finally happy with what you have produced.

Last but not the least, getting good help is not a sign of weakness.

If and when you need help, it is important to drop your ego and ask for a favor, or do some kind of a barter and get the help you need.

What current constraint in your life or career can you flip into a blessing or opportunity?

Rajesh Setty is a serial entrepreneur based in Silicon Valley. He currently serves as president of WittyParrot, is an award-winning teacher at the Founder Institute, and has authored 13 books. You can read his blog and follow him on him on Facebook or Twitter.

Previous article: A 3-Step Formula for Captivating Your Audience With a Few Opening Lines
Next article: 12 Writing Exercises That Will Transform Your Copy Today