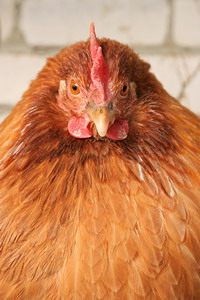 Do you want to know the real secret of success?

Okay, I’ll tell you. But first I want you to meet my grandparents. They lived in the heart of West Virginia. As a child, I spent many long summer days at their home, running in the wide green yard and splashing through the creek looking for crawdads. I’d play until my grandmother called me in for dinner.

The meals were never fancy but always fresh because my grandparents raised a lot of their own food, including corn, potatoes, green beans, strawberries, grapes, cabbage, tomatoes, carrots, onions, and a few chickens.

One afternoon, I was sitting behind the house with my grandmother, who was peeling potatoes and stringing beans. She asked me what else I wanted for dinner. I told her chicken. So my grandfather, who was sitting nearby smoking his pipe, quietly got up and walked to the henhouse. A few minutes later, he came out carrying a dead chicken by the feet.

He walked up to me and said, “Start plucking the chicken.”

I had seen my grandparents prepare many meals, but I had never really thought about the process. I was just a little boy. And it had always seemed that food just magically appeared on the table.

It was just that simple. Point A. Point B. And he was showing me the line from one to the other.

So I sat down with that limp, bloody chicken and plucked every feather, hesitantly at first, but then with sureness and determination. And while I must admit that I didn’t eat very much of that particular chicken, I’ve never since taken any meal for granted.

And that, my friend, is the real secret of success. It’s not a formula. It’s a way of thinking. It’s an approach to life and to work. It’s having the clarity of vision to see what needs to be done and the focus of will to do it, simply and directly.

It’s a rare gift. It’s the thing most people don’t understand about life – especially about anything where results matter. They mistake simple for primitive, direct for unsophisticated. So when it comes time to make something happen, they look elsewhere for answers and never make the obvious connection between A and B.

I’m in the direct marketing business. I make most of my income writing and designing direct mail for businesses all over the country. Many years ago, an advertising agency in my neighborhood hired me to consult on a direct mail project for one of the biggest nonprofit organizations in the country. One glance at the client’s test results revealed that the successful mail pieces featured big red stickers, the kind you often see on magazine subscription offers.

So one of my recommendations was to use a sticker in the new direct mail piece. From the expression on the designer’s face, you would have thought I had just relieved myself on the conference room carpet. He crinkled his nose in disgust and informed me that the agency “didn’t do stickers. They’re tacky.”

That designer wanted success, but he wasn’t willing to do what it took to make success happen. He was too concerned about irrelevant matters, such as aesthetics, his own personal likes and dislikes, and what his colleagues might think. Even when I pointed out that those ugly stickers are proven to get a better result, he simply wouldn’t consider them. End of discussion.

Success is not brain surgery. The obvious thing to do is usually the right thing to do. And the right thing to do generally isn’t all that hard. I’m not saying you should do anything to be successful, especially if it’s illegal or unethical. I’m just saying that you have to get your priorities straight. Be clear about what you want to do. Then have the courage to roll up your sleeves and do it.

For me that often means doing ads that are ugly and won’t impress anyone, but which make money for my clients. For you that might mean concentrating on your blog content rather than spending weeks or months tinkering with design. Or maybe it means meeting with clients even if you’re shy, working late when you’d rather be partying, or rewriting copy for the tenth time because you know it’s not good enough yet.

Charles F. Kettering, inventor of the electric self-starter for cars, once said, “My definition of an educated man is the fellow who knows the right thing to do at the time it has to be done…. You can be sincere and still be stupid.” Indeed. The world is full of sincere, hungry people waiting for food to magically appear on the table.

But let’s not bother with them right now. It’s almost time for dinner and we have work to do. While the rest of the world frets about ruffling feathers, let’s get busy plucking the chicken. We’ll eat. We’ll laugh. And we’ll drink a toast to our success.

Previous article: The Richard Branson Guide to Making Money With Blogs
Next article: Why Writing for Spiders is the Least Sticky Strategy of All