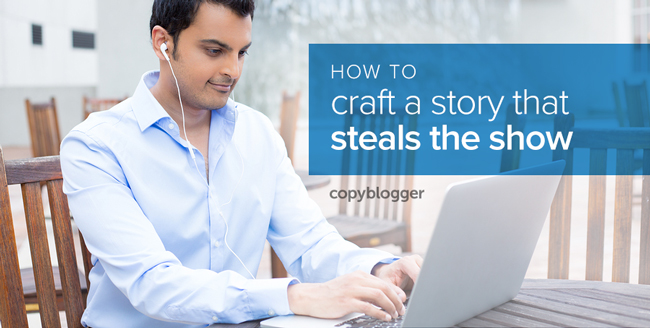 You’re great at writing copy, articles, and other long-form content. But do you stare blankly at the computer screen when it comes time to write a speech?

Maybe it’s because you are nervous about actually giving the speech live — which produces much more anxiety than clicking “publish” to make a blog post go live.

You can always go back and edit the post if you find a mistake or get an idea that will improve it. You can’t do that when giving a speech, though.

Once the words come out of your mouth, they’re out there and the moment is gone. And when giving a speech, the only thing that matters is the moment when all eyes are on you.

In this post, I’m going to address how to create content that is ready for prime time and how to be ready to steal the show when it’s your moment.

You’ll find these topics and more detailed in my new book, Steal the Show.

Excellent public speaking can be used to promote your big ideas, as well as change and transform the way people think, what they feel, and what they do.

Your performance can save the world. Literally.

If you want to make a world-changing impact, you must:

Sometimes, the “expert” doesn’t know that much more than the novice. He or she is often perceived as an “expert” simply because his or her information is better organized.

A big idea supports the promise of your speech.

Sure, it’s the main point you want to make, but it’s also a statement of conviction that takes a position on whatever your topic may be.

A big idea shows the audience the world as it is and how much better the world could be if your idea became a reality — that’s the promise of your speech.

It also demonstrates how much worse their world will be if they don’t adopt this new way of thinking or being.

You don’t need to be different to make a difference

Your big idea doesn’t need to be original, as long as your big idea is rooted in your overall expertise and beliefs.

The same goes for your content. It doesn’t necessarily need to be different to make a difference.

Your big idea is the foundation of your entire performance. It delivers a big promise to the audience.

However, no matter how world-changing your big idea is, the audience must connect the dots between the message and the messenger.

Your big idea won’t resonate if your audience doesn’t understand why you are a credible messenger and why it has to matter to them.

The message must have a messenger

In one of my masterclass seminars, a young U.S. Navy officer was working on a keynote speech about domestic violence and approaches for reporting and stopping these behaviors in the military.

For personal reasons, he wouldn’t reveal why he had chosen to deliver this speech. The result was that no one in the seminar could understand why the officer had taken ownership of this topic.

Had he committed abuse and was making amends? Was his sister a victim of abuse?

If he’d only been able to discuss the situation a little more openly and explain why this topic was so important to him, the audience would have understood and seen him as an impassioned messenger.

The following questions will help you develop and evaluate your big idea:

Frame and organize your big idea

When you organize your information for your audience, you organize the way they hear it and think about your topic.

That’s a great service for them whether you’re talking to two venture capitalists or an auditorium of 150 colleagues.

It also helps you give the presentation. The better organized it is, the easier it is for you to remember the structure and content.

Thankfully, you can organize your ideas using a few blueprints that have worked for countless nonfiction bestsellers, keynote speeches, group presentations, panel talks, and lectures.

These frameworks give you the tools to lead your audience to your big idea and underlying themes. They can also be combined and used together.

I’ll use books as examples rather than speeches, because it’s more likely people have read the same books than have heard the same speeches.

Just don’t read them off a piece of paper. Instead, you can create an outline with key points, supporting points, stories, and more.

But, that doesn’t get you off the rehearsal-hook.

I teach some of my students to write and memorize speeches. They learn how to perform with spontaneity, authenticity, and ease; the audience feels like the entire speech was crafted in the moment.

Others prefer to follow the outline structure explained above and improvise their way through the framework (that’s not the same as winging it). They often use sticky notes to organize and memorize all the various components of the speech: key points, stories, audience interaction, call-to-action, and more.

To do either well, rehearsal is required. If you’re interested in learning how to rehearse, read Steal the Show. I’ve dedicated chapter 14 to this topic.

In the meantime, use these seven steps for creative and effective content development and writing.

Elements of the spoken story

As you begin thinking about and writing potential stories, it’s time to incorporate the elements that make up good stories for public speaking and performance.

You may have heard that it’s important for stories to have a beginning, middle, and end. That’s like telling me it’s important to kick a soccer ball “with a foot and five toes.”

A story may have a beginning, middle, and end, but knowing that won’t necessarily help you tell a better story.

Use this three-step process for telling terrific true tales

How to shape every story with the three-act structure

Here’s an example of how you can also use the three-act structure in each story you tell.

Let’s say I was telling a story about meeting my fiancé’s parents. (This is a completely fabricated story. It’s fake. It didn’t actually happen. I don’t drink wine, I was never engaged to a woman named Mimi, and I definitely don’t bake pies!)

Act One: The given circumstance. Setting, time, and place. Hopes and objectives.
Mimi’s family is very close … much closer than mine. They still live in the same house where she grew up. I couldn’t wait to see her old tree house and sit on the roof when everyone else was asleep.

The first time I met her family was during Thanksgiving. I made a pie, my secret recipe. She promised her parents would love me. I was going to prove to them that I was perfect.

They would say, “How did we ever survive without Michael?”

Act Two: The conflict. A struggle. Obstacles in the way.
Everything went wrong. I dropped the pie, and the dog ate it. Then the dog got sick.

We drove the dog to the vet while the turkey was burning in the oven. The dog turned out to be allergic to my secret ingredient — coconut.

And then we got in a car accident with her parents’ car. No one was hurt, thank God. But all the food was cold by the time we got back, and no one had eaten a thing. We had to have hamburgers for Thanksgiving dinner.

The whole time, I just thought about how I had let Mimi down. I knew this would be our first and last holiday together.

I was sneaking another glass of wine in the kitchen when I heard Mimi and her mom talking in hushed tones. I snuck over to the door so I could listen.

She wanted us to go. She wanted me to go. I understood why. This was not the picture-perfect holiday they had envisioned.

Act Three: The resolution. A change. Progress. A transformation.
But you know what Mimi said?

“This has been my favorite holiday. Because all the people I love are here together. Give Michael another chance. Give Michael a hundred more chances. Maybe he’s not perfect. But he is perfect for me.”

We’ve had four more Thanksgivings since then. And each time something has gone wrong. But now it feels like home. It’s better than perfect. It’s ours.

A good verbal storyteller can make an average story on the page sound really darn good.

There is much more on storytelling in Steal the Show.

Anyone can start something. Only a few finish.

You, my friend, are a finisher. And that is something that should make you proud.

Together, we set out to demystify speech writing, and I think we did a bang-up job.

We peeked inside the presentation process, so you could see where big ideas start and how they can come alive through your performance to change the world.

We also dissected the three-act structure so we can tell compelling stories out loud — not just on the page.

To learn more, head on over to StealTheShow.com and pick up a copy.

Called "an uncommonly honest author" by the Boston Globe, a "marketing guru" by The Wall Street Journal, and a "sales guru" by the Financial Times, Michael Port is a New York Times bestselling author of six books including Book Yourself Solid, The Think Big Manifesto, and his hot new release, Steal the Show.

He was also once a professional actor, having received his MFA from the Graduate Acting Program at NYU, guest starring on shows like Sex & the City, Law & Order, Third Watch, and All My Children and in films like The Pelican Brief and Down to Earth.

These days, Michael can be seen regularly on MSNBC, CNBC, and PBS as an on-air expert in communication and business development. Find more on how Michael can be helpful at MichaelPort.com.