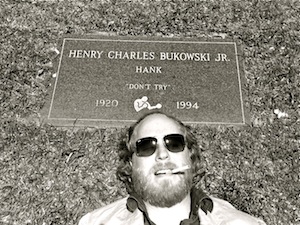 Henry Charles Bukowski, Jr. was, in my opinion, the greatest American fiction writer of the last half of the 20th century.

Fortunately for his book sales, most think of him as the archetypal drunk, misanthropic male pig. Whatever else he was, he was also the archetypal writer, a force of nature who knew exactly what to do to a blank page.

He thought and talked deeply about the craft of writing during his lifetime, and on many occasions, he bluntly voiced his opinions about what works, what doesn’t, and why.

He once wrote what he thought was the secret to all immortal writing.

I think his “secret” — though stated in the context of fiction — is just as important for copywriters and content marketers.

As I’ve only spent a few minutes with his now 18-year-old corpse lying in San Pedro (see photo above), I can’t speak to his personal life. But the words, the lines, the books, they are evidence of a generous, staggeringly imperfect, stoic genius, and suicidal lover of life.

Before (and after) his relatively minor fame hit, Bukowski spent decades mailing his poems and stories to small press magazines, mimeographed booklet makers and the like. Thousands of pages, hundreds of thousands of words. Usually going out to editors as originals, no carbon copies.

He once estimated that he’d lost hundreds of poems this way, the publisher often wouldn’t return the rejected work, and it was gone forever. It forced him to move on, to work deliberately, to type through it again and again and again without sentiment.

The poetry business, in my opinion, is a largely inbred, favor-driven, audience-less racket. Most people never even think about poetry until Terry Gross drags some poor, expressive soul into her studio for a literary interview. And when The Poet begins to talk, most people switch the channel.

How did he do it? How did he go on to sell endless books of poetry and finally lay himself down in the dirt earning an almost six-figure literary income?

It’s not a simple answer, but, like so much of his work, he states it simply for us:

The secret is in the line. ~ Charles Bukowski

That’s it. He didn’t have a 10-point PR plan. No elaborate marketing structure. No budget. No reader polls. No blog. And there was, of course, no Twitter in 1970.

Such is the faith he placed in the power of the written word alone.

Eventually, John Martin built Black Sparrow Press and offered him $100 a month for life if he’d quit his job and write full time. And much of his early fame came from writing a column in the free weekly newspaper Open City (content marketing anyone?).

But Bukowski attributed so much weight to the single line that it eclipsed all else in his philosophy of writing. If the single line was magnificent, the rest would take care of itself.

Do you possess this kind of love for your words? Do you respect your craft enough to narrow your focus to the attention of a single line? It’s not easy. It’s not fast. But this must certainly be a path to immortal (and powerfully influential) writing.

If you can stomach it.

Previous article: The Top 10 Ways to Get the Traffic You Crave
Next article: How to Know if You’re Entering a Viable Niche