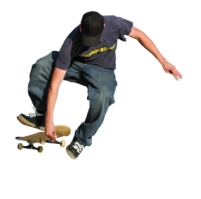 If you hang out here on Copyblogger, you’re probably trying to figure out how to expand your readership and make your blog popular.

You’re here because Brian Clark is a pretty cool guy, and he seems to know what’s up.

He has this shiny blog, a rockin’ team, billions of subscribers, good hair, a nice car and a pretty wife.

So maybe you’re hoping that if you hang out with Brian long enough, listen to what he has to say, read his blog’s posts and become one of his inner circle, that some of his coolness will rub off on you and your blog.

You’re hoping that your blog becomes cool by association.

You’ve done this before. We all did. In high school, we all worshiped the popular kids, the cool kids that could help us be cool too.

And just like back then, you’re probably going about it the wrong way.

High school movies try to show the popular guy and gal as a cookie-cutter ideal. They’re the head cheerleader and the head jock — always surrounded by a huge crowd of other cheerleaders and jocks in identical uniforms, who all talk, walk, look, dress, and mock any outsiders in the exact same way.

In the movies, the popular kid is just like all the other kids, but a little more perfect.

You might easily be fooled into thinking that hanging out with someone popular makes you the popular kid you want to be.

The cool kid didn’t give a damn what anyone thought about him. He had a wacky hobby that he was pretty good at, maybe motorbike racing or painting or staring off into nothingness in an alluring way. He might be a jock, but he could take his sport or leave it. He didn’t play high school politics. He didn’t have obvious crushes. He never created drama.

And everyone liked him.

Even the popular kids liked the cool guy. He wasn’t a part of their crowd, but he was still cool, you know? They never made fun of him. They respected him.

This is the guy you want to be in the blogging world. Think of every uber-popular blog you know of, and then think of the person who writes that blog.

Guy or gal, they’re cool.They know their own niche inside and out, they don’t give a damn, and they get along with everybody, even if they don’t hang out with those people regularly.

Chris B and Darren are cool. So are Chris G and Naomi and Dave.

Note that not one of the people I just mentioned could be mistaken for any other person. This brings me to the other important point you need to remember about the cool kid when you’re trying to blog like one.

This is the most important element to remember as a blogger.

Differentiate yourself. Have a unique voice. Be special in your own way. There are so many blogs out there nowadays that it’s near impossible to start blogging on a topic that hasn’t been discussed a hundred times already.

But that’s okay. The cool kid didn’t have a hobby that no one had ever heard of before. He just did what he liked to do in a way that made it seem really awesome — and made you kind of wish you’d thought of doing it first.

Even if you did think of doing it first. The cool kid just did it way cooler than you did it. He was the one who made martial arts or playing the saxophone or climbing trees original and cool and worthwhile.

Here’s something else that made the cool kid cool — he didn’t make a point of showing off how cool he was. He just did what he did, and it was fantastic.

Likewise, don’t keep pointing to your unique coolness. Just let it show up in your blog naturally. Be cool about it.

And suddenly you’ll be that guy, that really cool guy who happens to blog about penguins or marketing or economics.

The topic isn’t important. Being yourself, being cool about your topic, is.