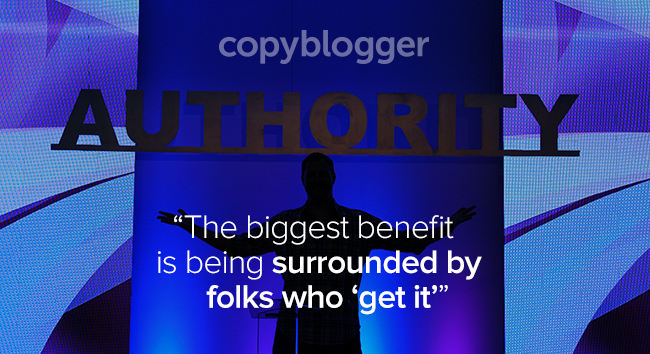 The Early Bird Price for Authority Rainmaker ends today, so I had a message planned for today making one final case for why you should join us in Denver, Colorado this May.

But then I read what Raubi wrote on Friday about how much last year’s event accelerated her career.

The quick version: She came to Denver questioning why she was even in the room; she left prepared to take a leap of faith and bet on herself. So she did. Now she runs her own company.

She got clarity, so she got moving.

(By the way, we didn’t ask Raubi to write about her experience. She wanted to share her story.)

I read that article … and suddenly what I had to say about Authority Rainmaker didn’t seem to matter so much anymore.

Here’s what does matter …

What mattered about last year’s event is what you — or people like you, people like Raubi — took away from it.

And what will matter most about this year’s event is what you — or people like you, including Raubi (who already bought her ticket to come again) — will take away from it.

Since nothing predicts the future quite like the past, I spent some time looking back at what people said about last year’s event right after it happened. What those folks were thinking, feeling, and saying to their own audiences on their own accord after the event is far more relevant than anything I could write here.

Why? Because it’s the most accurate predictor for how you will be feeling on May 15 after this year’s event, should you choose to invest your time and money to attend Authority Rainmaker.

So, instead of the post I was going to write, here’s a sampling of what people who are a lot like you were telling their audiences after last year’s Authority event …

I would have to say the biggest benefit for me (and what I’m looking forward to again) is being surrounded by folks who ‘get it’ and being able to have spontaneous conversations about things that most people IRL don’t know/care about.

Even before landing in Denver I was confident I’d come away from the experience with increased knowledge and things to act upon. What I wasn’t expecting was to leave newly inspired to create things that matter and to produce art. Woah.

Authority Intensive marked the end of my struggle, the end of my meandering blog, and the end of me not starting. Once I was able to experience the truth about being an authority, I understood what I needed to do.

I made more meaningful connections than I could have ever expected because people came with an open mind, no matter their background, and treated everyone like he or she could be the next Jeff Bezos.

What I loved most was the people. It was a great opportunity to network, and I made connections with people that I’m still in regular contact with today. My initial hesitation was the price, but the line-up, and commitment to investing in myself to advancing my business pushed me over the hump. This year — honestly, it didn’t even matter who the speakers were, or the agenda. I’m most excited about the people. Deepening relationships that were formed last year and creating new ones. See you there!

I was quick to sign up when I heard that Copyblogger was hosting their first content marketing conference. They had a lineup of speakers that was a roster of my heroes. The other great aspect of the conference was that we were all in one room so we didn’t have to choose between sessions.

The best part about Authority Intensive was the energy. With so many smart people in one room, you are bound to get wrapped up in the excitement of the moment. This event was unique in that I’m still very much feeling that excitement a week later. I’m still poring through my notes to identify actionable goals that we need to execute on. Here is the list so far: [21 bullets].

It was, in a word, AMAZEBALLS. It was a lot to take in. Two REALLY full days of content, and I have to admit that my brain was threatening to explode a bit. After two full days of learnin’, and three open bars, I needed to go home, put my feet up, and just let things percolate for a bit. Yeah, that lasted about a day before I wanted to DIVE back into my notes and pull out all the goodies I had scribbled down.

It was a good time start to finish. The people were super-nice, not haughty or arrogant at all, even though I’m not in their league yet. This year I have a daughter joining me — that’s how valuable I think it is. You will be glad you came. And while you’re there, find me and share a conversation over a drink or during a break. Almost forgot — I’d never been to Denver. Cool town.

I was in Denver, CO last week, attending the first-ever live event from the Copyblogger.com folks. Their ‘Authority Intensive 2014’ was sold out. It may be the best conference I’ve attended on copywriting and content marketing.

Overall I thought the content was great and would recommend the 2015 event to anyone who was not able to make it this year. I have already bought two tickets for my team. I like the format of single speakers and few panels as well as everybody attending the same sessions. I came away from the conference inspired with a bunch of new ideas and projects to work on that will significantly improve our marketing and business success.

Their stories could be yours

What one monumental step will you be ready to take on Friday that you arrived afraid of on Wednesday?

We’ve planned the networking events and curated the content of Authority Rainmaker so that it’s the kind of place where fear turns into action and confusion becomes clarity. That’s why you go to conferences in the first place.

It happened for Raubi and so many others last year.

They got clear, and got moving.

That can become your story too.

Check out the complete agenda and get the best price on Authority Rainmaker today before the Early Bird Price goes away today — Tuesday, March 31, at 5:00 p.m. Pacific Time.

Previous article: 4 Revelations that Drove Me to Quit My Job and Start a Business
Next article: A Quick-Start Guide to Measuring Your Content Marketing Efforts