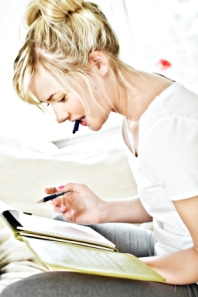 Ask any writer how to write, and they will tell you, logically enough: Write.

Write every day. Write at the same time. Write for hours. Write for 20 minutes. Just show up and write.

You’ve heard this advice before and you haven’t taken it yet.

You meant to. But you haven’t.

This is not entirely your fault, because while the advice is not complicated, it’s nearly impossible to follow.

Mostly because it’s way too simple.

Don’t get me wrong. We love simplicity. Simplicity is great and useful when you want practical steps to solve a problem.

Simplicity is lousy when what you really want is a reason for not doing something.

Why there’s such a thing as “too simple”

A friend of mine has been asking me for years to run marathons with her, so I started asking marathoners for their stories on training and running.

I have favorites. They usually involve blood.

Why? Because marathon running scares me. I don’t want to do it, not really.

When someone tells me a story about collapsing from dehydration halfway up a mountain and having to be hospitalized, it makes marathon running sound difficult. Complicated. Terrifying. With dire consequences for getting it wrong. It gives me a fantastic reason for not doing it.

That’s too simple. That’s the kind of simplicity we love to hate.

Why we like to hear that writing is difficult

Anne Lamott wrote a book on writing, Bird by Bird.

In the book, her students ask her how to become writers, and she describes the writing process in terms that would not be out of place in a psych ward. She mentions, in no particular order, banshees, drunken monkeys, and Nurse Ratched from One Flew Over the Cuckoo’s Nest.

Lamott alludes to autism, hypochondria, and meningitis. She holds a gun to her head. She brings out the machetes.

For writers, this sort of talk is incredibly comforting.

Who, after all, goes to meet their doom with open arms? No one. The fact that we have not yet become writers is a purely practical matter. Writing is obviously one of those painful things best avoided in life, like war, or sunburn.

We enjoy being told writing is difficult. It gives us a reason that we are not doing it. Clearly our aversion to sitting down and stamping words onto the page is merely evidence that we are neither mentally ill nor masochistic, and I think we can all feel good about that.

This sort of self-congratulation lasts about as long as it takes to get to the next chapter, which is where Lamott stops being tongue-in-cheek and starts giving purely practical advice on how to write. And what is this advice?

Why we don’t want to believe writing is simple

If writing is simple, then why aren’t we all writers? Why haven’t we done it yet?

We want to believe writing is complicated so that we have an excuse for not doing it. We want to think that we just don’t get it. That there’s a switch inside us that hasn’t been turned on yet. That there’s a password, a correct time of day, a special brand of computer, possibly named HAL.

What we really don’t want to believe is that we just need to sit down and write.

That’s depressing. We could have been doing that all along.

There must be something else we could do, or better yet, something we can’t do.

It would be fantastic if someone could just come up with a reason that we can’t write, a good reason, a plausible one. Virginia Woolf did her best: she said that to write we must have a room of our own, and a fairly significant independent income.

If you don’t have either of those, you’re off the hook.

We’re comforted when we’re told writing is difficult, because we think this negates the fact that it’s actually simple.

I am not about to tell you that writing is easy. Writing is hard. Writers never stop fearing that what they write isn’t good enough. They can’t come up with good ideas. They come up with brilliant ideas that don’t work. They write terrible things and good things. And they try to make sure that people never see the terrible things, and that as many as possible see the good things.

No writer I know thinks writing is easy.

But no writer I know thinks writing is complicated.

If you’ve been waiting to write because you think that one day someone will give you the advice that makes writing easy, stop waiting. No one can make it easy.

All we can do is make it simple.

Taylor Lindstrom is a freelance copywriter and Assistant Editor of Copyblogger. She's taking lots of notes about how to turn sharp copywriting into a profitable business.