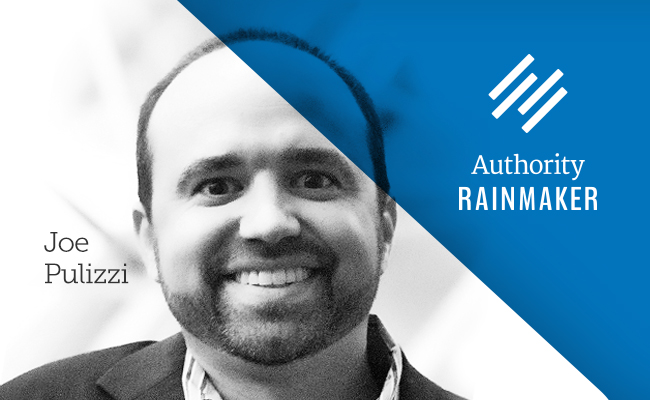 What troubles me about the majority of current content creation activities from companies is the sheer lack of strategy and purpose.

I see a lot of activities — tweets, posts, articles, infographics, and more — that don’t support a real business goal.

Content Marketing Institute’s latest research even found that only 38 percent of all marketers believe they are effective at content marketing.

Your business goal that drives your particular content creation strategy should be to build an audience.

With a loyal audience you can sell, well, practically anything you want.

I believe most businesses are doing it wrong. Today, the majority of businesses put their hearts and souls into developing some amazing product, and then scratch like heck to get people to pay attention to it.

Wow, that seems like a lot of work. Why not just build the audience first and then develop the product once you truly understand the needs of the audience?

I believe this is the go-to-market strategy for businesses in the future — so much so that my next book is about this exact topic.

Don’t believe me? I’m amazed by the amount of contemporary businesses that have had success with this method; build the audience first and then create the product later.

Your own Brian Clark, founder of Copyblogger Media, created content for 19 months without offering a product. Over that time, he worked to build a loyal audience (and succeeded).

Today, Copyblogger Media is one of the fastest growing SaaS (software as a service) companies on the planet.

Today, the Content Marketing Institute has been named to the Inc. 500 list of fastest growing private companies three years in a row.

Billy Beane, as General Manager of the Oakland A’s, had none of the resources of a large-market team for putting a championship baseball team together.

But by focusing on a rarely used statistic, the On-Base Percentage (OBP), he restructured his team. That year, Oakland broke the American League record for most consecutive wins (20) with one of the lowest payrolls in Major League Baseball.

Today, the majority of MLB teams leverage the components of Beane’s philosophy.

Paul Westhead, the basketball coach for Loyola Marymount from 1988–1990, threw out the traditional basketball playbook and focused on shooting as many times as humanly possible during a game.

He held the simple belief that having significantly more shooting attempts than the competition would tip the scales in Loyola’s favor.

Over those three years, Loyola led the country in scoring, with an amazing 122.4 points per game in 1990 (the all-time NCAA record).

Better yet, this small program nearly went all the way to the Final Four that year (losing to UNLV).

In 2013, Chip Kelly left college football powerhouse Oregon to coach in the National Football League (NFL) for the Philadelphia Eagles.

Kelly espoused the theory that a faster-moving offense, which eliminates the amount of seconds between plays, would create a competitive advantage and keep defenses without the ability to substitute.

Through this philosophy, Kelly turned the Eagles program around, and now, into one of the most successful franchises in football. Kelly’s offensive strategy has redefined the league, with many teams converting to his system.

Why did I just tell you these three stories?

Because each of the three make an incredible amount of sense, but at the time, they were “different” than what others did.

In the future, thousands of businesses from around the globe will leverage the power of building an audience as go-to-market strategy.

Why? Not just because you are first and foremost building a loyal audience directly, but also because having a singular focus on audience gives you the best understanding of the most beneficial products to sell.

Whether you already have a product or are just getting started, here are five steps you need to take now to attract and retain future customers of your product or service.

Select a content niche where you have at least a chance of being the leading informational provider in your industry.

Your content should be the very best in your industry — better than all your competitors’ and better than that of the media and publishers in your space.

How can you be the leading, trusted expert in your industry if it is not? The key to that happening is choosing a focused niche where that goal is not out of your reach.

Step 2. Focus all your efforts on building an opt-in email list

Remove other calls to action in your content. Fans and followers are great, but you don’t own them.

I can’t remember a time when email marketing has been more critical or important.

Content delivery on a regular schedule is a promise to your reader. Don’t break your promise.

A blog post should be published at the same time each day or each week, depending on your schedule. Your email newsletter should be sent regularly without fail.

To become the “must see TV” of your industry, your subscribers need to know when to tune in.

To implement this step, you need to add an extra section to your editorial calendar.

An “outcome” is the problem you solve for the reader, and a central focus for your editorial team.

How are you making your readers’ lives better? If your content doesn’t answer that question, try again.

The greatest media companies in the world don’t only focus on digital content. Look at ESPN, the New York Times, or the Huffington Post.

If you want to become the leading media company in your industry, plan to dominate multiple content channels, including digital, print, and events.

It all begins with the audience

No matter what your ultimate revenue source is, whether you sell advertising, paid content, consulting services, or a manufactured product, you’ll achieve your goals with more ease if you focus your content creation energy on building a loyal audience.

Now is the time.

Want to take your content marketing to the next level?

Joe Pulizzi is among the powerhouse lineup of speakers who will be presenting at Authority Rainmaker May 13–15, 2015 in Denver, Colorado. It’s live content marketing training and networking for real-world results.

Super Early Bird pricing is now in effect, which saves you $500 off the full price. The price goes up on January 16, so don’t wait and pay more.

Joe Pulizzi is an author, podcaster, marketing speaker, entrepreneur, father, and husband. Joe is the author of three Amazon #1 marketing category best-sellers, including Content Inc. Joe’s thriller, The Will to Die, is his debut novel.

Previous article: How to Create Simple Drawings to Clarify Your Ideas and Captivate Your Audience
Next article: An Easy Fix for 5 Website Woes that Can Threaten Your Business