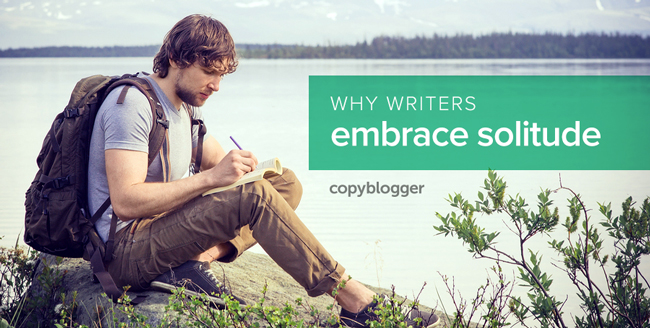 Collaboration is all the rage these days. It’s implied in many words and phrases we love to hate:

And it seems there is no stopping this train. There’s even furniture that encourages collaboration.

Malcolm Gladwell presents a reason for this growing way of thinking: “Innovation — the heart of the knowledge economy — is fundamentally social.”

It’s beyond question that innovation is important for most companies, and if innovation is fundamentally social as Gladwell argues, then the fallout of such a view includes a depreciation of rugged individualism.

In fact, some argue individualism could be dying.

Is the great creative individual a thing of the past?

In the opening chapters of his 1997 book, Organizing Genius, Warren Bennis suggested that we were experiencing the end of the Great Man or Woman.

But who exactly is this “Great Man or Woman?” Perhaps someone like Albert Einstein? A scientist who said:

I am a horse for a single harness, not cut out for tandem or teamwork … for well I know that in order to attain any definite goal, it is imperative that one person do the thinking and the commanding.

Bennis is certainly a pioneer in the field of leadership studies, but when it comes to creativity and innovation, my money is on Einstein.

Collaboration is good — this is better

Don’t get me wrong. I’m not denigrating collaboration.

What I’m arguing for is this: the best work often comes from people who’ve been holed up — away from people.

In an interesting productivity study, Julia Gifford and her crew studied the habits of the most effective people and spotted what they thought was the productivity sweet spot: 52 minutes on and 17 minutes off.

The headline of the article says it all: “The Rule of 52 and 17: It’s Random, But It Ups Your Productivity.”

The article, however, focuses less on the 52 and more on the 17. Gifford emphasizes that the breaks make us more productive.

I’m down with that.

But, when it comes to productivity tips like this and others (Pomodoro or Schwartz), the 52-minutes approach sounds more like my style — basically, don’t interrupt me.

Let me keep pushing and pushing, whether I’m working on my first draft or 13th revision.

Sometimes I work a straight two-and-a-half hours on and an hour off. Yes, without bathroom breaks.

Why the long stretch of work without a break? Resumption lag.

According to Erik M. Altmann from the Department of Psychology at Michigan State University and J. Gregory Trafton from the Naval Research Laboratory, resumption lag is “the time needed to ‘collect one’s thoughts’ and restart a task once an interruption is over.”

Intense concentration is important for both productivity and creating your best work.

You need to find a rhythm that fits your disposition. You might need more breaks and shorter work times. It may depend on the task at hand. Just do what feels comfortable.

If you can, aim to concentrate for long periods of time without interruptions to avoid resumption lag. Push yourself to go longer and longer. See if you’re not a more efficient writer in the end.

There is an element of writing that requires you to ignore the external rewards of writing (the attention, the money) and fall in love with the work itself.

Because writing can be a lonely and thankless job before you hit publish, there has to be a love of the craft that is native to your being. You depend upon your own enthusiasm and not that of anyone else around you.

See, when you kick creativity’s door down — it’s a solo pursuit.

It’s one that takes a self-generated drive to go to work. A desire to see the work done. A desire to enjoy the journey. And to do it all without worrying about the results.

Consider the man who turned Hoffmann-La Roche into a pharmaceutical giant. Who held 241 patents. Who’s credited with discovering benzodiazepines while working on the development of tranquilizers.

Still lost? Of course you are. Then think Valium, Librium, and Klonopin.

He’s credited with discovering all of those drugs. That’s an impressive track record.

Who is this guy?

The man is Leo Sternbach, a Croatian-born, Polish-American chemist. And you’d be wrong if you thought he wanted wealth, fame, or power from his discoveries.

In The Age of Anxiety, Andrea Tone says that Sternbach deferred all external rewards for something else:

And legend has it he worked at the office every day until he was 95.

I love that work ethic. That singular focus. Although he never stated it, I’m sure Sternbach’s idea of retirement was not a lazy day on a beach.

His idea of retirement was a coffin.

We’re talking about a planned, purposeful neglect of everything but the work at hand. A singular focus that requires a low level of interruption. One that you could do day in and day out.

One that you must do or you’ll be miserable.

3. Writing alone allows you to improve

Finally, the third reason why great writers work alone is because they can engage in what’s called Deliberate Practice.

In Quiet: The Power of Introverts in a World That Can’t Stop Talking, Susan Cain writes about the efforts of psychologist Anders Ericsson and his colleagues who sought to find out how extraordinary achievers get to be so great.

All three groups practiced more than 50 hours a week. But Ericsson discovered that the two best groups invested three times as many hours in practicing alone.

In fact, the best violinists said practicing alone was the most important activity for improving their music skills.

Elite chess players claimed the same thing. The researchers discovered that “serious study alone” time was the strongest indicator of success for these elite players.

Grandmasters (the highest rank in chess), in fact, spent the first ten years of their careers investing five times as many hours studying the game alone than intermediate-level players.

As a writer, you could:

And if you don’t know where to begin, why not start mastering the 11 essential ingredients of a blog post by practicing alone?

I’m not totally kicking collaboration to the curb.

What I am saying is that it’s not The Superstar that some would like you to think it is.

The Great Creative Man or Woman is not dying (unless you put her in the middle of an office on a bean bag chair surrounded by 25 other people jawing away about their projects).

Previous article: 3 Resources to Help You Write Thought-Provoking Content that Gets People Talking
Next article: How the Perfect Name Changes Everything